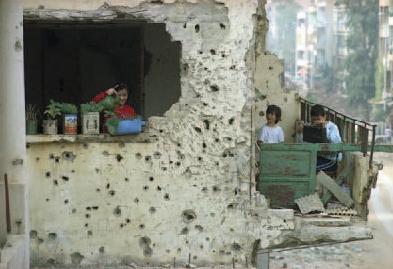 For almost eight years, the Palestinian Civil Defense in Lebanon has assumed an unofficial role as ambassador to the Republic. Bravely, selflessly and often, thanklessly, the men and women of the PCDL have attended many of the nation’s emergencies, working shoulder-to-shoulder with the Red Cross, Red Crescent, and the Lebanese Civil Defense. All too often the unsung heroes of numerous incidents, who are the PCDL?

The aim of the Palestinian Civil Defense in Lebanon is multi-layered but straightforward.

“For the past five years, we have worked to break down the barriers that exist between the Lebanese and the Palestinians,” he adds. “We have a vision, and we are trying to show that the Palestinian camps are not just hubs for drug trafficking and crime. There is also a great deal of good that comes from us and where we live.”

So far, they have achieved their goals with great success. Active in and out of the camps, PCDL operates a 24/7 response service.

She showed her colors in support of Lebanon on many occasions. Perhaps the most significant intervention occurred on August 4, 2020. A date forever etched in the psyche of the country, at 6.07 pm, a massive explosion in the port of Beirut led to death and destruction throughout the city.

“We learned of the explosion as soon as it happened, but no one, not even state emergency services, realized how widespread it was,” Al-Hebat recalls. However, within minutes, he dispatched a team of eight from Burj al-Barajneh to support the victims and survivors.

“We had no idea what we were headed toward,” he said. The team’s immediate response included transporting the wounded and dying to city hospitals.

As the country struggled to control the scale of the devastation, I passed a request to the PCDL to take on a search and rescue role. “We started going through the damaged buildings, examining the apartments, providing first aid to the injured and taking them to the hospital.”

Soon, a second team – this time from Shatila camp – will join their efforts. In cooperation with the Civil Defense and the Lebanese Red Cross, it has become part of a cooperative of nationalities working as one for every human life.

“We spent sixteen hours in one building, working on taking out an Ethiopian girl,” he said. An hour later, we were also able to get a Lebanese man out alive.

As the initial emergency has passed, the PCDL has informed the state of its readiness to continue assisting. Despite the way they cleared themselves during the early hours, and with little regard for their apparent life-saving abilities, they were not asked to return.

While many others have reacted negatively to such a disapproval, the Habit remains optimistic. “I understand the state’s reasons and accept their decision,” he says. Given how fragile the official presence of Palestinian refugees in Lebanon is – albeit a full 73 years after their arrival after the Nakba – he and the British Council for Refugee Leadership have no choice but to accept.

The PCDL has provided regular and welcome support to Lebanon’s fire departments during a seasonal wave of late-summer lawn and forest fires in the country’s mountainous regions. This summer, rarely are the fires that one PCDL unit could not respond to.

With just 350 official numbers across its six teams, the PCDL comfortably punches above its weight. It is easy to identify the causes. Each unit is made up of volunteers, and exists only in the spirit of caring for the community.

Eighteen-year-old Khaled is an ardent member of the Burj Al Barajneh unit. “I just want to help people,” he says. As a Palestinian in Lebanon, there are very few outlets for me to support others. Civil Defense gives me this opportunity.”

In contrast, the PCDL has proven to be supportive of Khaled. “I have changed since I joined,” he admits. “I learned a lot about myself and my abilities along with learning how to help others.”

As part of its community integration, PCDL partners with highly successful drug addiction programs and encourages recovering addicts to join them. “It gives people a purpose, a reason to stay clean,” says the habet. In fact, his predecessor as head of the Burj Al-Barajneh unit was a recovering junkie.

Beyond his main interventions