Displacement in times of crisis 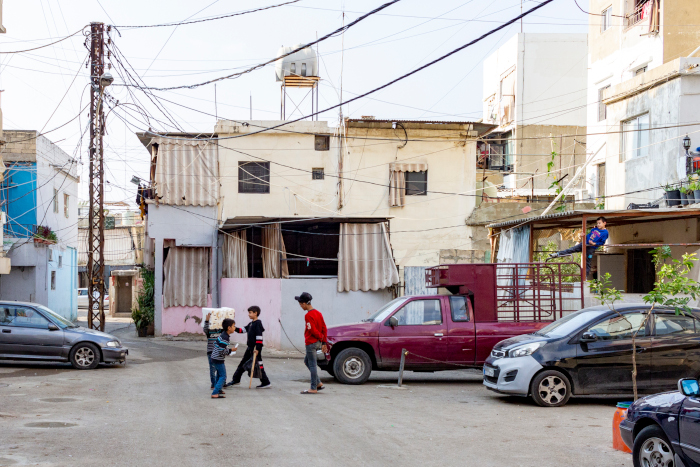 Marginalizing the Marginalized: The silent screams of those left behind

Many Palestinian refugees live in the country’s twelve refugee camps. Once places of sanctuary, today, conditions in the camps are dire and characterized by overcrowding, poor housing conditions, unemployment, poverty, and lack of access to justice.

As Lebanon labors under the strain of an ongoing economic crisis, conditions for those living on the other side of camp walls and within the host community rarely rate much better. As the marginalized sink deeper into poverty and social obscurity, a new underclass of Palestinian refugees is being created.

“We left our home behind and have lived here for the past two years,” says young mother-of-two, Haya. She walks us through what passes for her family home. With no furniture, three thin, clearly tired rugs are thrown onto a bare concrete floor. Haya beckons us to sit. There can be no offer of sweet tea – she hasn’t had tea in the home for more than a week and sugar for many months – but what she lacks in beverages she more than makes up for with her welcome.

Married to a Syrian, Palestinian Haya regards herself as fortunate to have found this derelict house on the edge of Nahr el-Bared camp. The family is largely left to fend for itself and, while they pay no rent – for sure, none could reasonably be charged – she points out that “Our home has no running water, and no electricity. We cook any food we’re able to buy over an open fire”.

Fathered by a Syrian, it follows that their children are Syrian. “They put us at the bottom of every list when it comes to giving things out in the camp,” Haya comments. “As life goes on around us, I’m left to sit and worry what will become of my family.”

While Haya continues to prefer what she perceives as the comparative safety of the camp, for others, dire living conditions have compelled them to move out and into Lebanon’s towns and cities.

One such is 38-year-old Rihan Mohammad. With a face lined by years of poverty and eternal struggle, this Palestinian mother-of-four recently moved out of Ein El-Hilweh camp and now lives – rent-free – in a single room deep inside Saida Old Souks.

Her home is over a century-and-a-half old and accessed through a narrow, heavy wooden door. Across the floor flows a constant trickle of running water. The room, lit by a single bare light bulb – using electricity provided by a generous local shopkeeper who ran a cable through to Rihan’s ceiling – is silent.

“My husband is in jail,” she begins. “With no money to feed my girls, I decided to move here because the Lebanese who visit the souk are more generous than anyone who lives in the camp.” Rihan, and her children, now survive on food handouts from passers-by.

“I receive no support from NGOs or other agencies,” she says, “so I sit outside my door all day relying only on people’s kindness. Still”, Rihan smiles, “life here is better than life in the camp.”

Twenty-eight-year-old Kassem lives bordering Ein El-Hilweh. He’s been in this neighborhood all his life but has never experienced such hardship. With two young babies to feed and clothe, he’s been out of work for the past year, and his circumstances have forced him to move back in with his parents.

Although married to a Lebanese, he and his daughters cannot benefit from any support that may routinely be provided to a host national.

Trying to mitigate his family’s desperate conditions, he is driving himself further into debt. He admits to having actively sought to “sell a kidney” but could not find a mechanism through which to arrange it safely.

“One day we eat with my parents, the next day with my wife’s sister,” he says. “I’m not sure how long this can go on though – they’re struggling to support their own families. We’re not at the point of huger yet, but it surely can’t be long until this changes”.

He continues, “Life is bad for me, but I see an even darker future for my children. I’m twenty-eight and at a dead-end in my life – and I’m not the only one in my community who feels this way”.

Palestinians in Lebanon have long ranked amongst the most vulnerable sectors of society. Today, however, Palestinians are increasingly disenchanted, disempowered, and discriminated against.

Amongst the marginalized, there is now a stratum of super-marginalized. Those whose lives are unthinkably lost and who live through days and nights of abject deprivation – both in and outside the camps. Theirs are the silent lives. Theirs of the lives of the left behind.