A history of the Nahr al-Bared camp’s relationship with its surroundings, fractured by the battles of 2007 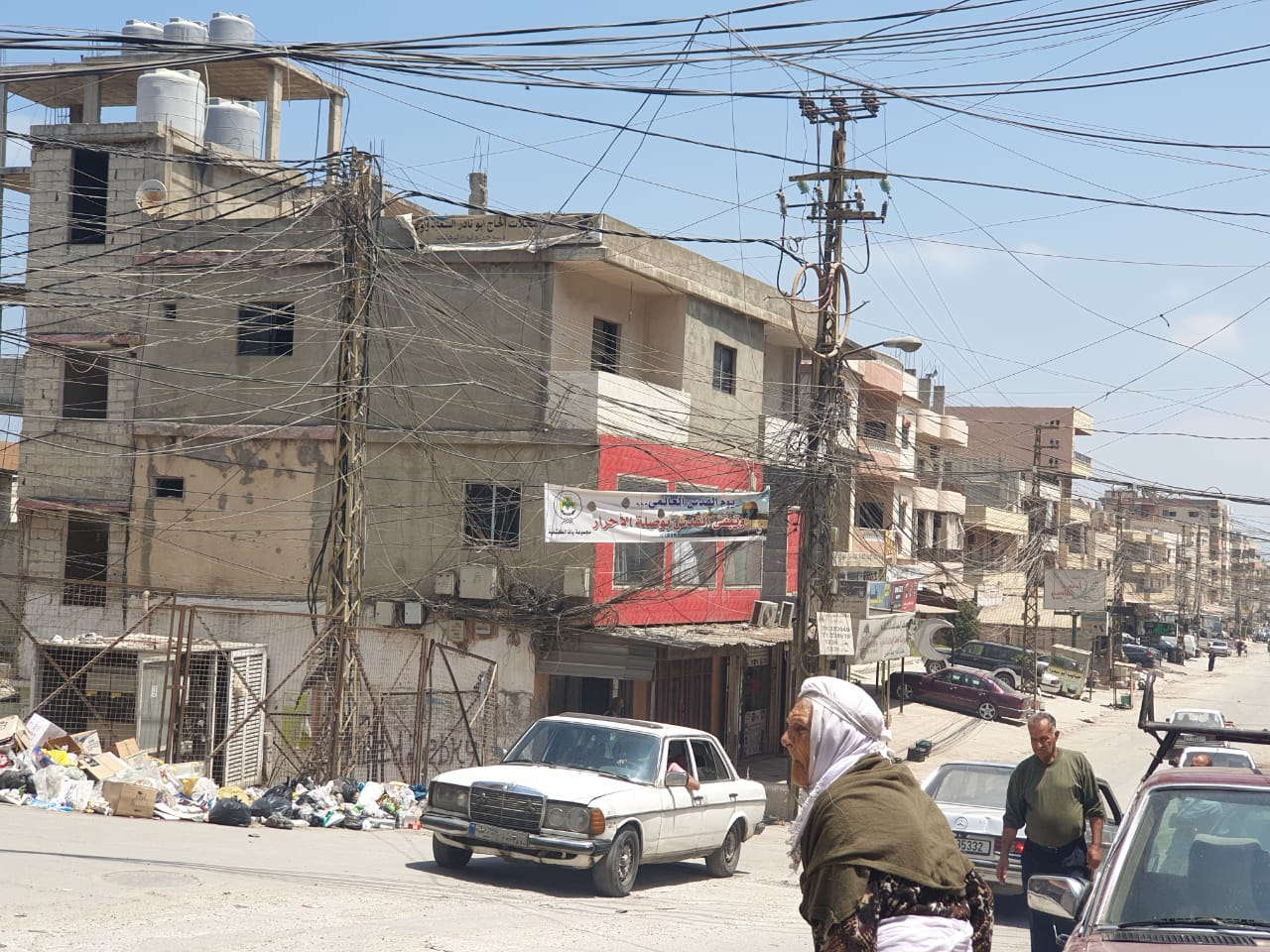 The Nahr al-Bared Palestinian refugee camp has lived through many phases of changing relations with its geographic surroundings in northern Lebanon. Upon closer scrutiny, it appears to have taken a downward path in terms of greater isolation for the camp’s residents, who are still paying dearly for the battles that took place in 2007 when violent clashes erupted between the Lebanese army and Fatah al-Islam, which led to the camp’s destruction and the displacement of thousands of its residents.

In discussions on the relationship between the ‘sons of Al-Bared’ and the surrounding areas, many identify 2007 as a pivotal juncture in this relationship, between what came before and what came after.

Today, it is enough to arrive on the outskirts of this camp, which is within the Mohammara municipality in Akkar, to perceive the features of isolation through strict security barriers at the eastern, western and southern entrances and exits of the camp, imposed by the Lebanese army since the camp came under its direct authority after the 2007 battles.

Entering the camp has become a difficult ordeal for Palestinians and Lebanese alike and requires authorizations, security permits and identification.

However, that soon raises the following question: How do the children of the “Bared” coexist with their surroundings?

Characteristics of its location

The Nahr al-Bared camp has much in common with its surroundings in several respects. At the forefront of these is the shared poverty and deprivation of basic living necessities, dilapidated infrastructure, high unemployment rates, and enduring frequent bouts of violence and battles, albeit in different contexts, but always with the same results. The north, in general, with its regions and camps, is stereotyped as having security, sectarian, social, political, and cultural dimensions that have affected its relationships and the way others perceive it.

It can be said that perhaps the Nahr al-Bared camp and its surroundings share the grievances that are common in Lebanon, albeit to varying degrees.

Within these shared aspects, there are periods of harmony, and at other times alienation, the causes of which tend to not differ from the grounds of the common attributes. In addition, there is the difference of identity between Lebanese citizens and Palestinian refugees, who found themselves pushed, in that tragic year of 2007, into battles that they as individuals did not plan but instead paid for in blood, destruction, arrests, and a deep wound that has not healed with the passage of some fifteen years.

Many who lived through the stages of the Al-Bared relationship with its surroundings speak of it, some revealing its identity, and others being more reserved. Still, all agreed on the complex nature of this relationship.

The camp’s dire living conditions prompted many young Palestinians to leave in search of an opportunity to live outside its walls. Osama (a pseudonym), 34, found a job in Beirut. Still, the camp is cemented in his memory as a ‘security fortress’ isolated from its geographic and demographic surroundings, with the 2007 battles counting as just one of several reasons, which include:

Osama notes that the Al-Bared was previously an important economic center for the Lebanese due to its strategic location and proximity to the Syrian border. Its location on the coast has historically made it a central point for smuggling operations into Syria, particularly tobacco, in partnership with leading Lebanese personalities. However, the battles of 2007 wiped out all its geographical advantages.

Palestinian activist Nasser Qamar, 30, who has lived in the Nahr al-Bared camp since childhood, agrees. He has not forgotten the events of the 2007 battles, which are physically imprinted on the palm of his hand, where he was shot. Before 2007, he says, “we did not hear or feel affected by the presence of security checkpoints; we used to cross back and forth toward the neighborhood without any problems.”

In the years before the battles, the Nahr al-Bared camp had a robust economic relationship with its neighborhood that sometimes-surpassed social relations, which were not without intermarriage and mixed marriages, specifically with the camp’s surroundings in Miniyeh and Akkar.

Qamar shares stories told by his relatives and camp residents of their association with the surrounding areas as a purely economic relationship, with the camp being a central, vibrant spot in the north where residents of neighboring areas came to buy and deal in general trade, foodstuffs and clothes. It was like a small commercial market that never slept, and even some of Tripoli’s residents came for wholesale purchases.

After 2007, the situation was turned upside down as the bloody battles affected the camp’s relationship with its surroundings. Qamar believes that the camp’s residents fell victim to a misconception of the neighborhood, which harbored a veiled accusation that the residents of Al-Bared were directly involved in confronting the Lebanese army and killing its members, as many members were killed from Akkar and its environs.

Therefore, those battles created a deep rift between the camp and its surroundings, while both sides, according to Qamar, were victims of those bloody events.

Those events, and the subsequent failure to complete the camp’s reconstruction, which was financially sponsored by the donor countries at the Vienna Conference in 2008, caused a rift between the camp and its surroundings. In the eyes of both its residents and neighbors, it took the persona of a large prison, within which the signs of misery, destruction and suffocating factors of isolation reside. Naturally, the economic relationship between the camp and its surrounding areas has been affected, and both the people of the camp and its neighbors consider it nonexistent.

Lebanese civil activist Mohammad al-Dhaibi, who resides in the town of Miniyeh near the camp, believes that the high residential buildings that were constructed after the camp’s battles covered the facade of the camp, separating it from the public road and consolidated its isolation, and that “some influential people tried to capitalize on the Lebanese people’s resentment over what the camp witnessed.”

Al-Dhaibi said the camp remained overcrowded and congested with its limited geographical area. It expanded vertically and not horizontally “because a large segment of the residents in surrounding areas refuses to rent homes to the camp’s residents, except on a limited personal level.” He points out that the army checkpoints at the entrances to the camp constituted a psychological factor for the residents of the nearby areas. Most of them prefer not to approach or enter the camp because of the strict security measures.

The Lebanese activist believes that the camp’s residents are suffering from a great injustice, in addition to the extreme poverty inside and the scarce job opportunities. He says that the camp has lost its social and economic integration, as the battles destroyed it and subsequently perpetuated by security factors. He holds several parties responsible for this, the first of which is the international community, UNRWA, the Palestinian organizations and the Lebanese state.

However, Khansa Ghanoumi, a Palestinian woman who resides in the camp, considers that these battles did not destroy its relationship with the neighborhood “because it is a historical relationship sanctified by intermarriage, brotherhood, social convergence and trade,” noting that what unites the camp with its surroundings is advocacy for the Palestinian cause, and their interaction together in solidarity and support when the pace of Israeli aggression intensifies in Palestine.

Meanwhile, the Al-Beddawi camp, which at about 7 kilometers away is the closest Palestinian camp to the Al-Bared, formed the largest host for the camp’s residents after the displacement of about 27,000 Palestinian refugees following the fighting of 2007. Most of them went to Beddawi, while some headed to Lebanese areas such as Miniyeh and some towns of Akkar. Others went to the Beirut and Sidon camps. This Palestinian ‘displacement’ inside Lebanon also contributed to creating a new relationship with the surrounding areas based on the concept of an alternative shelter, host, and protection from the horrors of bullets, cannons and destruction. They strengthened their social and commercial relations in the places where they sought refuge, in light of their long wait for the completion of the reconstruction of their camp so they can return to their homes.