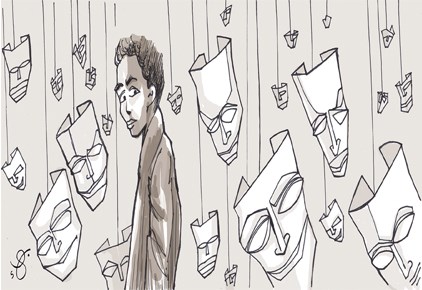 Palestinian writer
Omar Mustafa was 13 years old when he left the village of Az-Zeeb in Acre, heading for Qana. The Arab Salvation Army commander, Abu Ibrahim, ordered the women and children to leave the village until the battle with the Zionists ended and it was deemed safe for everyone to return again. The battle did not end, or perhaps it did not happen, and he never returned to Az-Zeeb. The family initially chose the town of Qana because they knew people there, and subsequently moved to the area of El-Buss where Armenian refugees lived. At that time, Armenian families began to move to Anjar and Beirut, leaving their homes to the Palestinians for symbolic sums of money.
Mustafa Darwish Ahmed, who would later change his name, began working upon his arrival to support his elderly parents. He sold chewing gum at a nearby bus stop before he became an electrician and worked in a shop that sold refrigerators and washing machines owned by Tyre resident Ibrahim Dabouk.
In 1959, Ahmed was no longer a child. He married and was forced to find an additional source of income because his salary of 100 Lebanese punds was no longer enough to keep a roof over his head and support a family. He followed his passion, one that circumstances did not allow to grow.
His passion for drawing drove him to acquire a camera, learn how to use it and develop the film before he took it to the streets, where he snapped pictures of people for a quarter of a lira per picture. This work secured him almost 300 pounds per month. It was then that he decided that photography was his profession, so he rented a shop near the gate of Tyre that he called “Studio Galilee”, an homage to his sense of belonging and nostalgia to his hometown. From then on, he became known as Mustafa Galilee, developing his photography skills by learning how to touch up photos with charcoal and oil paint from Mohieddin Abu-Zahar. He also drew inspiration from the artistic techniques of former photographers, namely Raji El Hajj, whom he considers a true artist.
In 1965, he left the studio and traveled to Libya, only to return three years later to reopen it. Cinematography became his passion and he started to read about it, learning the methods of animation and handling 8mm films, before he bought a video camera that he used to shoot weddings and edit wedding videos.
He was one of the early adopters of this technique, continuing his work in the city of Tyre as a regular photographer and an events photographer until 1988, when he was forced to flee to Wadi al-Zayni as a result of battles between some local parties before returning to travel to Libya once more to open Studio Galilee there with his sons, who inherited the profession.
He returned to Lebanon in 1994 and decided to develop his work, so he learned to edit photos using Photoshop from the computer engineer Ahmed al-Natout of Saida. He began shooting with an analog camera and developed the photos before scanning them on the computer, editing them, and adding effects to them. This continued until he bought a digital camera in 1998 with which he maintained his digital journey until he closed his shop in 2015 to travel to the United States, where his children opened Studio Galilee – North America Branch.
Later he returned to El-Buss camp, where he decided to practice drawing, his first passion, with the encouragement of his son Dr. Mohammad, who lived with him, and develop it. In the beginning, he used canvas to draw his paintings, which depicted landscapes of his first memories in Lake Az-Zeeb located in the Palestinian village from which he came. He then moved to painting on the walls of the camp and of the city of Tyre, where many testify to the extent of his imagination, although that experience of his only began a year ago.
Mustafa is eighty-four years old now and he spent most of his life revealing the beauty of man and nature through his art. He confirms that he will live what his paintings and murals on the streets and in people’s homes have portrayed.
Long live Mustafa!
Previous post
Next post