Camps: Between Marginalization, Neglect and Exploitation 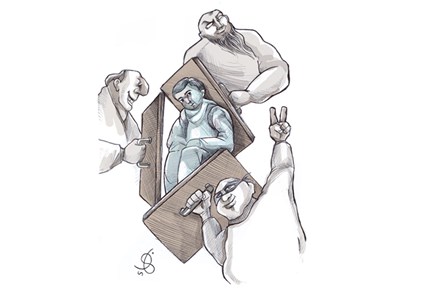 Incidents moving from one place to another and from a camp to its alleyways … The scandal is that we are talking about that as if the “mother of all battles” is being waged with all kinds of weapons in a narrow alleyway, and a truce between two neighborhoods, or establishing a cease-fire in the heart of a camp … What’s worse is the reckless disregard for people’s security, lives and blood, and the material and psychological damage, and high moral and political costs. It is superficial to summarize what is happening as a mere coincidence and baltaja, or isolated incidents not interconnected or sharing a timing.
We are talking about a phenomenon that arose and formed in a special environment of its own with three interacting elements: a festering social reality, illegal arms, and abhorrent political exploitation. These are elements that cannot be dissociated from their relation to the juncture, accompanied by social banes with the aim of eroding the society, distorting the national identity and dispersing the camps to make them an element of rejection for their people and a scarecrow for their surroundings.

Thus, they gain new symbolism moving away from an image of a nationalist cause to a security-related one that no one can tolerate. The correct, simple and bold political sense starts from the introductions that produced this dramatic scene and stops at the personal responsibility that is surely of our own making. The policy of non-policy, the custodial policy, the policy of marginalization, closure or discrimination has led to the ejection of the Palestinian society from the circle of life, whether with high unemployment rates or living below the poverty line. It has also led to the emergence and development of pathological phenomena, for the camps to be labeled as outlawed, although they are a victim between the anvil of a policy of marginalization, reduction and oppression, on the one hand, and the hammer of neglect, illegality, and disgraceful and condemned violence, on the other.
The seriousness of the solution begins with a central question: Do we want the camps to be within the scope of the law or outside of it?
The process of social control, the organization of people’s lives and interests, and the achievement of sovereignty and justice require the rule of law, and adherence to binding rules and provisions that safeguard individual and national interests. But without ignoring the political dimension of the law, that is, awareness of the political root cause of the existent phenomenon, that is, that the Palestinian presence in Lebanon is temporary and coercive. Its peculiarity is not contrived, but has been created by tripartite economic, political and security-related suffering. It is a victim that is not directly responsible for its protracted displacement and the result of political failure to achieve its nationalist rights and the right to return. It is also the victim of international dereliction, such as the decline of UNRWA’s services and the threat to its future, and the victim of the Lebanese closure policy, because the security situation should not be invoked to shirk from humanitarian obligations. A clear policy is necessary to be outlined in a cabinet statement, or at least through the adoption of the recommendations of the Lebanese Palestinian Dialogue Committee in this regard, as a positive signal that paves the way for the implementation of the paths pursued.
Ending anomalous and outlawed phenomena requires the termination of the negative environment that has been produced. This begins with the law of rights and duties, because recognition of the concept of duty precedes the concept of rights. A duty is a duty, not a dialogue or an option; it is an appreciation of the self and the other. The obligation to respect the balance between rights and duties is fundamental and cannot be dissociated from each other.

Strengthening the conditions for human security so it becomes a general need and a particular one for Palestinians in Lebanon, especially in the camps and outside them, needs social relations, civil and human life, and communication with others without barriers or obstacles or cultures, partisan or sectarian. It has psychological, educational, medical, health, social and political needs, including anxiety over its political future, because it is an integral part of the Palestinian nationalist project and the original component of the Palestinian cause. This future is part of the concerns of Palestinians, especially of the young generation, which is the backbone of the camps. It looks suspiciously at its political existence, i.e. the loss of a sense of human security as well. Every day they experience the harshness of making a living, mobility, work, housing and the bringing in of construction materials. This leads to a growing sense of persecution! The responsibility of the Palestinian political leadership and the Palestinian society depends on the ability to play multiple roles and functions, encompassing all aspects of life, strengthening social ties, and managing people’s affairs in relation to all parties, while the political role is the most important in this regard, in that it exercises politics rather than the labels of politics in the creation of contention, discord and factional gains at the expense of the security and life of society.

The duties of sound policy are to control continuous change in the structure of the camps and their social and civic composition.
Thus, the society can play a role in protecting itself, expelling flaws, isolating anomalous cases and sabotage tools, immunizing individuals against the sway of destructive ideas, and putting an end to security offenders and those with precedents and foreign agendas in close cooperation with the Lebanese State. It can push the State to assume its responsibilities without slackening or negligence, to mitigate the risks of violent social unrest. Based on this, the expressive function of the political authority is achieved in actions rather than words, by representing the interests of its people and being in line with their goals, and allowing them to participate to fulfill themselves and defend their rights and issues.
Tripartite repression: The lack of social security, the chaos and arbitrariness of arms, and political anxiety, feed into the destruction of violence and a dangerous game for gains of asserting and dismantling the relation between means and goals and the tools without politics!
The pressing question, whether voiced loudly or softly, is now: what is the value of arms outside this “nationalism”?  What is the point of defending a just cause without the weapon of awareness, knowing that the attrition of the nationalist situation turns us into things and forms that are closed, fragmented and isolated, which contributed to the emergence of closed terrorist cases that targeted the assassination of the nationalist idea? It may be argued that “brutal force can only persuade ideas if the ideas give in to it.”
The radicality of the long-term solution is through politics. Arbitrary arms and the security turmoil are the evidence but not the only one to explain the phenomenon of violence, which has a social and political dimension that is inseparable from the psychological dimension. The key to ending violence is based on social development, eliminating the causes of lawlessness and the loss of justice.
Previous post
Next post