Dar El-Nimer: A token of gratitude from the Palestinian people to Lebanon 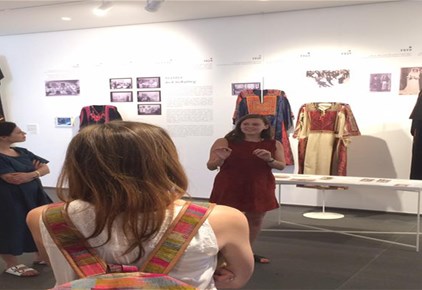 For 40 years, Rami Rifaat El-Nimer collected the history of his country with pictures, manuscripts, paintings, icons, documents, ancient coins, and stamps. He archived it all in such a way that depicts the whole life of the Palestinian Arab, carrying the heritage of Islamic and Levantine culture with its various religions and beliefs and highlighting the development of the political history of the region, and more specifically the history of Palestine.
“The history of Palestine transcends all ages, and the Palestinian identity that Israel is trying to abolish, is engraved deep into these ages” as he explains.
Rami El-Nimer was born in Nablus, Palestine –“as his forced migrant father Rifaat Sidki El-Nimer insisted, so his son, his children and grandchildren, as well as every following generation will keep an identity to resist attempts to suppress the memory of Palestine by preserving its identity and heritage.” He did not keep his own collection for himself but was keen to share it with others. He founded Dar El-Nimer for Arts and Culture in 2016, to “rebuild a new narrative for the region that is more coherent and comprehensive.”
His passion for collecting artwork began at an early age: manuscripts, old coins, ceramic pieces, glass masterpieces, arms and armors, textiles, metal tools, wooden items inlaid with mother of pearl, crosses, and Armenian pottery from Jerusalem, as well as modern and contemporary Palestinian works with orientalist paintings and drawings.
He wanted to collect works “harking back to a time when borders were open, and the cultural exchange of art and ideas was unimpeded… and to become a commemoration of survival and resilience against any attempt to erase memory and distort identity.”
Rami El-Nimer chose to display his collection in Lebanon, “the main lighthouse of the East, which embraced intellectuals and artists, providing them with protection and gave them a platform to express themselves in every way…”
He also chose Lebanon “because Palestinians there are more persecuted than in any other host country.”
He wanted Beirut as a permanent place to exhibit his collection “a token of gratitude from the Palestinian people to the Lebanese”. Mainly because on one hand Beirut and more specifically the Ras Beirut region were throughout the fifties and afterwards a center of coexistence, representing the Arab world in its diversity and religious, cultural and political affiliations. On the other hand, because the American University of Beirut was a symbol of this coexistence and a forum for serious and profound cultural and intellectual exchange.
His passion for the Lebanese capital led him to establish a completely independent cultural center “not part of the Palestinian establishment, nor a prisoner of any thought related to any issue other than the international Lebanese Palestinian Arab human.”
In this center, Rami El-Nimer wanted to reveal the other aspect of the Palestinian people, its cultural, creative, intellectual, economic and entrepreneurial heritage, tracing the path of its pioneers who played a major role in Lebanon’s prosperity. “It is true that I am not a refugee, not affiliated to any party or cultural figure, but rather an economist and banker” says Rami El-Nimer to “Jousour”, “but I am first and foremost a Palestinian, and I am proud of my identity, my heritage and my culture”.
“It is an individual attempt to show a different image … and rebuild a culture for the marginalized generation who is unable to visit museums, cultural centers, and libraries, and steeped in the fast-moving rather inaccurate information technology.”
According to Rami, “Dar El-Nimer is an artistic and cultural platform that we decided to establish on behalf of the Palestinian people as a token of civilized appreciation to Lebanon. The Palestinian people, after three generations on the Nakba, lost their trust in their civilization and legacy since they were forced to flee their land, and became in the eyes of the hosting countries, refugees without history and culture, as the Zionists promoted. Therefore, this initiative is somehow also to restore the Palestinian honor and involving them in working towards a better future.
Dar El-Nimer is also one of the largest Palestinian institutions for educating Palestinians in Lebanon in the best universities and educational institutions and for providing job opportunities for outstanding students. The Dar is currently responsible for the expenses of educating 160 students at the American University and 120 students at the Lebanese American University, through an institution founded by Rami’s mother and run by his wife, Malak El-Nimer, in addition to managing centers for children and the elderly inside the Burj Al-Barajneh, Shatila and Nahr Al-Bared camps to reveal the skills and creativity of camp communities.
“Dar El-Nimer” is also an extension of the struggle of “Abu Rami”, the successful banker Rifaat Sidki El-Nimer, born in Nablus in 1918, who was terrified to witness Palestine fall into the hands of Zionism in 1948, who transformed his forced emigration from Palestine into a way of life he pursued with dozens of development and educational projects that he sponsored, in addition to the cultural contributions he provided. He intended to break the barriers that restrict the lives of people living in camps, and refugees….
“Culture is as important as education in the composition of the Palestinian identity in exile. Our nation, Rami recalls his father’s words,  faces numerous concerns, difficult realities and great challenges, and it must rise and be able to confront it, provided it is first aware of its own capabilities… especially as it is fighting a conflict that can only be beneficial through the weapon of knowledge, consciousness and awareness.”
Extracts
In Dar Al-Nimer, “Actions tell the story of survival and resilience against attempts to erase memory and distort identity.”
It is a gift from the Palestinian people to the Lebanese people … A completely independent center “that is not a prisoner of any thought related to any issue other than the international Lebanese Palestinian Arab issue.”
Previous post
Next post