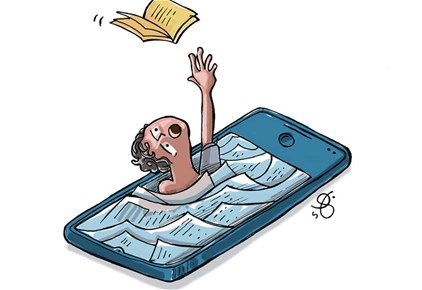 Muhammad lives in Burj al-Barajneh camp in the southern suburbs of Beirut. His teachers at Al-Quds School had always known him as an energetic and diligent student. Still, his participation since the beginning of the past school year has been almost non-existent, as well as his lack of interaction with his classmates in the ninth grade.

His apparent, if virtual, absence raised his teachers’ alarm. Then sympathy replaced surprise when they learned that his reluctance was due to his family’s inability to secure a second smartphone in a home that includes three other children, all at different levels of study.

Although teachers cooperated to secure a device for Muhammad, the problem is not seem limited only to this student. Instead, the poverty compounded due to the widening unemployment among Palestinians in Lebanon due to many factors makes the issue far more widespread.

The ‘Population and Housing Census in the Palestinian Camps and Gatherings in Lebanon’ which was supported by the Lebanese-Palestinian Dialogue Committee in 2017, indicated an unemployment rate of 19.4 %, although the evidence suggests that the percentage increased in the following years, especially with the deepening economic collapse in Lebanon.

Muhammad is one of the approximately 44,500 Palestinian students in Lebanon’s schools, 36,000 educated in UNRWA schools. Since its introduction in March of 2020, the distance education policy has affected these students’ academic achievement. The Agency was able to secure a few hundred tablets, but they were not enough to meet the needs of Palestinian students.

Ahmed Kayyal, a professor at an educational support institute in Burj al-Barajneh camp affiliated with the Women’s Charitable Association, does not deny the many advantages of distance education, including pushing students and parents to learn some techniques in technology, research and others, and strengthening the partnership in the educational process between parents, school and students. Still, nevertheless, the cons outweigh by far the expected pros.

According to Kayyal, Palestinian camps and gatherings lack the necessary infrastructure to facilitate the process of distance education, since the internet is constantly cut off, as well as the electricity, “thus depriving thousands of students from continuing their academic education. This also allowed thousands of others to invoke the reasons above for dropping out from schools, without even verifying the credibility of their arguments”.

He points out that in distance education, it is not possible to ascertain the mental presence of students, unlike the case of in-class education. Especially since the factors of poor concentration in the camps are numerous, “considering the proximity of houses, and their smallness, the noise will not allow the Palestinian student to focus enough mentally for the necessary achievement. Therefore, education in real classrooms is a necessity and an indispensable need for Palestinians in Lebanon.”

An UNRWA source, who wished to remain anonymous, spoke to “Jousour” and said that there are many negative aspects to distance education, and it has had an impact on the educational process, “although UNRWA tried to avoid them through many measures, including making adjustments to the study support program in line with emerging problems. In each school, a psychological and social support team was formed, following up on parents and students and trying to find different ways to alleviate the psychological burdens left by the atmosphere of the past two years and for parents to be fully involved in the teaching process, in addition to the confinement that was imposed at different times”.

The source admits that with the recent resumption of hybrid education, “it turned out that distance education was not feasible for reasons that are often beyond the Agency’s control. Therefore, from now on, work must be done to identify the skills that students lost during two years of interruption from real education. As an educational administration at UNRWA, we expect to detail the study of curricula to consolidate years of study and make up for missing skills and lessons that students should have learned. This will be followed by a thorough assessment process for all students.”

He added that in 2020, “an assessment was conducted, and we came up with two curricula for two types of students Catch Up1, Catch Up 2”. However, these two curricula were aimed at restoring missing basic skills. Still, now the issue is more complex and comprehensive. A change must be made at the core of the curriculum, especially in elementary grades. It is also necessary to train 2082 employees working in the education sector in Lebanon to keep pace with these curricula, and we have practical experience in this field. It began at least after what is known as the two-year war (1975-1976) and extended to the change in some wars and battles in curricula to compensate for the educational shortage that afflicted students.

Suha Hussein, social activist and director of the Nawat Education Center, believes that there is an additional problem, represented by the almost halting of the educational support program launched by UNRWA years ago that focused on people with special needs, those who are behind in school, and those with psychological crises, through assistant professors (Shadow Teacher) “This [program] achieved important successes before the lockdown imposed by Covid-19, and we are talking about a few thousand students. This program is almost stopped, and in addition to the academic delay of many students, it has caused psychological pressure on their families. She points out that many students lost communication skills due to this disconnection from their colleagues and professors”.

Zahira Hassan student, a refugee residing in Shatila camp, expresses her grief at the loss of a play space provided by the Haifa School near the camp. Today, she spends most of her time on the phone because there is not enough space to exercise or play in the camp. Her mother, Mona, intervenes in the conversation to say that she is now afraid that her children will become obese because of this, as happened with other students. She adds that she is enrolling them in private tutoring programs for the first time, which is causing a strain on her family’s budget.

Many fear that the gaps caused by distance education will lead to an increase in the illiteracy rate among the Palestinian community in Lebanon, especially since this percentage is 7.2 %, according to The “Population and Housing Census in the Palestinian Camps and Gatherings in Lebanon -2017, while it is 2.6 % in the West Bank and Gaza Strip, according to the report of the Palestinian Central Bureau of Statistics issued in September 2020, and it decreases to 0.7 % in the age group (15-29 years). According to many Palestinians, these fears should prompt profound cooperation between three parties – the Lebanese state, UNRWA, and the Palestinian society in Lebanon with all its elements and groups – to avoid a more serious situation in future.