For a successful confrontation of the Deal of the Century 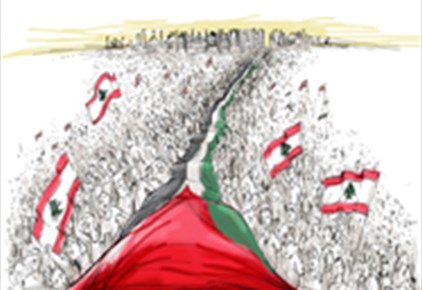 * Chairman of the Lebanese-Palestinian Dialogue Committee

In the so-called “Deal of the Century”, President Trump does not offer anything to the Palestinians. On the contrary, he offers Palestine and its people as a gift to Israel and its settlement expansion project. It is true that this deal was written and formulated by Americans, but in reality it was written with an Israeli decision and spirit that responds to the perspective of the ardent defenders of the Zionist right-wing extremist project, who only see in Palestine a sorted space for their aggressive colonial ambition.

The Deal of the Century took everything from the Palestinians: the land, Jerusalem, the right of return to their homeland, the independent state and sovereignty, the freedom of education, opinion and movement, as well as their political achievements, foreign relations, and security… This poisoned deal robbed the Palestinians of dignity, ambition, and dream, and offered in return nothing but promises and delusions to improve their living conditions, as if the conflict with Israel, translated into continuous wars, was merely a dispute over living conditions and not on land, freedom, the right to life, and the establishment of the independent state with Jerusalem as its capital.
From a Lebanese standpoint, the deal ignored all the demands of the Lebanese government and people, the most important of which is finding a just solution to the Palestinian cause, based on the Arab peace initiative, the right to return to places of displacement, and the rejection of settlement in Lebanon. Lebanese and Palestinians fear the policies calling on the imposition of the deal’s plans as a fait accompli, bypassing the Palestinian, Arab, Lebanese and even international voices, betting on the overall Arab weakness and disintegration, as well as the economic and political collapse that Lebanon is experiencing and the general Arab and international stances in general towards the American injustice and oppression.
The question at hand here is how will Arabs, Palestinians and Lebanese confront the Deal of the Century?
The general outline of the Deal of the Century was announced at least a couple of years ago, and its main features and trends emerged at a very early stage. Its details did not surprise anyone, which means that the concerned parties, especially the Palestinian, Lebanese and Arab, were supposed to have prepared plans to address such deal, but it is clear that none of this happened. Would we expect that the announcement of the terms of the deal now will lead to the formulation of a concrete road map to confront it at various levels?
The primary responsibility for challenging the Deal of the Century will necessarily fall on the Palestinians, leaders and people. The main step in this course starts from ending the status of national, political and geographical division, unifying the vision and defining the forms and fields of confrontation, to protect the achievements of the Palestinian struggle, which is now more than a hundred years old. It also included pursuing an active and effective diplomatic efforts based on international law and relevant United Nations resolutions, which guarantee the right of return and the two sates solution. What is certain is that the basis for Palestinians facing this deal is to expand the area and forms of resistance in occupied Palestine, which requires consensus from the Palestinian authority, factions, and political forces looking into the forms and mechanisms of this confrontation.
From a Lebanese perspective, and in order to face all possible external pressures, especially from the economic standpoint to force Lebanon to proceed with the deal plans and settle the Palestinian refugees on its land, the verbal rejection must be exceeded, and efforts must be carried out in two directions. First on the diplomatic level in order to gain the support of international friends, and organizations for Lebanon’s stance, without neglecting benefit from the potential Lebanese diaspora lobbying around the world.
Second, by acknowledging the basic rights of Palestinian refugees in Lebanon and improving their living conditions, and to support UNRWA, both of big importance to consolidate and strengthen the Palestinian and Lebanese positions .Thus in order to tell the world that we are firmly against resettlement, regardless of all pressure exerted on us. We need to emphasize on the respect of the international humanitarian laws recognizing the rights of refugees to live in dignity and their contribution in support of the Lebanese national economic cycle.
The main pillar to face the “Deal” is to develop a joint action plan that set strategic goals in response to the American and Israeli plans beyond the repeated slogans and words of solidarity.
Previous post
Next post