How Israel perceives what is happening in Lebanon 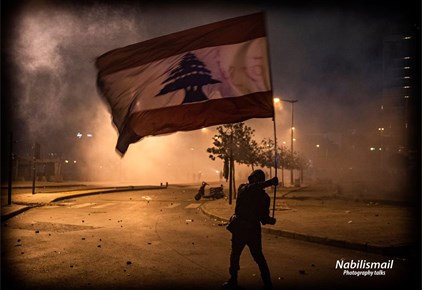 * Researcher on Israeli affairs
Since the start of the popular protest movement in Lebanon last October, Israel has been closely following the developments of the Lebanese internal situation, based on two fundamental assumptions that have emerged in most analysis: the first is that Israel has no interest in interfering in what is happening in Lebanon; the second is that even if Israel wanted to intervene, it only has the ability to influence indirectly.
In particular, Israeli attention focused on monitoring the extent of the popular protests affecting the position of Hezbollah inside Lebanon, and its implications on the prospect of a military escalation on the Lebanese-Israeli border, at a time when all estimates in Israel consider “Hezbollah” as its greatest threat on the northern front. Israel’s interest in exploiting in its favor the sharp economic and financial crisis that Lebanon is going through has also emerged.
In many Israeli opinions, the persistence of the protest movement in Lebanon and the deterioration of the Lebanese financial, economic and social situation will have a negative impact on Hezbollah. Dr. Dan Schueftan, head of the National Security Studies Center at Haifa University, considered that “the public in Lebanon understands the relationship between the sanctions imposed on Hezbollah and Iran, and the economic deteriorating situation in Lebanon. The persistence of the protests will have a negative impact on Hezbollah.” However, he does not expect these protests to succeed in bringing about real political change in Lebanon that could trouble the current balance of power. In his view, the Hezbollah will remain “present for many years, and the protests will emerge and disappear from time to time.” Schueftan assumes that the party’s preoccupation with the Lebanese internal situation would avoid it from entering in a military confrontation with Israel, but that does not necessarily rule out any unforeseen event that could change the situation and lead to a sudden deterioration on the northern front.
The conclusion that the Israeli experts agree on is that Lebanon entered a stage of political instability. According to Udi Evental, researcher at the Herzliya Center for Strategic Studies: “It seems that Lebanon entered a stage of instability, in light of the political elite’s insistence not to cede power, and its inability at the same time to govern effectively through the current political system, and the complex reality In Lebanon.” He believed that the political change in Lebanon and the demand to change the prevailing system “may have positive repercussions on Israel, including increasing criticism against the survival of Hezbollah’s military capabilities outside the authority of the state and its institutions, and thus impose further restrictions.”
After assigning Hassan Diab to form the new Lebanese government, the prevailing opinion in Israel was that the new government is the Hezbollah-government. One of its major challenges will be to persuade Western countries, led by the United States and the Gulf States considered to be among the countries that can help Lebanon out of its economic crisis by providing funds, because in their opinion, this will serve the interests of Hezbollah.
In light of this new reality, researcher Orna Mizrahi, a senior research fellow at the Institute for National Security Studies asked in an article published on 6/2/2020 on the Institute website: “The rise of Hezbollah’s influence in Lebanon and its control over the new government puts Israel in front of a dilemma: is there a complete identification between the Lebanese government and Hezbollah?” She added, “this is a very important issue not only towards Israel’s position on international assistance to Lebanon and international contacts with the new government, but also in the event of a military confrontation with Hezbollah.”
Israel’s exploitation of Lebanon’s economic crisis
It is true that Israel does not have the means to interfere directly in Lebanon, but the severe financial and economic crisis afflicting this country presents an opportunity to intervene indirectly by exerting pressure on international bodies to impose conditions on Lebanon in order to provide the financial assistance it needs. According to Tomer Fadlon, Sasson Hadad and Elisheva Simon of the Institute for National Security Studies, in an article they published on January 16, 2020, “Lebanon’s urgent need for external assistance represents an opportunity for Israel to put conditions on the provision of assistance, such as stopping Hezbollah’s armament and restricting its access to public funds.”
Moreover, Israel perceives the economic crisis in Lebanon as an opportunity to push Lebanon to accept American mediation to resolve their dispute over the demarcation of the borders of the exclusive economic zone, especially in Block 9, which will facilitate the exploration of gas and oil that can generate much needed revenues for Lebanon.
Another issue that arose after the publication of US President Donald Trump’s plan to resolve the Palestinian-Israeli conflict, in which it gave Lebanon an estimated 6 billion $ and a half for its help in absorbing Palestinian refugees who would not be able to return to their lands or to the future Palestinian state. Of course, Israel does not attach great hopes to Lebanon accepting the plan, knowing that the President of the Lebanese Republic hastened to formally reject. But Israel believes that publishing the plan will force Lebanon to take it seriously in one way or another, because this will open up means of dialogue with the American administration that is still waiting for the new Lebanese government views, in order to decide whether it will help it or not.

Israel perceives the economic crisis in Lebanon as an opportunity to push Lebanon to accept American mediation to resolve their dispute over the demarcation of the borders of the exclusive economic zone, especially in Block 9, which will facilitate the exploration of gas and oil that can generate much needed revenue for Lebanon.