I Will Never Sell My Father’s Shop 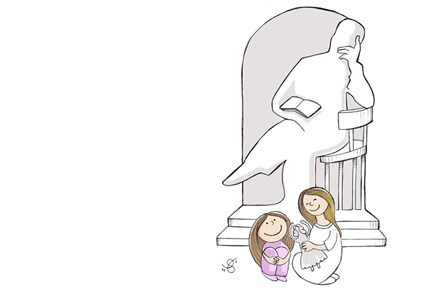 After a long career in education of over 40 years, my father did not wish to stay at home and stare at the TV. Neither did he want to spend his day memorizing the faces of news anchors and following weather forecasts. So, he decided to open up a small shop selling toys and household items near Burj al-Barajneh camp in Dahieh, a suburb south of Beirut.

The shop was on the corner of Al-Burj Street separating (or joining) the Palestinian refugee camp and the Lebanese Al-Burj area. My brother and I would hear all day long constant shifts between accents and we would try as kids to imitate them when we had customers. But often we would mix up Palestinian and Lebanese expressions in wishing good fortune and use them in the wrong context, such as the Lebanese to’borni and the Palestinian allah yisiidak. And many times, when trying to say something sweet to handsome little boys, I had mixed up Lebanese and Palestinian expressions.

My father’s shop was the first of its kind in the area and was almost a shrine for all the women of Al-Burj and the camp. My father called it the Dollar Store, as was the new market trend at the time. My father would bring the goods from the Basta al-Tahta area in Beirut. The owners of Burj al-Barajneh camp shops would buy merchandise in bulk from him. The small shop was busy with merchants, women and children, and us.
Even though my brothers and I tried to help, we were “blinding her instead of applying kohl to her eyes,” as my father used to say, meaning that our intentions to do good would backfire. My mother was a conservative Palestinian village girl. Her words were always more impactful. She would say Palestinian village proverbs to us, such as “there are those who build castles and those who dig graves.” I never understood my mother’s words. We were only children, trying new toys in the shop and enjoying them before they were bought. And we tried to spend the take of the day on ice cream and candy from the shop across the street. But the best time at my father’s shop was when children our age came to buy toys and share new songs or moves.
Reem was the one who taught me the nursery rhyme Fattahi ya warda, dummi ya warda (Open flower, close flower). I remember Reem well. Her father would bring her by when she would do well at school to reward her with a gift of her choice. I used to envy her because her father bought her toys that she liked, and she envied me because my father owned a toy shop …
Reem would sit next to me on the steps in front of the shop to try her new toy while our parents chatted. She would sing songs from her school to me. Once, she asked me to clap her hand as she sang: “I am Sindbad, I am from Baghdad, my uncle is Aladdin, he got me a religion textbook, from Palestine, Palestine is our country and the Jews are our dogs, they came to our country like beggars … Gars, gars, gars…”
I was transfixed as she sang with absolute energy. I do not know why I was surprised by her singing that day. I was hearing for the first time a declaration of true love for Palestine from a girl who said to’borni and not allah yisiidak. Could it be that accents got mixed up in my head again? I rushed to my father to tell him about Reem’s song, and he smiled and said: “What did you think? All human beings are born to love.”
My father that day was the first person to define love for me.
My mysterious father, whom I never knew anything about except what I heard from his PFLP comrades about his heroism and his training in Gamal Abdel Nasser camps in Egypt when I found his old passport full of United Arab Republic stamps. My father was a man of few words. One December/January morning, I saw him remove the dollar store sign and put up one in Arabic reading. “Everything for a Lebanese pound.” He did not tell me why he suddenly changed the name, just as he never told me why he did not respond to the invitations of parties and honoring ceremonies.
Twenty years have passed and the market has changed. I started seeing “Beijing” in all Al-Burj markets and no longer saw a single customer in my father’s shop.
Consumption patterns changed and my father’s hair color changed, but the shop name did not change.
The moment my father said that we’re selling the shop, I realized that day had come and it was inevitable. I knew at the time that our postponed secret could no longer be postponed.
I know …I know, my father, that the shop has not been making money for a long time, and that you hide every day a fat book with the bag of fruit and only need two days to finish it, and that customers no longer come into the shop and that it is your escape from life to the fictional world of novels, and from old people meetings and doctor appointments. I know you sit there all day to avoid someone asking you about the reason for our losses in the war and the fate of the missing who fought alongside you. So that your grandchildren would not ask you about the meaning of justice or homeland.
Where will you play out your imagination now? Did you give it up my father? Where are you going to hide from medicine packs now? Where will you hide from your daughter’s hope for love?
P.S.: My father will not read this article, and I will not sell the shop, so life’s justice is intact.
Previous post
Next post