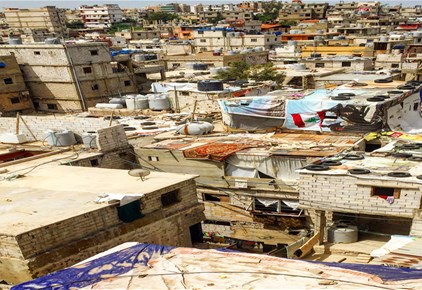 Around 70 years ago, it was called the Shatila Sands or Shatila Yard. The first refugees put up their tents on the sand before turning into an official camp under UNRWA in 1959.

On this sand there were people from Jalil villages, such as Majd Al Krum, Bi’ina, Sha’ab, Safsaf, Nahf, Dayr al-Qassi, Al-Birwa, Yajur, and others. Gradually, the population increased and reached around 12,000, besides the militants and members of Palestinian political organizations that arose after the Battle of Karameh in 1968. Shatila Camp became a ‘Mini Palestine’.

Like all other Palestinian places, this place teaches a refugee how to uphold family ties, retain the accent of their parents, understand the human non-tangible heritage, and not let inherited family divisions die.

A refugee must travel daily in his mind to his homeland to shape his identity in exile. Such identity is incomplete and branded with fire because the existing home – Lebanon – isolates and rejects him, while his true home is far and keeps getting farther.

Further, it was at the same time a space hosting dreams of the right to return. The camp was a temporary home, a stop on the way back. Today, it is a place of true exile, just a rest area on the airport road or a shelter for cheap labor.

Shatila camp’s scope expanded towards the southern suburbs, near Burj El Barajneh camp and other neighborhoods inhabited by Palestinians since 1948, such El Ruwais and Ghobeiry.

It also expanded towards the heart of Beirut, where Mar Elias camp is, in addition to being directly adjacent to the Sabra neighborhood, before the two were joined, now forever to share the same fate.

There is also Farahat neighborhood, Hamad Road, and Tariq El Jdideh. However, the camp’s scope is very narrow due to rapid demographic changes that altered its shape in the fifteen years between the end of the camp wars in 1988 and the beginning of the second uprising’s decline before President Yasser Arafat was assassinated in 2004. Since then, hope has been diminishing, and the people have been leaving.

Shatila Camp lost its uniqueness and would have now weathered away if it wasn’t for its old foundations that stood fast around the mosque the graves of the camp’s martyrs (other than the cemetery of the martyrs of Sabra and Shatila massacre), the resting place of Ali Abu Touq, and around the original alleys and their old inhabitants and the remaining houses.

For over forty-five years, Palestinian youth have been migrating, especially those from Shatila, Burj El Barajneh, Tel El-Zaatar, and Dbayeh.

After the 1982 war and the departure of Palestinian forces from Lebanon, those migrating increased.  Meanwhile, due to the hardships that befell the camp (Lebanese civil war, 1982 war, Sabra and Shatila massacre, and the camps war), camp residents left their houses for the nearby neighborhoods, such as Tariq El-Jdideh. They rented their homes to migrating working labor, including Syrians, Egyptians, Indians, Bengalis, and others.

Before that, when things were better for a Palestinian resident of this camp – especially if they were working in a Gulf country – they would buy their parents a house in the nearby neighborhoods and rent their house in the camp.

Gradually, the camp lost its residents, and residents lost their camp, in which they have taken shelter for long – for over twenty-five years after the Nakba.

Official Lebanese policies prevented the camp from integrating with its urban surroundings, even at the municipal level.

The victim’s widespread narrative among the Palestinians made them look like ethnic people viewed as suspicious by many Lebanese.

Although the Palestinians repeatedly said that they would not forget what happened to them, they forgave all those who wronged them and apologized to all those they wronged.

However, Lebanon’s evolution overlooked them. And if such development were negative, they would suffer in many ways; and if they were positive, they would not benefit from them.

At the peak of rebuilding Lebanon and the height of the inflow of money during the term of President Rafiq El Hariri, Palestinians received two shocks: They were prevented from owning property, and exit/entry visas were applied to them. Despite the second having been cancelled, the first is still in effect.

Like other Palestinians in Lebanon, Palestinians in Shatila Camp today are no longer preoccupied with Lebanese politics unless in the areas that directly touch their daily lives.

Like all people, they only mind their own narrow affairs now, after being pulled into the Lebanese political life with all its parties and problems.

All talks of weapons, nationalization, and civil rights, such as the right to work, own, and establish unions, have vanished in light of the hardships Lebanon is now living, such hardships that are taking down Lebanon itself.

Can the Lebanese state today be expected to meet any Palestinian demands?

Palestinians should get used to taking care of their problems at this stage. They have a vital duty toward the Lebanese community, which is to fight against sectarianism in the camps, not to undermine the Lebanese national security by firing missiles from South Lebanon – missiles which are without political or military value – that perhaps serve the interests of regional powers that do not all care about the fate of the Lebanese or the Palestinians.

Marginalizing the Palestinians in Lebanon and the estrangement they experienced in this country – Shatila camp stands as a faithful witness to that – led to the Palestinians turning their backs on the Lebanese community – except for the old groups and new activists – and looking eagerly for ways out of their estrangement and marginalization.

Such is the troubled life of Palestinians in Lebanon, and it sometimes takes contradicting forms. Youth, media, communication, art, and sports groups are being formed and growing within this context. The motive behind this is to stand against estrangement by developing a Palestinian identity capable of survival and continuation in a troubled world such as the Lebanese community.

The painful paradox is that once an activist gets a chance to immigrate, they leave at once. Hence, the camp in Lebanon lacks steadfast individuals, although the Palestinians in Lebanon used to be pioneers in many fields over the decades after the Nakba.