Lebanese and Palestinians allies by pain and hope 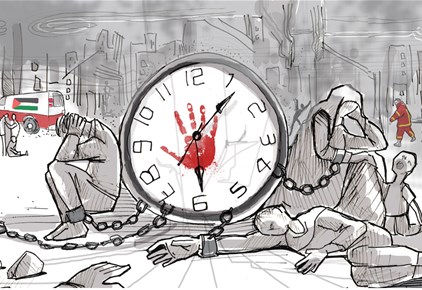 *Chairman of LPDC
The Lebanese people are living one of the worst periods in their history. They have never had to face such a plethora of difficulties and bad situations, at all levels and in all fields. For this disastrous time, they hold responsible the political class and the system, which led the people and the country to this catastrophic decline.
When the time comes to rise again, the Lebanese people would have presumably learned from these bitter experiences and got rid of many practices that were inculcated in their mindset and their outlook, and which were due to a particular sectarian system, the very origin of these disasters. So far, that was never witnessed in Lebanon’s modern history, despite the many calamities and disasters that the Lebanese had to go through every now and then. Every time, the people of Lebanon repeated the same mistakes that they have made before and slid back down in the labyrinth of the same dark tunnel. And every time, the outcome was precious prices paid to the disadvantage of their independence, daily living, freedom, economy, peace, and the advancement of their homeland.
For the Palestinians, the situation is even worse. Besides the fact that since they became refugees in Lebanon, their living conditions lack the basics for a dignified human life, they are deprived of a homeland, an identity, a state entity, and societal institutions. Moreover, their places of refuge, especially in Lebanon, which has a particular sectarian structure, have deprived them of the right to live a decent living. For more than seventy years, they have suffered from social and economic conditions.. They put up with their situation in the hope that one day they will return home. However, this right, the right of return, faces major challenges today, most notably “the Deal of the Century” challenge which was preceded by several policies aiming to put an end to the cause, and which would be followed by projects to annex parts of the West Bank and the Jordan River Valley. On top of that, the Arab countries’ position has collapsed, the Palestinians are still divided, and the international standing is fragile and weak. That is not all for the Palestinian people, displaced in the diaspora countries, or struggling against settler colonialism. They have yet to deal with the COVID-19 pandemic and the deterioration of Lebanon’s economic situation, all of which have made their life even more miserable.
The Lebanese people are called upon today to reflect on their previous experiences, which led them to this situation, learn and build upon these lessons, and set new foundations for a citizen state that will secure their interests and preserve the homeland of their dream. A homeland truly free, independent and democratic, in which citizens are equal in rights and duties. A homeland that achieves progress and prosperity for its society through interaction with its Arab surroundings and with humanity worldwide. A homeland in which the Lebanese people could reaffirm their commitment to the values of modernity, progress and solidarity, and as they aspire to, would  be a place for creativity, diversity, prosperity, justice and human rights.
Palestinians are invited as well to assess their experiences which cost them lots of precious blood, to reflect on the outcome of their leading cause, and to formulate internal and external policies that could prevent the loss of the remainder of their country and force the occupation to leave and recognize their right to freedom and independence.
If the Lebanese and the Palestinians fail to do so to face these urgent challenges and tasks which cannot be delayed or postponed, they will have to endure the same tragedies again and incur additional losses.
Previous post
Next post