Lebanon unified against settlement supports our right to return 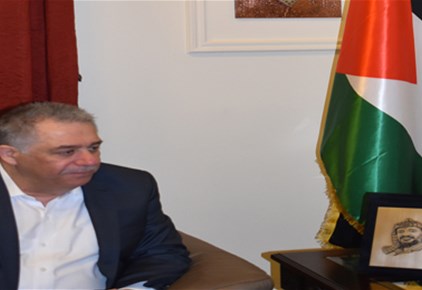 In an interview of “Jousour” with the Palestinian ambassador to Lebanon Ashraf Dabbour several themes were tackled, most notably the unified Palestinian demands from the current government, the living conditions of Palestinian refugees, and finally the Palestinian official position in light of on the financial economic crisis in Lebanon.

What do all Palestinians, regardless of their affiliations, want from the Lebanese state and the new government?

Frankly, we want the government to proceed with the Palestinian humanitarian file in depth. The current difficult living situation that Lebanon is witnessing in general has severe repercussions on Palestinian refugees in camps and gatherings. Moreover, the failure to open the labor market to the Palestinians makes their lives more miserable and difficult. Had it not been for the assistance provided by the Palestine Liberation Organization and international organizations, the situation would have been even more catastrophic. The jobs provided by UNRWA reduce the burden to some extent, but our Lebanese brothers must seriously tackle issuing decrees that allow the Palestinians the right to work in the same way as other foreigners residing in Lebanon.
We have presented a legal paper on the right to work to the Lebanese authorities, and the LPDC in order to raise it to the relevant authorities, and we are following this matter closely. The paper does not affect the basic Lebanese laws after amending Laws No. 128 and 129 and removing the principle of reciprocity in dealing with the Palestinian. All Lebanese parties know our demands. We do not ask for anything from Lebanon except for the Palestinian refugees to live decently. A Palestinian, who is committed to preserving security and stability in Lebanon and the camps, as stated by most Lebanese authorities, only asks for the adoption of the necessary procedures. The laws are in place, allowing him to work in order to be self-supporting until he returns to his homeland. We demand the respect of international humanitarian law, which stipulates that the country-hosting refugees has to provide him with a decent life. We are not asking for assistance, but rather the right of the Palestinian to work, so he can eat bread by the sweat of his brow.
However, I am surprised, and disappointed from the voices of fear of letting the Palestinian work, and I find no convincing reason for it. Especially since the Palestinian and Lebanese positions are united in rejecting settlement. We appreciate the stance of Lebanon and the Lebanese towards the right of the Palestinian refugee to return. This gives strength to the Palestinian position in international forums and strengthens our position to demand our rights. Consequently, we stand against any settlement plan. With our love and appreciation for Lebanon and our thanks for its hospitality, we reject settlement and do not give up our right to return to our homeland. We reject settlement not only because Lebanon does not want it, but because we have a right to our land. The settlement argument must be withdrawn from any discussion. We are also convinced of our ability to confront any project that compromises our rights. When Lebanon stands united against settlement, it supports us, as Palestinians, against any project that targets our existence.

Can the Lebanese state, with its known situations, achieve what the Palestinians demand?

We are well aware that the situation in Lebanon is difficult, but we are not asking for the impossible. We demand decrees and decisions that allow the Palestinians to work, in order to secure their livelihoods. It is true that the situation is difficult today, but it may improve tomorrow. Moreover, the Palestinian can contribute to the rise of Lebanon from its repression through the existing labor force capacity and transactions from “Palestinian migrants as well as foreign currencies flow through the UN organizations, NGOs and PLO factions.

The so-called the Deal of the Century is a major topic now. How would you describe it?

The so-called “Deal of the Century” or the American plan is clear, and it paved several steps to announce it, starting with transferring the American embassy to Jerusalem, cutting funding on UNRWA and trying to cancel the extension of its mandate, ending the refugee issue, redefining the legal status of Palestinian refugee… and Manama workshop, etc. in addition to numerous stances and measures.
But we must diagnose reality as it is. The offer is not a deal, because a deal is usually takes place between two parties. This deal is unilaterally, and it is a continuation of an old newly modified project whose seriousness is that it aims to seize the entire land of Palestine, shirking all the international resolutions that protect the Palestinians’ rights to their land and state. In short, it is a great conspiracy targeting Palestine, and striking the project of establishing a Palestinian state on our land. However, not everything that is written for a people becomes an inescapable destiny. We did not and will not give in to what was offered, and history will write out the steadfastness of our people, no matter how sacrifices are high. Accordingly, the deal is rejected, and our decision is not to submit to anyone who tries to promote it.

How can you confront the Deal without Palestinian national unity?
What is clear to us is that we can only confront the deal once we are unified. Everybody unites behind the position of President Mahmoud Abbas. There is continuous communication between all Palestinian factions since the “Deal” announcement.
On the Lebanese level, meetings and contacts exist between all factions to form a joint leadership to coordinate positions and work to organize movements to communicate our voice to all Arab and international circles.
Is announcing the deal sufficient to end the Palestinian division?
The Palestinian people are not disillusioned, and the proof is their popular resistance and on all international forms. There is currently an explicit agreement that we will face the deal with a unified stance, and there is serious understanding to end the division and we hope that we will reach this goal.
The situation is dangerous because the ultimate goal is to end the Palestinian cause. The Palestinian people are aware of their responsibility to protect their cause from risks; no project against the Palestinians can pass, as long as they are capable and determined to stand for their rights and are confident in their willpower.
We all know that no one would have dared to propose a project like the Deal of the Century had it not been for the weakness and the Arab division, which brought us to witnessing today numerous plans that threaten our existence. However, today everyone stands behind the Palestinian leadership and supports its positions and we are betting on our Palestinian people with all its categories and affiliations.
Currently, we are working on organizing events that express the Palestinian refusal in the diaspora of any projects diminishing us from our right. The movements that the Palestinian camps in Lebanon witnessed rejecting this deal are a message that confirms the firmness of our position. These protests are ongoing, and we are studying every move carefully. Any movement of ours will be driven through preserving the security and safety of Lebanon, our host country. Yet, internally, as it takes the form of direct confrontation with the occupation.

Some believe that Lebanon can no longer tolerate the Palestinian presence.

It is quite prejudicial for the Palestinian to say that the country cannot tolerate its presence. We were forcibly displaced from our country, never came intentionally, and there is a conspiracy against Palestine and the Arab nation, and Lebanon is at the core of this issue. We want to return, and the Arab nations must bear and support us because we are part of it. Lebanon and Palestine are one people, and there are intermarriages, strong relations and a united culture. Before the Israeli occupation, relations were daily and at various levels. After that, the Palestinians contributed to the progress and prosperity of Lebanon at various levels. Therefore, I do not see that we are a burden on Lebanon, nor any justification for depriving the Palestinian of his right to a decent life. There are those who come to us and emphasize on the settlement issue only to stir fear and raise concern.
It is only normal that we work to secure our lives through our capacities and skills and be self-sufficient. Moreover, there is consensus to compliment the Palestinian position during all the crises that have passed in Lebanon in the past few years. The Palestinian was and will remain a key factor for stability and security in Lebanon,
This is our unified Palestinian position in contributing to preserving security and stability and participate in Lebanon’s revival. A stronger, prosperous and healthy Lebanon will positively reflect on our camps. Likewise, any problem facing Lebanon will have negative repercussions, sometimes with a double effect on our people.
Today, Lebanon stands united with the Palestinian cause and with the Palestinian people and supports their rights to live in dignity until they return to their homeland and insists on building normal and sound dialogue relations together.
In this regard, we call for activating the role and tasks of the Lebanese-Palestinian Dialogue Committee and supporting it through recognizing the “Unified Lebanese Vision for the Palestinian Refugees Affairs in Lebanon” document. We hope that LPDC will have an impact on policies and decisions, and that its role will go beyond advisory capacity but shaping the Lebanese government’s policies regarding Palestinian refugee issues in Lebanon.
Previous post
Next post