Life in the Camps: On a hot plate – socially and economically 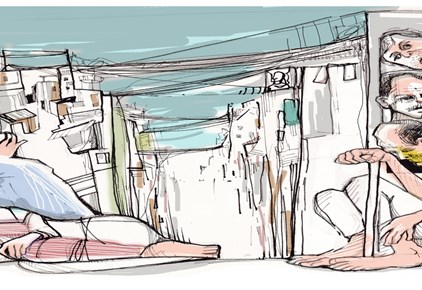 It was not easy to write this article during the day due to the extreme heat and the lack of electricity. It was also not easy writing it at night, as electricity is still out, and darkness engulfs my home in Beirut.

We aim to highlight the living conditions in the Palestinian refugee camps in Lebanon. Still, it’s unfair to separate the Palestinians, the Lebanese, and other nationalities, as the country’s current state is exerting a dire impact on all who live in Lebanon, with no exceptions.

Currently, there is no electricity in the camps. This, too, is the case in Beirut, Saida, Tripoli, and Tyre. Electricity subscription fees have rocketed to such an unaffordable level that many families choose darkness over light. While those who can afford to pay – whether Palestinian or Syrian refugees or indeed Lebanese citizens who live in the camps – are compelled to hand over as much as LBP 1 million to get just 5 amperes, with a maximum operating time of just ten hours, if they’re lucky.

Additionally, a national water crisis has recently been added to the list of multiple challenges to be faced.

An UNRWA circular dated August 27th 2021, stated that “there is a decisive crisis in securing diesel to operate water wells in the camps”. It called for “austerity in consumption, and operating pumps with whatever government electricity is available”.

This water crisis was also highlighted by UNICEF in a report titled ‘Drying Up: Lebanon’s water supply system on the verge of collapse’. It indicated that its total failure would prevent drinking water from reaching over four million people in the country.

Everything is falling apart

It may be an exaggeration to talk of a security crisis within the camps. Still, recently some camps woke up to a previously unheard-of series of thefts that hit cars in alleyways and on main roads, as well as motorcycles from the camps.

Although the Lebanese security forces managed to arrest the multi-national groups of perpetrators, the burglaries continued due to the ongoing impossibility of the marginalized – including refugees – to obtain a decent income, enough to feed their families.

Abu Emad Shatila, Secretary of the Public Committees in Beirut, explains to ‘Jousour’ how “poverty could lead to immeasurable problems” and that camps now “are on a hot plate in terms of social and economic issues, as well as regarding living conditions.

Abdulkareem Mustafa, a video reporter from Beddawi camp, believes “the economic situation in Beddawi is terrible” and “the harsh economic conditions in our camp have led to a doubling in the cases of theft, and an increased rate of violence”.

Issues within the camps are many, and there are several reasons for their existence.

Some are due to the fuel crisis and attempts to secure fuel and an entry to the black-market game that has become a source of livelihood for hundreds or thousands of people in Lebanon, including many refugees in the camps.

The view of Beddawi camp summarized here applies to the rest of Lebanon’s camps, even if in other forms.

A young man burned down his house in Mar Elias camp in protest of his poor economic conditions – he could not find milk for his baby girl. Although damage was not severe and the fire was put out quickly by the Lebanese and Palestinian Civil Defense, such an incident should serve as a warning for what could happen in all camps.

Voices, however loud, are not being heard – except by Palestinian factions who did not propose an emergency plan so far. Instead, they asked UNRWA to develop a plan to secure the needs of Palestinian refugees in Lebanon.

For their part, UNRWA only came up with a subsidy program of US$40 for those below 18 years of age and announced this in a statement issued on July 17th. Despite the community’s reservations, backed up by factions’ dissatisfaction, UNRWA issued the implementation and distribution mechanism on September 1st.

Um Rabee, in her mid-70s, is a resident of Mar Elias. She believes conditions in the camp are not better than elsewhere. The woman, who lives off her martyred husband’s US$ salary, says: “I get paid this small amount in dollars and can barely afford my living expenses due to prices getting higher very quickly. God help those who get paid in Lebanese Lira. I fear houses are hiding many secrets, such as children who might not have had any meals”.

While Um Rabee was pointing to her neighbors’ houses, a woman was yelling at her son for asking her for just 1,000 Liras (around 5 cents at current black-market rates) to buy things to eat from the shop. “She didn’t use to yell at her kids like this, but now her husband’s salary no longer covers their rent and the electricity subscription”, Um Rabee said.

Children in the camp confirmed that nothing could be bought for a thousand Liras. They are the biggest victims of this crisis – their educational fate is unknown, and the candies that made them a little happy are now too expensive for parents to afford.

Officials are waiting and trying

Officials at the camp hold UNRWA responsible for the default. In private conversations, some Palestinian leaders say that Palestinian factions cannot undertake an active and influential role under such grinding conditions the Palestinian people are going through.

Such opinion is not shared in public nor the factions’ meetings. Furthermore, after they formed a crisis management committee, they could not hold meetings to develop viable solutions. On a positive note, some members were able to secure diesel after UNRWA said it could not operate the water wells in the camps due to the lack of fuel.

Abu Emad Shatila, Secretary of the Public Committees in Beirut, believes that the current crisis is too oppressive and that families at the camps cannot support themselves for months. “Around 80% of the families need direct food aid, especially because Palestinians do not have civil rights, and hence their suffering is multiplied since they did not have any savings that would help secure their living.”

Abu Samer Al Ashqar, a member of the Public Committee of Burj Barajneh Camp and the camps’ labor committees, is not more optimistic than Abu Emad. He told ‘Jousour’ that “unemployment is noticeably higher in the camps as many companies and establishments closed their doors, and salaries are not sufficient anymore. But a category of Palestinians can adapt to today’s conditions better due to their salaries being in US$, such as pensioners from some factions and UNRWA staff”.

Abu Samer warns that “this crisis is pushing the educated Palestinian youth, including doctors, engineers and lawyers, to leave Lebanon”.

As far as the solutions, he believes that “since the Lebanese state is working on securing a subsidy card for the Lebanese, we should pressure UNRWA to provide the same, or bring back the Registration Card to reduce burdens on Palestinian refugees”.

It seems there is consensus that UNRWA is not doing enough and needs to do something that can be effective for the lives of refugees. But there’s no one to pressure UNRWA, an organization established for the relief and works of Palestinian refugees, and so things continue to remain the same.