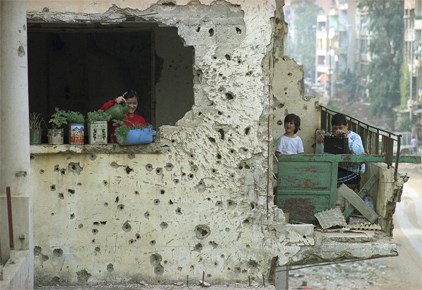 The history of tragedies and hatred still sits at the top of our memories, Lebanese and Palestinian alike. It overshadows our objective and sound reading of the past with its events, as well as our day-to-day lives and how to address its problems and issues.

Almost 30 years after the end of the Civil War, and more than 70 years after the Palestinians sought refuge in Lebanon, openness and reconciliation between the Lebanese and the Palestinians has yet to occur. These are essential conditions for the restoration of normalcy between the two sides. The Lebanese are still apprehensive of the Palestinians: They harbor a fear of arms, of the number of refugees, of property ownership, of Palestinian employment… In short, they fear all that is Palestinian. These fears fall under one overarching heading: the fear of permanent settlement, or tawteen.
On the other hand, the Palestinians are increasingly resentful towards the Lebanese State, especially the younger generation, who were not yet born during the Civil War. Clearly they bear no responsibility for what happened during that period, nonetheless, they are paying dearly for it. They find themselves today unemployed, with no means of adequate livelihood, no decent housing or living conditions, living a life steeped in suffering and misery, with no chance to achieve stability, raise a family or live a decent life. Because they cannot meet their basic needs, they have no prospects and they fall victim to social ills in all their forms, especially substance abuse, extremism, and corruption of all kinds.
Through no fault of their own, Lebanese youth just like the Palestinians, inherited a heavy legacy and a history they did not have a hand in shaping. The Civil War has poisoned Lebanese-Palestinian relations, and produced a negative stereotypical image of Palestinians among the Lebanese and vice versa.
It is time for young people to dispel these stereotypes and to create a bright reality that bears the markings of their ambitions and their drive to reject despair and to raise the banner of progress.
It is time for all of us to engage in openness and reconciliation, as well as time to detach the Lebanese concerns about permanent settlement from the Palestinian need to obtain the basics of decent life in their host country.
In this regard, we have to reaffirm two things:
Firstly, despite the fact that it has been 70 years since the Palestinian exile to Lebanon, and despite all the events and horrors experienced during the Palestinian presence, permanent settlement has not happened, even during the most difficult circumstances. The Lebanese State and its people oppose permanent Palestinian settlement, while the Palestinians also reject it because they are attached to the right of return to their homes no matter how long they have to wait.
Secondly, the question of permanent settlement in Lebanon is an issue to be taken up in the context of the final resolution of the Palestinian issue through international decisions. It is now proposed by US President Donald Trump under the so-called Deal of the Century. It certainly won’t result from Palestinian refugees simply obtaining some of their human rights.
Therefore, let us proceed towards openness and reconciliation, and separate the fear of permanent settlement from the need to grant Palestinian refugees their human rights. Based on this openness and reconciliation, we can together face the impending dangers that threaten both Palestine and its cause and Lebanon as an independent state for its people.
Previous post
Next post