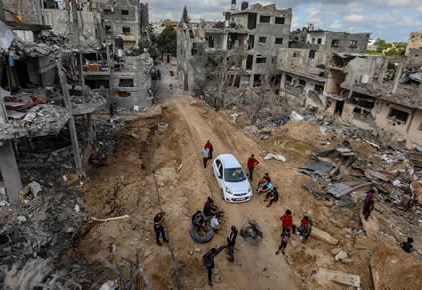 Osama Hamdan, a senior representative of Hamas in Lebanon and a member of the organization’s politburo

With Trump’s announcement on January 6, 2017, of the recognition of Jerusalem as the unified capital of the Zionist entity, and the transfer of the US embassy to it, he fired the coup de grace on the settlement path, and he unleashed the then Prime Minister of the Zionist entity, Benjamin Netanyahu, to launch a comprehensive Judaization process for the city of Jerusalem.

The attempts to Judaize the Holy City did not start with Netanyahu. The successive occupation governments worked on that, beginning with the announcement of its annexation to the Zionist entity in the eighties of the last century, passing through the construction of settlements in its vicinity and then expanding its borders to include the territories and whoever lived there, and the imposition of a series of laws that enable the occupation to expel the Palestinian Arab residents there, annul their identities, and build up a wall inside and isolate some Arab neighborhoods, and removing some of them from the city limits. However, the Netanyahu government has tended to work in two ways; the first targets the Arab neighborhoods inside the Holy City, which have resisted and defied Judaization until now. This effort was focused on the Sheikh Jarrah neighborhood, as it represents an extension that reaches deep into the city of Jerusalem towards the Moroccan district.

As for the second, it is encouraging operations to seize part of the Al-Aqsa Mosque, especially after the failure of attempts at temporal and spatial division due to the steadfastness and cohesion of the people of Jerusalem in the face of all these attempts. Last Ramadan 28 (corresponding to the anniversary of the occupation of Jerusalem in 1967 according to the Hebrew calendar) was set to carry out a major assault operation of Al-Aqsa Mosque.

Facing such events, and in light of the failure of the international community to respond to all Palestinian demands and calls to stop these attacks, the Palestinian resistance issued a clear warning to the occupation that “Jerusalem is a red line” and that violating Jerusalem means “transformations whose consequences cannot be determined.” As usual, the occupation did not care about that, but the enemy government assessed that the opportunity to implement these plans was favorable and that the parties to the normalization process that began years ago would be able to absorb the repercussions of this crime. This necessitated the announcement of the Qassam commander Muhammad Al-Deif, warning the occupation to stop its attacks or put up with the implications.

A specific operation and a new equation

The continual assault on Jerusalem necessitated the direct intervention of the resistance, which surprised the occupation. Instead of realizing the sensitivity of Jerusalem’s issue, the occupation decided to draw up a plan (South Winds), put into place by its Chief of Staff Kochavi, and simultaneously decided to suspend the largest maneuvers in the history of the occupation, launching a massive air attack on the Gaza Strip. In contrast, the resistance responded to this aggression by firing homemade missiles that targeted Ashkelon, Ashdod, Tel Aviv and Beersheba, and Jerusalem. The enemy was surprised by the resistance’s capabilities, the efficiency of its performance, and the integration of all its factions in the field, and this was one of the most important fruits of the (Joint Operation Room) of the resistance factions in Gaza, which produced an integrated resistance performance, making the operational accomplishment; unified the center of targeting for the enemy, without entering into rivalries or differences in the internal organizational environments of the factions adopted by the military wings of the resistance.

Nevertheless, the biggest surprise was the unprecedented popular zeal in the history of the Zionist entity, its intensity in the occupied territories of 1948, which the enemy thought that the identity of its people had been corrupted, and finding that the third generation born under occupation expresses Palestinian national affiliation in word and deed. The scene was concluded with a popular uprising in the West Bank. Thus the enemy found itself in front of a multi-form Palestinian resistance, in which the Palestinian people participated from the river to the sea.

The Palestinian achievement was represented in several headlines, the first of which is the realization of the importance of the unity of the political position in the face of the Zionist enemy, which must possess as many cards of power as it can, foremost among which is the resistance. This realization requires taking larger and deeper steps in this direction. Today, the most essential and prominent step appears to be rebuilding the Palestine Liberation Organization and restoring the basic national project of the Palestinian people (Liberation and Return).

The success of the resistance in building new equations in the confrontation represents the third of these achievements, and if the resistance in such a confrontation has established the equation of bombing whenever bombed, and targeting residential zones, added a new and vital equation represented in the exit of the resistance in Gaza from the circle of defense of Gaza and working on breaking its siege towards defending Jerusalem and the holy sites and benefit from the accumulation of power over the past fifteen years to confirm that its role is effective and operative in protecting Jerusalem as the capital of the Palestinian state and people, thus opening the doors of the liberation battle.

On the Arab and regional level, this battle surrounded normalization and put it along with its proponents in a real predicament. It also revealed the people’s will in the region, which maintains its basic positions in support of the Palestinian people and their resistance, just as the positions of support appeared on the official level for the Palestinian cause and the resistance. This requires an effort from all these parties to bring down the normalization project and support the Palestinian liberation project.

In sum, the battle of the “Sword of Jerusalem”, which was in order to defend Jerusalem, recorded progress in favor of the Palestinian people and their resistance in the face of the occupation and confirmed the possibility of defeating the occupation and the reality of this matter. And it remains, despite the pain and sacrifices of our people, an achievement and victory worthy of our people and their resistance, and the beginning of a new phase in the struggle with the Zionist entity, the pace and pattern of which will not be the same as before this battle.