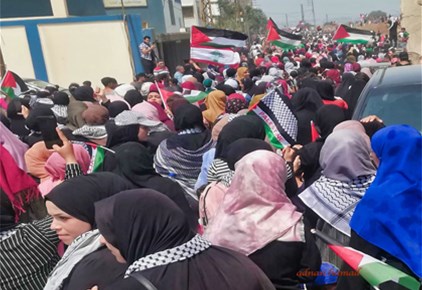 “Present! bear with us a little…
We are nothing but insufferable passersby!”
Mahmoud Darwish

The Palestinians refrained from participating in the Lebanese popular protests that started on October 17, in a political and popular position that was unanimous by all factions, forces and national actors, given that these movements are linked to the intern-Lebanese politics that is limited to the relationship of the Lebanese citizen with his state. Despite the Palestinian refugee’s suffering from the tyranny of the Lebanese laws, he was able to differentiate between political sense and political practice, and in this case between emotional solidarity and active participation.

Relative neutrality in popular support respecting Lebanese privacy and understanding the role of Palestinian privacy in promoting the positive environment and rooting the national spirit, made empathy towards the Lebanese citizens outcry a matter of logic, as they both suffer from the same injustice that doesn’t make a difference between nationalities nor confessions. Adopting a positive policy attitude in dealing with these protests, was not from a negative perspective, but rather as an aspiration for its success; because many are those lurking for its fail, Granting the ability of these protests, to manifest themselves and their identity without shame or suspicion and to express the people’s self-will without prior accusations, lies in the purpose of achieving the justified demands of the Lebanese people, because it has an interest for the Palestinian refugee population in Lebanon as well.

This comes in the context of the Palestinian policy adopted in Lebanon since the Taif Agreement, which considers the Palestinian presence in Lebanon to be coercive and temporary committed to the positive neutrality in which the Palestinians are not sidelining except for civil peace and stability; and when the danger lurks for everyone, they will not be bystanders on what threatens Lebanon, and will not stand with folded arms against any internal trouble that harms Lebanon, the identity and the Cause.
We have learned a lot from the joint Lebanese-Palestinian historical experience, given the situation in which particularity overlaps in a country governed by sectarian balances and not powers. This complex structure, with its hypersensitive frames, has negatively affected the Palestinian presence in Lebanon, which received its double share of political, social and economic injustices. Therefore, the Lebanese-Palestinian relations went in two directions:

First: The Palestinian rise, with a heightened sense of injustice, marginalization, and oppression before 1969, made the camps rise up against reality, not the other way around, even if there were internal and external interventions that had justified itself at the time and attributed it to the national duty, and to the joint endeavor to preserve dignity, identity and humanity. At that time, the Palestinian refugee symbolized the “fedayee”, who embodied the image of the dream of the homeland and the revolution in order to return to it. The transition through change from the “traditional and tribal political class” that prevailed in the camps at that time, to a new representative form that managed their daily affairs from the PLO and its popular and factional structures.

Second: The Lebanese national and patriotic forces of change, aspiring to make change, was reinforced by the presence of the Palestinians after 1969. Some Lebanese opposed this fact and did not forgive the Palestinians support towards the project of political reform of the Lebanese regime, which was led by the Lebanese National Movement at that time. The war is over and yet not really. The lesson remained the same in that every internal struggle for change and reform is to be led only by its local powers, otherwise it would result in disappointment for both parties.
Recalling the past here is a necessity for the sake of the present and drawing a policy for the future. In fact, there are those who have not yet moved away from the rhetoric of the past, in a country burdened by the consequences of wars and civil divisions, and where the rationale of accusing the “stranger” of being the origin and cause of the ruin is easier. As for the solution on grounds of “neither winner, nor loser”, it is but a model for the so-called logic of referral; and is in line with “the wars of others on our land” who are strangers or disrespectful guests! All of these are but a few examples recollecting the past, but whose shadows linger in our memories, adopting the form of psychological projection by running away from internal crises, or looking for a “scapegoat” in old notebooks.
We realize the magnitude of the pressures targeting the country in light of very clear divisions, which cannot be separated from current attempts to target the Palestinian Cause, as it is also a reflection of the Palestinian national crisis itself, which is also suffering from deepener-factional divisions. However, it rejected the temptation to indulge once again in Lebanese internal conflicts, or to be helpless pawns in sectarian conflicts. And this is something they did not do.
The Palestinian public outrage came upon the recent decision of the Lebanese Ministry of Labor in the resigned government, which is an example of a narrow-minded policy, because it affected the refugee’s safety, beside removing his refugee status.. For those who know or do not know, this was mentioned in the official text of the so-called “Deal of the Century” in a poisoned language about the situation of the Palestinian refugee in Lebanon and the procedures for closing the labor market in front of him! All of this raises the national need for a common denominator and a single strategy to drive back the dangers posed by permanent settlement and displacement, and to counter everything that weakens national immunity in facing challenges; and to emphasize the need to approve the “Unified  Lebanese Vision for the Palestinian Refugees Affairs in Lebanon” document.
Such a positive policy stems from a wisdom based on a rich experience reconciled with itself before others, and seeks to treat Palestinian rights in a way that does not ignite new strife in Lebanon, and where everything is not mixed up, the Palestinian is not seen as a scapegoat bearing responsibility for chaos, and disorder, and as a cause of current crisis, to be used as an excuse to deprive the Palestinians of their humanity, in a way that affects their existence and their right to return.
The relativity of this neutrality in the indirect implications with the Lebanese popular movements should be pointed out, but this does not make us overlook the impossibility of “strategic neutrality”, which accompanies the aggravation of economic crises as an illusion that there is an antidote and a magic solution to the crisis! This intended and ambiguous neutrality is an opposite neutrality, i.e. a disguised partiality, because it aims in the first place to exit the conflict, knowing that its starting points and dimensions are governed by objective conditions and not by a voluntary tendency, amidst this negative concept of rejected neutrality, because it is a call for a gradual pullout from the Palestine Cause and from Arab solidarity and thus allowing its violation.
Previous post
Next post