Palestinian youth choice: graduate into unemployment, or emigrate to work? 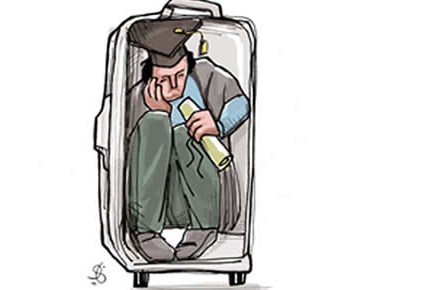 Palestinian youth choice: graduate into unemployment, or emigrate to work?

First-year nursing student Arwa, 20, has just turned twenty. Currently studying in Istanbul, far from her family and home in southern Lebanon’s Rashidieh refugee camp, a degree in medicine was her dream choice. “But”, she says, “I didn’t want to risk years of hard study and high fees and then be unable to work professionally” – Arwa knows that medicine is one of many careers that a Palestinian is forbidden to practice professionally.

Arwa is optimistic about her future as a nurse back in Lebanon; the current economic crisis in the country has led to a scarcity of nurses. Stifling financial pressure on the health sector and the decline in the value of salaries – paid in Lebanese pounds (and which have dropped in US$ terms by around 90% over the past eighteen months) – has prompted more than 1,000 nurses – university graduates with vast experience and high degrees of professionalism – to emigrate and work abroad.

Given the current environment in Lebanon, Arwa chose to study in Turkey. Partly through uncertainty regarding the dollar crisis and how this may impact university fees, and secondly because she wanted to increase the chance of finding work abroad if she doesn’t find a suitable opportunity in the country in which she was born and grew up.

Despite the fundamentally difficult conditions that Palestinians live in Lebanon, and the lack of decent livelihoods within Palestinian camps, for generations, her community has placed all their hopes on the education sector, praying for their children, no matter how high the sacrifice, to graduate with top degrees to provide greater chances for a better future.

However, recent events and the country’s alarming economic collapse appear to have delivered a fatal blow to the remaining opportunities available to many youths in Lebanon, particularly Palestinian youths.

Here is the crucial issue. Unemployment rates throughout Lebanon are very high, especially among Palestinian youth. According to the latest reports by the United Nations Relief and Works Agency for Palestine Refugees (UNRWA), 65% of refugees aged between 18-20 suffer from unemployment and lack of opportunities, and 70.3% of them say they will emigrate if given a chance.

Among host countries, only in Lebanon does UNRWA provide secondary level education to Palestinian students, enabling them to later enrol in universities. However, there are only between 1,300 and 1,500 students who finish high school, and most of them move to the Lebanese University, where they are likely to complete humanities studies. As for the academically gifted, they have the opportunity to enter private universities with preferential tuition fees, with some of them obtaining grants.

According to a recent study that looked at Palestinian university students in Lebanon – conducted by the Palestinian Institute for Human Rights – Witness (Shahed) – 66% of Palestinian students need financial help and cannot find anyone to cover their university education expenses. Moreover, 75% of those who applied for grants are pessimistic and consider that their request will not be met.

As for alternatives available to those who wish to continue their studies, 55% intend to join the Siblin College for Vocational and Technical Training, from where 15% say they will work in any profession until another opportunity becomes available, and 19% of whom wish to emigrate.

After excelling in high school, Omar Al-Sayed, a 25-year-old from Rashidieh camp, studied civil engineering at the Lebanese American University on a scholarship and graduated four years ago. Omar was unemployed for three of those years. Engineering is also one of the professions that a Palestinian is forbidden to practice outside of UNRWA or non-governmental organizations.

Omar says that he is among many unemployed engineers in Lebanon and that job opportunities grow fewer with each passing year. Omar has been practising his profession in Africa for a year now. He hoped to find a decent life alongside his family in Lebanon, but the country’s conditions prevented that.

Omar Tuhaibish, 21, and a civil engineering graduate from Siblin Institute, is currently unemployed. He says that he seeks to travel to one of the Gulf countries and work as an engineer there, but he faces difficulties in carrying out his college degree equivalence, as well as financial difficulties. When he tried to apply for the Student Fund – a fund that grants study loans to Palestinian students on the condition that the amount is refunded following graduation and upon work commencing – it was refused, since engineering students have high unemployment rates upon graduation. Therefore the possibility of repaying the loan was judged to be low.

Omar now spends most of his time in a coffee shop near his house with his friends in Ein El-Helweh camp. Most of those he spends his days with also graduated from universities, but they cannot secure jobs.

Students who enrolled in the same major often sought his help in their studies and, upon their graduation, many were able to emigrate and work abroad, but not all. One unable to find work was Mahmoud. Top of his class in the Faculty of Engineering, Mahmoud, now in his mid-thirties is still unemployed, and admits that his financial situation prevents even the possibility of marriage.

Omar reveals that Mahmoud has suffered from severe depression, which prompted him to become addicted to alcohol and drugs. Omar says, “Everyone who knows Mahmoud and is aware of his degree of intelligence knows what he would have been in a different situation, feels sorrow and fears for his fate when they see his condition now”.

Omar feels that the consequences of unemployment are not only represented in not finding a job but are also linked to other temptations that young people may resort to trying to solve this crisis when all other roads and opportunities are closed. He tries to put all his energy into volunteering and to occupy himself with any work, even if it is without any financial return.

A chemistry graduate searches online for a job

Esraa Tuhaibish, 22, is a chemistry graduate and holds a teaching certificate – she is unemployed. Esraa studied through a scholarship and received both degrees from the American University of Beirut.

Many months have passed since her graduation – all spent in search of work. She says that she cannot travel to work abroad before an entire year has passed since her graduation. One of the conditions for obtaining the education certificate grant is that she works for an entire year upon graduation in a school for the disadvantaged. Still, she faces many difficulties in finding a job. She says her Palestinian citizenship significantly limits the places where she is allowed to work and that the institutions she applied to did not take into account her certificates.

Esraa expresses her dismay at the extent of corruption and exploitation in educational systems on the pretext of thrift.

A computer science graduate works in a phone shop

Mahmoud Muhammad, 26, graduated with a degree in computer science from the Lebanese International University but is currently unemployed. He sometimes works in a phone shop owned by a friend in Ain al-Helweh, in return for meagre pay.

He could only record the minimum number of credits each semester to find time to work to pay for his tuition. Mahmoud had hoped that a university degree would open doors for him.

He is engaged to a young psychology graduate from the Lebanese University; his fiancé works for a social enterprise for which she receives just $30 per month. They want to travel, live, and work abroad, but they do not see a future for the family they want to establish.

Mahmoud says, “Marriage is now impossible because of the outrageous prices, very low pensions, and the economic collapse in the country. Whatever challenges the Lebanese youth may face due to corruption and the poor conditions of the country, for us Palestinian refugees, they are multiplied exponentially”.

A mechanic graduate from Siblin Institute opened a coffee kiosk

Obaidah Hebeish, 23, a mechanic and metalwork graduate from Siblin Institute, is also unemployed. Previously, he worked in a car workshop under the supervision of its owner, for which he was paid LBP25,000 per day.

With the economic inflation and the collapse of the Lebanese currency, he left his job, as it became pointless to continue to work for a salary that “does not even cover the price of a pack of cigarettes”. Recently he has opened a small coffee kiosk.

Obaidah sometimes thinks of joining one of the political factions in exchange for a few dollars but hesitates due to the undesirable obligations linked to such membership. He is fully convinced that his academic degree is of no use and finds that the educated and the uneducated have the same ultimate fate in Lebanon, which is unemployment. “If there is a hope worth holding on to, it is certainly not in Lebanon”.

In his fifties and a father of five children, Issam Hussein currently works in a small shawarma restaurant. His salary barely covers his family’s basic expenses.

After his graduation and following a period of unemployment, he accepted a job in Africa to secure an income for his family. Finding life away from his children too hard to bear, he returned after five years and then remained unemployed for a further year.

When his eldest daughter became old enough to enter university, the only option he was able to afford was at the Lebanese University – and within the narrow specializations available on its Saida campus – “I could not afford to pay for her transport to Beirut”.

As for his second daughter, who will soon be of university age, she felt compelled to reduce her ambitions because she did not want to be discouraged when she found that she could not achieve what she wanted. Instead, she intends to travel with her sister, stating that their mother supports “everything that will provide them with greater opportunities in life”.