Palestinians and Cinema in Lebanon… the Beidas-Boulos duo challenge 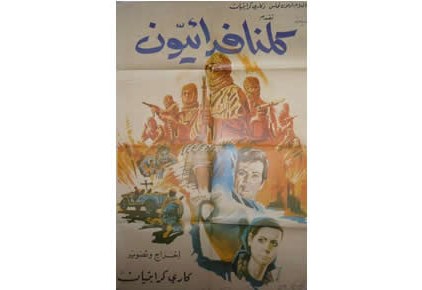 Palestinians had a significant impact on the film industry and film production in Lebanon. This lasted for around two decades and linked to two large displacements: the civilian displacement following the Nakba of 1948, and the military displacement as a result of the departure of the Palestinian leadership and its fighters from Jordan in 1970. The two events resulted in profound demographic and political changes in the Lebanese society, its demographic map, its political equation, and its economic nature.

The changes were the beginning and were rapid in their effect. The residents of southern Lebanon were affected by the closing of borders, a shift in commercial activity, the import of crops and goods and their export into Lebanon.

The economic relationship moved from the phase of exchange between two countries to adaptation in a local cycle that knew patterns of coexistence and integration at times and conflict at other times. This resulted in the consequences of poverty, prosperity, and devastation at the same time – all shared by the Lebanese and the Palestinians who live in friendship or hostility under the auspices of a state worried about its sectarian structure and constantly threatening the region’s wars, conflicts and fluctuating fates.

As the Palestinians were uprooted from their land and their homes and livelihoods were robbed, they found themselves scattered in camps with no identity and no hope other than the identity of the refugee and the hope of relief, surrounded by Lebanese who were no less poor, no less marginalized and living in equally deteriorating living conditions.

The Nakba, and its first displacement, resulted in a fusion between the deprivation of the people of the Palestinian camps and the deprivation of their new neighbors in the villages of the south, and their increasing migration to the suburbs of the capital and their residence in the belts of misery and the neighborhood of the Palestinian camps, overcrowded and expanding year after year in those suburbs.

Misery wasn’t the only outcome of the Nakba, nor were its victims deprived of a dignified life. The number of expatriates included wealthy people and their families who were more likely than the vast majority of their citizens to resume their lives, increase their wealth, obtain citizenship, and invest money and businesses in pushing the Lebanese economy to horizons beyond its borders.

To them are attributed the development of several facilities, for exampole: the banker Youssef Khalil Beidas from Jerusalem, founder of the Intra Bank, in 1951, and the star of his rise and tragic collapse, in 1966. The story of the Palestinian impact on cinema making in Lebanon originated from the biography of this man, and is linked to his establishing of the Baalbek Studio and was backed in implementing projects by his partner, another Palestinian, Badih Boulos.

There is no project that does not start from a dream.

Beidas chose Sin El Fil as the location for Baalbek Studio. From it, he overlooked the hills of Monteverde, and it seemed to him that they were the hills of Hollywood, plucked from the west coast of the United States, fertile for planting in this land of the eastern Mediterranean.

Fascinated by Lebanon’s boom in the 1950s and 1960s, equally fascinated by the frenzy of American and European producers and then by seeing their Egyptian counterparts transfer their money and expertise to Beirut to escape the nationalization of their sector under Gamal Abdel Nasser, the Beidas – Boulos duo found the opportunity to create a free cinematic capital in a region plagued by tyranny and coups.

Studio Baalbek was inaugurated in June 1962 and was under the management of Intra Bank. The bankruptcy of the bank did not stop it. Indeed, it benefited from the bank’s transformation into a joint stock company and continued burgeoning until the outbreak of the civil war in 1975. It continued to develop projects produced by Lebanese throughout the war years until it was completely emptied of its assets and was closed in 2010.

Whoever looks at the volume of cinematic work coming from abroad and the increase in co-production during the Egyptian emigration phase and the extent to which projects from Syria, Turkey, Iran and some of the Arab Maghreb have been attracted, will find that the Beidas – Boulos bet was meant to be. At the same time, this challenge did not bear fruit in establishing a sustainable national industry, as the recovery of Baalbek Studio was based on providing production services instead of investing in production and supporting Lebanese filmmakers in making their films and obtaining job opportunities.

Youssef Beidas died of cancer and depression two years after the collapse of Intra. He died in Switzerland and was buried in one of its cemeteries. His passing brought the curtain down on the first chapter of migration and quickly opened it up to chapter two of migration.

The first exodus was born out of despair caused by the 1948 Nakba, and the second was born out of the bitterness of the events of Black September and the exodus from Jordan in 1970.

However, it came with the hope of the Palestinian resistance armed with weapons and money from Arab countries. Lebanon is transforming a set of economic infrastructures for the Palestine Liberation Organization and all its affiliated and opposition factions. Under these structures, the Palestinian Cinema Institution was established and played the role of a government sector responsible for producing, showing and distributing films and investing human and material resources in their industry.

Palestinian organizations had several independent cinematic departments within their media structures, and not only did the Palestinians benefit from the support of these institutions but so did Lebanese filmmakers, and other Arabs supported the Palestinian cause and struggled in the ranks of its organizations.

However, unlike the integration of the first displacement into the Lebanese economy and the openness to a variety of cinemas popular in the markets, integration and openness seemed far from the concerns of the symbols of the second displacement, as money was political and those who spent it in art and culture did not care to invest it in a meaningful way.

They gave priority to the ‘cause’ and preferred propaganda to art, which created films that were closer to news reports than to art, and so this cinematic economy lost most of its impact and evaporated immediately after the great Palestinian exodus from Beirut, during the Israeli invasion  of summer 1982.