Palestinian’s Respond to Covid-19 with Awareness and Solidarity 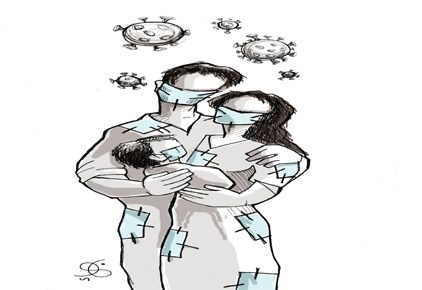 *Palestinian journalist. Member of “The Palestinian Media Collective in Lebanon “Interact”.
As soon as the Lebanese Ministry of Health declared a state of general mobilization and health emergency in the country, officials from the popular and health committees inside the Palestinian camps reacted quickly to keep the refugee population away from imminent risks.
Palestinian media campaigns were intensified. The UNRWA, along with the Palestinian Red Crescent and medical and civil defense organizations, carried out large sterilization and awareness campaigns, despite normal life being on hold inside the camps just like in other parts of Lebanon.
It was obvious that people understood the seriousness of this phase. They were gripped by fear of losing control over the situation if coronavirus infiltrates the already weak structures of the camps, as evidenced by the number of infections in the camps of Galilee in Baalbek and Al-Rashidiya, in southern Lebanon.
Unemployment and Poverty Rates…Twice as Bad
The number of Covid-19 cases inside the camps was not the only source of fear among the refugees. Their biggest concern was falling into a state of extreme poverty given the crises that Lebanon has been experiencing since the end of 2019, and the economic damage being twice as bad inside the camps.
According to UNRWA statistics in 2015, the unemployment rate among Palestinian refugees in Lebanon was 56%, and the poverty rate was 65%. These numbers increased significantly after the procedures of the Lebanese Ministry of Labor last summer, and the subsequent deterioration in economic conditions in Lebanon as a result of the dollar crisis that erupted last fall, until the Corona virus swept the world.
The Lebanese pound had been losing its value and the exchange rates for dollars had been on the rise along with the prices of essential commodities and necessities.
“Losing the job” is the omnipresent concern for the Palestinian refugees. This is how Husam Miari, a member of youth and relief activist groups, described the social situation that befell the refugees, especially after the Ministry of Labor’s decision and following the Lebanese uprising. He believes that the pandemic came to exacerbate the suffering and raise the unemployment rate among them. Besides, taxi drivers were affected by the general mobilization, the curfews, and the order to have cars with specific license plate numbers run on particular days. All of this entailed accumulated losses.  They had to still pay their car rental fees despite the interruption of their work and the poor living conditions they are facing. Per Miari, the crisis also affected shop owners and owners of small businesses, such as hairdressers. All camp inhabitants are in extreme poverty since the outbreak of the coronavirus pandemic.
Social Solidarity. Sharing the Suffering
In light of the severe poverty that swept the camps, Palestinian youth groups, charitable associations, and Palestinians living abroad gathered to organize a series of initiatives under the framework of social solidarity. Various forms of humanitarian contributions were carried out to alleviate the repercussions of the pandemic on the refugees, such as   cancelling house rental fees or accepting payment in Lebanese pounds. Campaigns included as well, distribution of bread, pastries, fresh vegetables, food, and financial assistance.
The youth activist Zeina Shreidi, led one of these initiatives at Ain al-Hilweh camp in Saida, southern Lebanon. Zeina was ranked third, with the team she leads in the International Youth Conference held at the United Nations headquarters in New York last year.
She used her social media pages as a platform to convey the suffering of Palestinian refugees in Lebanon and shed light on their difficult life and the health conditions they are enduring.
Shreidi says: “the initiative, despite its simplicity, collected more than 10 million Lebanese pounds. This amount contributed to meet the needs of more than 100 families that benefited from either financial assistance, food, medicine, or medical supplies.”
Shreidi participated in another initiative entitled: “We are here for each other.”  This initiative was launched last Ramadan and has never stopped. Its purpose is to distribute 250 vegetable baskets daily in four neighborhoods in Ain El-Helweh camp. The initiative will soon cover Tyre and Beirut camps.
Shreidi affirms that the importance of social solidarity inside the Palestinian camps in Lebanon is to sensitize people to others’ suffering. She considers that “the refugees are experiencing terrible injustice,” especially after the decision of former Minister of Labor, concerning the work procedures for foreign workers. The situation becomes worse following the Lebanese uprising, the economic crisis, and the coronavirus outbreak.
According to Miari, “we need people to donate money and share meals daily. However, this is not possible because the vast majority of the camp population cannot afford it”.
Nevertheless, relief campaigns are ongoing, especially those organized by Palestinians living abroad.  Well-off Palestinians residing in Lebanon are contributing as well. However, campaigns became smaller due to a lack of cash and the inability to transfer money in foreign currencies.
These solidarity initiatives are not enough to fill the gaps and meet the basic living needs but are necessary during the next phase, and contribute in a little way during the current period marked by “impoverishment” which apparently will last for a while.
Previous post
Next post