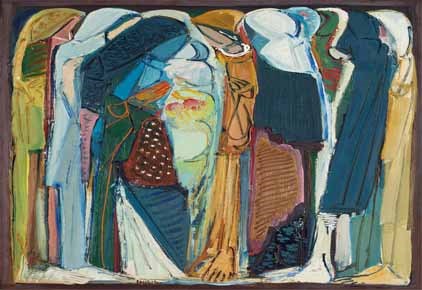 Writer and researcher in Palestinian affairs

Paul Guiragossian is part Armenian, part Lebanese and part Palestinian. He has chosen art as his identity, perhaps to express his multiple identities and origins. He is the painter of both Nakbas: the Armenian Nakba and the Palestinian Nakba. His father came from his homeland to Palestine with the second wave of displacement in 1922, when the Armenians of Cilicia and Upper Mesopotamia (Marash, Urfa, Mardin, Kilis and Entebbe), who were around 75 thousand in number, were expelled to Syria. Some of them moved from Syria to Lebanon and Palestine.

There is disagreement surrounding the birthdate and birthplace of Paul Guiragossian. Most sources mention 1926 as the year of his birth, and Jerusalem as the place. The likely truth is that he was born in Bethlehem on 25/12/1925, i.e. Christmas day. Perhaps his birth in the last week of 1925 caused a little shift in the date, and it became, according to the official records, 1926.
Paul Guiragossian studied at Saint Vincent, Jerusalem, then moved to the Salesian Monastery also in Jerusalem, where he trained at the hands of the painter Pietro Abaghetti, who taught him to draw icons in the Byzantine tradition. Drawing icons was one of the first artistic and spiritual influences of the city of Jerusalem on Guiragossian; he roamed its alleys and avenues and regularly visited its churches, monasteries, and towers until he reached the age of twenty-three.
The Armenians in Jerusalem were not just a foreign community; they were citizens who were integrated in their national and communal identity. They did not isolate themselves inside the Armenian neighbourhood like the Jews in their neighbourhood. They lived in all the neighbourhoods of Jerusalem and spread in all its modern areas like Talbiya, Katamon, and Baka’a. The Palestinian Armenians have had their human, religious and economic presence in Palestine for at least 1600 years. They have a share of the Church of the Holy Sepulchre, as well as their management of ancient religious and cultural institutions such as the Cathedral of St. James and the Library of the Monastery of St. Jacob, which contains the second largest collection of Armenian documents in the world in addition to around four thousand manuscripts. Moreover, the Armenian printing press was founded in 1848. Historically, the first photography school in the Arab world was established in Jerusalem by Bishop Yessay Garabedian (the patriarch later) in the late 1850s. The first photography studio in Jerusalem was founded in 1885 by Garabed Krikorian, from which the other studios originated.
Among the prominent figures of the Palestinian community are Levon Malakian, the most famous psychologist in Lebanon and the Arab world, before emigrating to Canada during the Lebanese Civil War, poet Léi Kernik of Tulkarm, Albert Agazarian (official spokesman of the Palestinian delegation to the Madrid Conference in 1991) and Emmannuel Hasasian (Vice-President of Bethlehem University and current Palestine Ambassador to England). One of the martyrs of the first intifada was Harout Kolozian, who was killed in Ramallah on 11/8/1991.
To Lebanon and from there to Europe
The number of Armenians in Jerusalem alone during the British mandate was about ten thousand people, meaning that the number today must be at least fifty thousand, but alas only one thousand remain. The reason for this is the process of deportation and expulsion (transfer), which the Armenians, like the rest of the sons and daughters of Palestine, underwent, in addition to the continuous emigration to the West. The Armenian Quarter in Jerusalem was exposed to security risks during the 1947-1948 war, especially since it was located between the Jewish Quarter and the rest of the Islamic neighbourhoods in the city. In these troubled circumstances, the father of Paul, a poor violinist, decided to move with his family to Lebanon where the family settled in the area of Burj Hammoud. In Beirut, Paul Giragosian worked as an art teacher in Armenian schools after completing his first oil painting in 1948. In 1956, he won the first prize in a painting competition organized by the Italian Cultural Institute. He received a scholarship to study fine arts at the Academy of Fine Arts of Florence (Accademia di Belle Arti di Firenze). In 1962 he received a second scholarship from the French government to study at Les Atelier Des Maîtres De L’Ecole De Paris.
Old and new
During the reign of President Fuad Shehab, Paul Giragousian became a Lebanese citizen. He was heavily engaged in the cultural and artistic life in Lebanon and was considered one of the most prominent figures of the modernist art movement in Beirut, although abstraction and tragedy continued to converge in his work until the last unfinished painting he was working on in 1993. His characters and themes were inspired by the common neighbourhoods of Bourj Hammoud, or by his Jerusalem memories, which continued to flicker with the displaced, oppressed, and exiled people. He tended to draw the human bodies as long towers with shadowy undefined faces, and he emphasized the breathless and sometimes humped masses, which bring to mind the image of the Palestinian and Armenian refugees in Lebanon.
****
Paul Guiragossian grew up poor, and lived adequately, but he became wealthy posthumously. One of his paintings was sold at an auction organized by Christie’s in 2013, twenty years after his death, for six hundred thousand dollars. But his fate did not slow him down much. He broke one of his feet in an elevator accident in 1974 and subsequently lived on crutches, thick glasses and a brush until he passed away in 1993.
Previous post
Next post