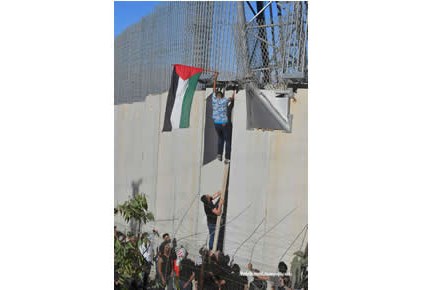 Marwan Abdel Aal, Palestinian novelist and a leader in the Popular Front for the Liberation of Palestine

The uprising of the new Palestinian generation was an urgent call for all Palestinians in their homes, settlements, gatherings and camps – the near and far diaspora. It breathed a new life force into the battle for the Palestinian identity.

Patriotism is the spirit that has revived cells of hope. Memories and dreams were renewed, and self-esteem, self-confidence and pride in belonging were restored. It dusted off their homeland’s house keys hidden in the corners of camps and made them feel hunger for the long road back home. This is the fourth generation of Palestinian exile, with all its nostalgia, groaning, torment, a rebellion of pain and hope, and now, the Palestine narrative is reviving.

Ten days that shook the world. At the gates of Jerusalem, the moral, collective, and combative spirit rose, transforming it from a defensive and instinctive reaction to an open societal clash in the face of the occupation, and a rebellion against the effects of the Nakba of exile, uprooting, rupture, displacement, abolition and marginalization, to redefine the concept of the people with its social, political and cultural components.

The new generation stood on the national identity front. Resistance is the best form of survival. Even in the ‘No’ that is said in the face of injustice and tyranny, it is present. If you believe you are right, stick to your beliefs, and they will help you survive, says Kenyan writer Ngugi Wa Thiong’o.  ,

The new generation realized that what achieves the legitimacy of survival is to ensure stable roots in the national culture, i.e. the question of identity before well-being. The colonial formula in which it was born wants loyalty and creates its identity for it, not to be Palestinian, to become everything except a Palestinian. To become a hybrid of identity and a hybrid of loyalties. However, the new generation presented patriotism over ideology and politics together and blew it up as a latent force in awareness, behavior and culture at the moment of compromising everything sacred, to demonstrate the stupidity of the force that brought history back to the facts of the Nakba, so it mobilized repressed patriotism for 73 years as a reference to patriotic action and national sacrifice. It culminates in the streets of the world chanting: “Palestine is free.”

The Palestinian political movement with its organizational factions faced political dissolution, squandering, and annihilation projects, as in the “Deal of the Century” that intensified the moment of central challenge, and was met with automatic and collective hostile rejection based on organizing loss, or emptying the state of anger, and remained captive to a vicious circle of hesitation. The denial of the opportunity for conflict to root and modernize the conflict vision, rejuvenating the Palestinian national movement, and raising the concept of national unity in the popular conscience, including the strong elements of the Palestinian national project over the entire space of the Palestinian people’s presence, as a criterion for patriotism, was not reflected. The last intifada came to knock down the wall by the force of the popular will, which took the initiative and brought about a qualitative strategic shift through which it played the role of the required transition from short-lived emotion to positive qualitative action, a serious strategic activity that requires its implementation at this historical moment.

The Palestinian refugee was never separated from his patriotism; since no one contributed to its evolution and development, patriotism is not papers and documents but personality, self-affirmation, existence, right, history, future, and identity. Therefore, with the Jerusalem Intifada, the Palestinian felt the pure national idea that symbolizes its historical legitimacy, as an alternative to obliteration and elimination and to the consumed and closed memory, making the national achievement of the entire Palestinian people a victory, by confronting the negative mentality that reduces it to just a number, a camp and a situation, sensing that the besieged Gaza is relieving it from isolation, and thus break the psychological “ghetto”. The refrains of the youth of Bab al-Amoud, Sheikh Jarrah, Lod, Acre, Haifa and Umm al-Fahm, even heard in a town in the Palestinian Galilee, was a mere triumph, as if granting a new identification card about replacing its stolen identity as a result of the abolitionist policy, which sought to transform the identity of the diaspora into a diaspora identity, and to transform the refugee from a fighter for the return home to a lost refugee looking for any homeland!

The operations of targeting national identity, sabotaging the national spirit by hollowing out society from its creative energy elements, ignorance and lack of awareness, for the “mother exile” to become the alternative to the motherland, never stopped. But the new understanding and the act of resistance re-created its role in promoting national belonging in the return camps in Lebanon and making the refugee feel that his Palestine is a reality and not an option. His cause is national and not just humanitarian. His case is political, not just relief.

There is a sign of the positive energy emitting with its great national symbolism. It is almost unbelievable that young people in Lebanon’s camps form many financial collection committees to contribute to the reconstruction of Gaza and that spontaneous mass demonstrations roam the alleys of the camps and take to the streets of the capital, Beirut, as an unfamiliar human torrent, celebrating the pride of his Palestine, its flag and its keffiyeh, and competes with a charged emotion to reach the borders to confirm adherence to the right of return. Cultural and media platforms, visual and audio, and social media were launched to broadcast messages quickly affirming the original names of the villages and towns of occupied Palestine, under the impact of the spirit of rebellion and resistance, with pride, courage and vigor that establishes something else; a new confidence that might liberate it from marginalization and commodification of patriotism, in the bazaars of unfair policies, and sectarian tensions that deprive them of human rights and take them out of every legal, economic or living equation under compelling circumstances, this national existence is a victim of the sectarian views, its calculations are national and above the secondary considerations and the illusory and selfish quotas that may drown the boat with what it carried and those on it, citizens and refugees. Establishing this new spirit  assumes:

(1) Investing in Palestinian patriotism by ending the discriminatory policies against Palestinians, and adopting policies that are protective and friendly to them, away from the complex of being targeted. This is a measure of the political positions that support the struggle of the Palestinian people;

(2) The liberation of the humanitarian demands of the Palestinians in Lebanon from the “phobia” of settlement, which lays the grounds for liberating the Palestinian struggle and youth energies from the factors of exclusion, division, factionalism and regionalism, and that the political discourse on the Palestinian cause is accompanied by political practice, embodying the unity of the everyday struggle and the first goal to achieve the right of dignity, the greater goal is the right of return to Palestine;

(3) Working on a unique Palestinian political formula in Lebanon that is sponsored by the national community as a supreme Palestinian policy, for a solidarity and symbiotic society to take care of the conditions of Palestinian refugees in Lebanon, and from it unified popular committees that bring together institutions in all the camps with specialists and people in business to follow up on developments and appreciate the daily needs of the Palestinian people.

Perhaps the oxygen of Palestinian patriotism will dissipate the toxins of settlement and its attachments of hatred, racism and prejudice when the homeland becomes the camp’s title and identity, and as a duty that is not above it and is not replaced by an alternative, settlement, nationality or an alternative homeland, but rather a truth written in blood. Therefore, it imposes the seriousness in dealing with a cause of this lofty, noble and humaneness, and adherence to the right of refugees to return and within a Palestinian, Lebanese, Arab national strategy, and before that, a solution to the political divide between affirming the justice of the cause and denying justice for its people!