Rejecting prejudices is a condition for the Palestinian-Lebanese dialogue 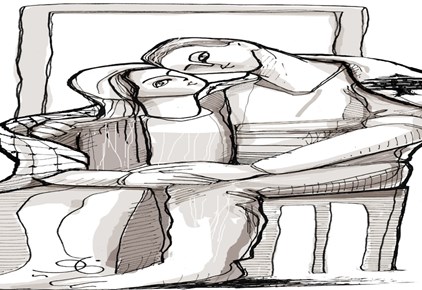 * Member of the Palestinian National Council

I was twelve years old when the defeat in the 1948 war forced us to leave Palestine for Lebanon. I remember the suffering endured while walking to Bint Jbeil in South Lebanon amid the screaming of children, the moaning of the elderly, and the cries of women. Everyone complained about hunger, thirst and fatigue. Our suffering as Palestinians was alleviated by the welcome we received from the President of the Republic Bechara Al-Khoury, Prime Minister Riad Al-Solh and the Minister of Foreign Affairs Hamid Franjieh, and by their comforting words.

At the time, the Palestinians in Lebanon were considered a human resource in three important areas. They included capitalists, educated people, and a workforce. In this climate, no inconsitencies arose between the Palestinians and the Lebanese people.

During that period, I got acquainted with the Altha’r (Revenge) bulletin that was published by the Organization for Resisting Peace with Israel. It was widely circulated because it raised the problems of the refugees in the camps, in addition to undertaking the tasks of mobilization, incitement and morale lifting at a time when people experienced, in addition to their miserable humanitarian conditions, feelings of frustration and despair as a people forced to leave their homeland, with all the connotations it carried in terms of history and values. But the most important thing is that this bulletin exposed housing, resettlement and displacement agendas put forward with the strong support and generous funding of the United States to solve the refugee problem, as a prelude to reconciliation with Israel and to putting an end to the Palestinian cause.

The bulletin led me to meet a group of young people and together we formed the first party cell of the Arab Nationalist Youth for the Liberation of Palestine (later known as the Arab Nationalist Movement) in the south) under the leadership of Professor Mohsen Ibrahim. However, I was the only Palestinian and the youngest member in this group.

The main concern of the group was to challenge the successive agendas put forward in order to solve the refugee problem, establish alliances, and achieve reconciliation with Israel. These agendas did not exclude Lebanon. Facts and realities confirm that those who opposed these agendas (not only in Lebanon, but also in all asylum states) were the Palestinians.

The Palestinians did not take part in the so-called 1958 revolution. However, they suffered the most damage from the implementation of the martial law which turned the camps into “ghettos” and required opening offices of the Second Bureau, resulting in what we used to call arbitrary arrest made without a specific charge or trial, for a period specified by the intelligence officer in charge.

This situation lasted until April 1969 when a popular uprising was staged in the camps. The rebels broke into the offices of the Second Bureau and expelled their personnel. It was supported by another popular uprising led by the Lebanese National Movement that caused political paralysis in the country and the intervention of President Abdel Nasser. As a result, a settlement known as the Cairo Agreement legitimized Palestinian military presence and the Palestinian right to engage in armed struggle across Lebanese territories. The agreement was repealed by the Lebanese Parliament in 1987 in return for abrogating the May 17 Agreement.

After the civil war, the Palestinians felt that they were subject to retaliation by different parties through the massacres committed or sponsored by the Israeli enemy, as well as the destructive War of the Camps. I was destined to participate in three attempts that could have constituted a prelude to addressing Palestinian-Lebanese relations.

In the first one, I was a member of  a committee chaired by Professor Shafiq Al-Hout and established pursuant to an agreement with Philip Habib. In that committee I had to coordinate with the Lebanese State on the situation of the Palestinians in Lebanon. But the party (the State Security) that was assigned to coordinate with us displayed a negative attitude. After we held two meetings, they advised us to leave the country and arrested those who refused to do so. I was among the arrested persons.

The second one had to do with a meeting held in Cairo in 1990 between two official delegations: the Lebanese delegation headed by Fares Boueiz, Lebanon’s Minister of Foreign Affairs, and the Palestinian delegation, of which I was a member, headed by Farouk Al-Kaddoumi, Head of the Political Department of the Palestine Liberation Organization (PLO). At that time, I was also an official of the Popular Front for the Liberation of Palestine (PFLP) and an official of the Palestine National Action Plan (NAP), a framework that included all PLO factions in Lebanon.
An agreement, which I can call a road map, was reached with the following three headings: military presence, security of the camps, and civil and social rights.

The third attempt is related to my meeting with Sheikh Rafik Hariri after he assumed premiership for the first time I presented to him an overview of the developments since 1982 and handed him the relevant documents. Contrary to our expectations, the gravest decisions were issued. Accordingly, the Palestinians were denied the right to property and the visa became mandatory if the Palestinian holder of the Lebanese travel document spent more than 6 months outside Lebanon.

How can bridges be built to establish healthy relations between the Lebanese people and the Palestinians who have been forcibly residing in Lebanon by virtue of Lebanese documents since 1948?

1. Some circles taking a negative stance towards the Palestinians should address the issue realistically and objectively, which helps acknowledging two facts. First, Palestinians adhere to the right of return to their homeland and oppose resettlement, displacement and naturalization agendas. As for resettlement, it is a scarecrow used by the enemy to create a rift between the Palestinians and the Lebanese. Second, Palestinian presence in Lebanon contributes to the growth and development of the country, and granting them the right to work and own property is in Lebanon’s interest as well as the Palestinians’.

2. Zionist ambitions go beyond the usurpation of Palestine and extend from the Euphrates to the entire Arab region, and above all Lebanon.

3. The parties holding prejudices against each other (Palestinians and Lebanese) have not opened wide the door for dialogue. The first attempt was made by a Palestinian delegation headed by Salah Khalaf, known as Abu Iyad, of which I was a member, and a Kataeb Party delegation headed by Amin Gemayel. The atmosphere was positive and we were about to produce a joint document, but the Ain Al-Remmaneh massacre disrupted the whole process.

4. A realistic look at the Palestinians dismisses the accusations made against them as being the root of problems and conflicts in Lebanon. Without looking back at history,  is it possible to say they are they behind the critical situation in Lebanon now?

5. The Palestinians should no longer dealt with from a security perspective as this has adverse consequences and strains Palestinian-Lebanese relations, in addition to undermining coexistence. The right thing is to agree on cooperation formulas and to grant the Palestinians their civil and social rights in line with international instruments such as the Universal Declaration of Human Rights and the 1951 Refugee Convention and its 1967 Protocol, and in line with the Lebanese officials’ supportive stance reiterated since they first welcomed the refugees until now.

We need to build bridges between us, Palestinians and Lebanese. The first prerequisite is the elimination of our prejudices and dealing with each other realistically and objectively.