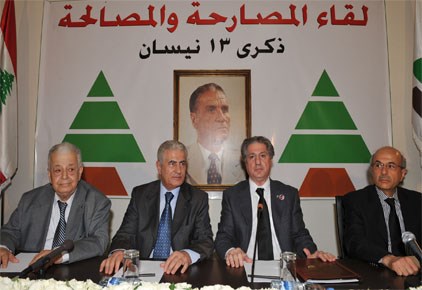 Fatah Central Committee member, former Representative of the Palestine Liberation Organization in Lebanon.
My assignment to handle the Lebanon file in 2006, as an unexpected mission, was a hard challenge because I am familiar with the complexities of Lebanon and their specificity, as well as the extend of the accumulated pain and anxiety generated by the wars with Israel in addition to internal and external interactions The martyrdom of PM Rafik Hariri, was just the beginning of these interactions and its subsequent repercussions that may affect everyone. This assignment required the use of my full authority as the representative of the Executive Committee of the Palestine Liberation Organization and an official of the Fatah movement in order to build the best relations between the Palestinian and Lebanese leadership. The authorization was signed by President Abu Mazen, and this enabled me to deal, on an equal level, with the various parties, and opened new doors and horizons for work.
In consultation with the leaders of all the Palestinian factions in Lebanon, we have adopted a plan affirming our rejection of resettlement and displacement, which won the estimation of Lebanese officials. Our camps will not be a thorn in the side of the civil peace; they will not be a refuge for those fleeing from Lebanese justice; the sovereignty is for Lebanon (and the justice is for the Palestinians)
We worked to lift restrictions on the Palestinians’ practice of some professions, and on the freedom of movement. We managed to facilitate identities acquiring procedures. We engaged in talks with all parties that culminated in 2006 in the resumption of the Palestinian representation, which represented a Lebanese referendum for all the various political and sectarian affiliations, and endorsed the establishment of the principle of collective leadership, and identified the common points that unite us Palestinians in Lebanon.
We left the issues of disagreement in the background, away from their dominance in the Lebanese arena. We collaborated with the various factions as one family, who can be a hoist to and not a burden on our Lebanese brothers. We have imbedded a new understanding to the relationship that has persisted and will move forward regardless of the magnitude of the tumults. Especially since we have survived the massacre intended for the entire Palestinian presence, a cost paid by Nahr al-Bared camp, where we and the Lebanese Army fought in the same trench against terrorism. We successfully prevented the plot to spread the calamity to other camps.
Lebanon deserves more to restore trust on the basis of overcoming the memory of mass graves and identity executions, and to find a formula that guarantees the future and the safety of Palestinian refugees. As guests to Lebanon, they believe in the right to return to their homeland Palestine, which dwells in their hearts no matter how long the injustice of the occupation lasts. Hence, we issued the Declaration of Lebanon–a word of honour, a covenant and a token of loyalty to our Christian brothers in Lebanon, considering Palestine as the title and primary site of the message, and Lebanon as the title of the cultural interaction in the Middle East.
We exercised this act of honour in word and deed and have forged the best and most honest fraternal relations to preserve Lebanon’s interests, sovereignty and security, and to safeguard the Palestinian people. We have established the best relations with the Kata’eb Party under the leadership of President Amine Gemayel on the basis of putting the past behind us with no allusion to glory or hatred. We have built the best relations with President Michel Aoun, who has returned from exile, by holding private meetings and an in-depth examination of all issues of common concern. We founded a strong relationship with Bkirki, Patriarch Sfeir, and all the party leaders and Muslim and Christian clerics, not excluding anyone.
We have set up Palestinian activities in East as well as in West Beirut, considering ourselves a unified entity that ensures the best relations with all. Our presence was greatly reflected on the structures and divisions of all the Lebanese, whereby President Abu Mazen paid a state visit to Lebanon. A number of Lebanese precursors helped make this happen. The Palestinian cause returned to its Lebanese homeland without fear for the future of the Palestinians in Lebanon until their dream of returning home to live in security, freedom and peace in their independent Palestinian state with Jerusalem as its capital is realized.
The difficult economic and living conditions of our Palestinian people in Lebanon, and the high unemployment rates from which we suffer, constitute a bleeding wound for our leadership, and pain and distress to be heeded. This matter creates problems for both us and Lebanon that must be dealt with. The deprivation of the Palestinians of 73 professions in Lebanon represents a major obstacle to their lives. The Lebanese government must reconsider this matter in order to alleviate the suffering of our people, as well as the regional and international interventions in Lebanon which definitely affect the public life of all its residents. Therefore, it is necessary to reject and resist these interventions so that Lebanon and its people enjoy stability, security and peace.
The issue of Palestinian refugees is one of the core issues in the Arab-Israeli conflict and, particularly in Lebanon, it has been and continues to be the major concern for the Palestinian political leadership. During the Camp David talks, the Palestinian refugees issue in Lebanon was a top priority for talks with U.S. and Israeli parties on their return to their homeland to rid them of the torments of asylum that have lasted more than 70 years. The continuation of the Nahr al-Bared tragedy and many procedures on the Palestinians on every level, including the status of UNRWA, must be resolved, without delay, because of their importance as a stabilizing factor for Lebanon, to which we wish all progress and prosperity from the bottom of our hearts.
Previous post
Next post