Robert Alassaad: On the Way to Fame 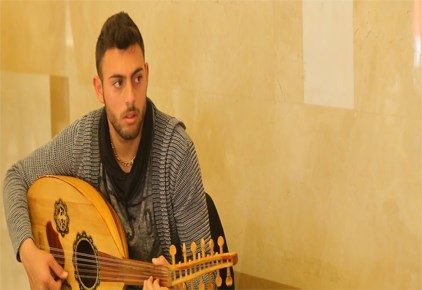 He is a young music composer and arranger who is approached by top singers, famous songwriters and composers to collaborate with him on arranging or composing their songs or even on writing their lyrics. These include the sons of the late great Wadih El Safi, Najwa Karam, Pascale Machaalani, Moeen Charif, Nassif Zeytoun, Dana Halabi, Nizar Francis, Jihad Hadchiti, Melhem Abou Chedid, among others.
Robert Alassaad was born 21 years ago in Dbayeh refugee camp, whose walls don’t display posters of Palestinian leaders and martyrs, murals and slogans, and where timid flowers adorn what resembles the doorsteps of houses.
The little two-room house with a small kitchen can be reached through narrow, winding alleys which open up to other small houses with roofs mostly made of zinc and fiber cement shingles, locals call by their brand name: Eternit. Robert’s father dedicated the large room or the “living room” to a fully equipped studio with all the necessary instruments for music arrangement that he had bought on credit. Meanwhile, other musical instruments, such as the oud, tabla, guitar, digital piano and others, are displayed on shelves on the walls. Robert plays 13 musical instruments, and had won several musical awards as a child.
He attended the UNRWA primary school, but when it was closed down his parents moved him to the Dbayeh public school. He was later expelled from four schools for different reasons. His parents believe the reason is being “Palestinian.” During the outbreaks of clashes in East Beirut, where the camp is, the family fled to Homs, Syrian. There, they met the talented young George Wassouf, who would sing with the little Robert the song “Mama Ya Mama.” The family recognized Robert’s. It couldn’t be otherwise in a family of musicians: his grandfather, father and uncle.
Robert’s father enrolled him at the National Higher Conservatory of Music in Zokak el-Blat at the age of five, where he studied music and piano until the age of 12. He learned to play about 13 instruments, from which he loves, oud, tabla, and the piano.
His father made a living as a fisherman and took other jobs to feed his family. He used to commute daily with his children from Dbayeh to the conservatory in Zokak el-Blat, rain or shine. The older brother studied music for two years but then decided to make a living from fishing and working at the fish market.
At the age of six, Robert won the first prize in the Little Big Star show on Al-Jaras Radio. At the age of eight he represented Palestine in a talent show on MBC1 Channel in Abu Dhabi and came first among participants from eight Arab countries. At the age of 13, he won the first place in the second season of a talent show for children on OTV, Talenteen. They hadn’t taken all his details and the producers were surprised to learn that he held a “Palestinian refugee document.”
The family’s economic situation prevented Robert from completing his schooling and he was unable to reach fame without the means to appoint a manager or the contacts. His father took him out of school so to focus on honing his talent and expanding his capabilities. His first music arrangements were for Madonna, Ibrahim Wadih Al-Safi, and Jacqueline, among others.
His father’s dream is to bring back the Al-Layali al-Musiqiyya (Music Nights) band founded by Robert’s grandfather Raji Fouad Alassaad and his two sons. The band toured Lebanon in the 1980s performing Tarab music.
Today, Robert has many songs in his repertoire, including a recent one by Pascale Machaalani, and he is currently working on a song with Wael Kfoury. But his name as music arranger and composer always comes at the bottom of the closing credits. He is working hard to fulfil his dream to see his name come first.
Previous post
Next post