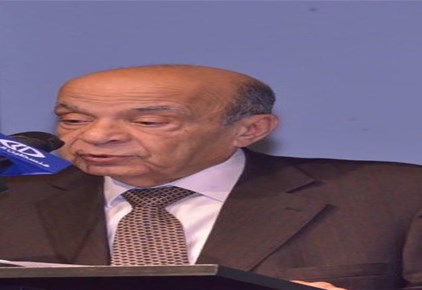 *Palestinian writer and researcher.
He was twelve years old when he left Jaffa with his family on the last boat to sail out of the city’s port. They landed in Beirut, the city of his mother Widad Al-Mahmasani. This is where he had to confront life in exile. Nevertheless, Lebanon was not an exile to him, but a homeland. He married one of its brightest girls: Salma Al-Najjar (Her sister Leila Sharaf was a member of the Senate in Jordan). He received his PhD in law from Saint Joseph University in 1961. He had also received a master’s degree in economics from the Lebanese University in 1959, and a French degree in law from the Lebanese University in 1958. Holding all these degrees enabled him to start his career as a university professor. He worked as a professor of economics and law at the American University, and as a professor of law at the Lebanese university.
Like his father, Mustafa Murad Al-Dabbagh, author of the encyclopedia entitled “Our Country Palestine”, who had to rewrite the chapters about Jaffa in Beirut, after he lost them in the sea, Salah remained involved in the Palestinian issues, despite being immersed in his law and teaching career and having his personal life to manage.
He joined the “Arab Nationalist Movement” when he was still studying. At the same time, he presided “Al-Orwa Al-Wothka” association at the American University.  When the Palestine Liberation Organization was founded in 1964, he was appointed as the General Director of the Political Department. He was also elected as the Chairman of the Board of Directors of the Palestinian National Fund in 1980, besides being a member of the Palestinian National Council.  When the Oslo Agreement was concluded in 1993, he submitted his resignation to protest against the National Council’s ratification of the agreement. In 2016, he became President of the Arab National Forum, succeeding Dr. Muhammad Al-Majzoub. He was also a member of the Arab National Congress since 1992.
Given his valuable experience, his sound judgement, and his wisdom, we all sought his advice, not only in matters related to law, but in various matters.
Salah al-Din Al-Dabbagh was born in Jaffa in 1936. He studied at “Al Omarieh” School in Jaffa, then at “Al- Najah” College in Nablus. He finished his high school studies at the IC Preparatory School in Beirut and then attended the American University where he earned a BA in economics in 1959, then a master’s in 1965. He traveled to the United States to study law and received a master’s degree from the University of Dallas. He established a private attorney’s office in 1967. His publications as well as his translations are numerous, and include:
Arab Sovereignty over the Gulf of Aqaba and the Tiran Strait ( (1967
The Soviet Union and the Palestinian Cause (1968)
Agrarian Reform in the United Arab Republic (PhD thesis)
Studies about the Federal State (translation – 1965)
Introduction to the Philosophy of Law (translation – 1967)
Income, Employment and Economic Growth (translation – 1968)
Salah al-Din Al-Dabbagh died on the eighth of January 2020, as if the skies in Lebanon and Palestine needed more sadness.
Previous post
Next post