Sleiman: Conflicts of Interests is a Reason for Not Disarming Palestinian Factions 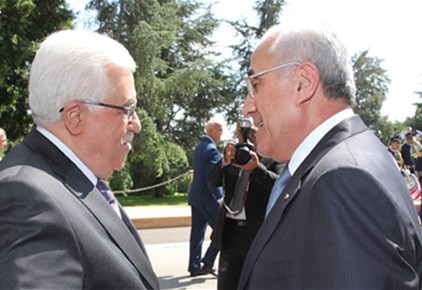 * Interview with Former President M. Sleiman
Former President General Michel Sleiman is apprehensive that the failure and collapse of the Lebanese state would lead to the extirpation of the nationalist idea, given that there are people working for the benefit of their own “mini-states.” In a meeting with Jousour, Sleiman expressed that there was no solution to the Palestinian camps issue without a social contract, followed by formal legal regulation. This should first be preceded by an agreement among the Palestinian factions on the formation of a single authority to deal with the State and arrive together at a security solution.

President Michel Sleiman asserts that Lebanon has not lost its independence. “Riad al-Solh said in his Cabinet’s declaration in 1946 that we have created the state and we still have to create the homeland,” Sleiman said. “The state has been built with all its components, including drafting a Constitution, enacting laws, defining powers, privileges, rights and duties, and the national charter.” Unfortunately, the state remains to beset by the rivalries of “mini-states,” Palestinian and Lebanese alike.

Permanent settlement of refugees and the return of this fear

Sleiman describes the fear of the permanent settlement of refugees as existent because no one wants to allow the return of Palestinian refugees to their homeland. We fear permanent settlement, but only the international community is able to provide fair solutions, and this will be through a two-state solution. Lebanon never accepted permanent settlement and never will. The Palestinians are present, and we cannot deny them their human rights and prevent them from improving their social conditions, and this is something that the Lebanese are at ease with primarily.
Lebanon cannot shoulder successive settlement processes because this will deal a blow to its formula and model [sectarian political power balance] that has been strengthened despite all the events and the calamities of recent years. The two-state solution and the return of Palestinians to the West Bank or Gaza should be secured.
Lebanon can no longer bear the demographic pressure and may explode one day. What resources can we provide for Palestinian refugees who are becoming more educated, and given that decent jobs must be provided for them? There is a high unemployment rate in Lebanon, which is difficult under its conditions and contraction of the jobs market for everyone without exception. Improving the conditions of Palestinians has nothing to do with permanent settlement, it is rather an obligation imposed by international and humanitarian laws.
Previous post
Next post