Taking Refuge in the Camp 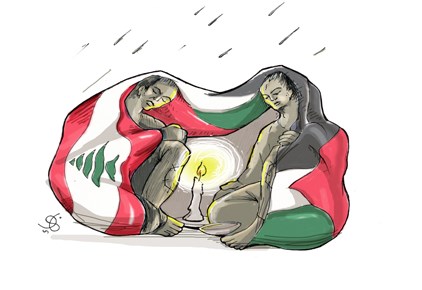 * Palestinian Journalist
Umm Hussein walks up and down the streets and pathways of Rashidiyeh refugee camp calling with her husky and shy voice trying to sell anything that she has on her old wooden cart, touring the Palestinian refugees.
Wearily, Umm Hussein pushes the wooden wheeled cart, and camp residents look up to her with astonishment and respect and salute her courage and obstinacy.
She calls to sell her stock in a tone that differs slightly from the Palestinian accent spoken in the camp. She is not a refugee who came from Palestine and has Nakba memories.
“Umm Hussein” came to the camp twenty years ago with her two daughters and her infant child after her husband deserted her and left her alone to face the hardships of life, so she decided to resort to the camp because there she thought, “was the only place to adapt to poverty and oppression.”
According to Nada – Umm Hussein real name -“the camp means more than any other region. “My will – she said – is that, when I die, I want to be buried here.
Winter night in Umm Hussein’s house – if one can call it a home – reminds you of the Middle Ages. After unloading from her wooden cart some odds and ends that she collected while roaming about the camp, she heats a small bowl of tin as a means of heating, and candle flame is the only source of light in the place – not by love of romance – but rather because there is no subscription to electricity. As for the Internet, maybe it is better if you start by asking if she has a mobile phone!
Umm Hussein is not yet 50 years old, but whoever sees her thinks she is 70. The wrinkles of this woman’s face witness various stories of asylum and fatigue, even though she was not born a refugee, the popular saying “birds of a feather flock together” clearly applies here!
“I raised my children every inch as a result of my fatigue, stress and tears; many nights went by and we had no food – she said. I know that I belong here, since in the camp a lot of people share similar living conditions, and whatever happens to me, will happen to others.”
*******
Not far from the Rashidiyeh camp, rains invade Abu Bechara’s house in Burj Alchamali camp, and the roof of his house turns into a sieve with water penetrating from all directions, his only solution is to spread all over the house metal pots to collect rainwater, there are even containers on his bed!
When you enter Abu Beshara’s house, the Palestinian and Lebanese banner welcome you with a cross hanging and a picture of Mother Mary, with Jesus in her arms. This is how Umm Beshara embraces her husband, Mtanious Haddad, better known by Abu Beshara, a Lebanese Christian living in the Palestinian refugee’s camp, Burj Alchamali for more than fifty years.
Abu Beshara is one of the men in the camp. Everybody knows him as a well-intentioned person, always aiming to solve problems and to ask for young women’s hand in marriage. He knows everybody, big or small, and all their relatives. He laughs whenever someone is surprised to know that a Lebanese Christian can live in the camp, and how he can cope with such a different lifestyle. Umm Beshara answers this question by saying: “when my daughter got married my son-in-law wanted us to live with them outside the camp. However, I, if I leave my neighborhood for two days, they all start contacting me and calling me to know how things are and how I am doing. the life I found in the camp; I didn’t find elsewhere.”
Despite the fact that Abu Beshara is Lebanese, he cannot repair his house and blocked the roof holes because he needs a permit to bring into the camp construction materials, as is the case for all refugees in the camp.
When asked: “Do you love Palestine, uncle?”
“Oh! Palestine is very dear to us, my son. I joined the Palestinian revolution even before the Palestinians.” He replies with tears from his eyes of which he barely sees.”
Diseases take over Abu Beshara’s 80-year old body, including diabetes, blood pressure, heart and artery illnesses, etc. He is struggling to secure the necessary medication, since he does not benefit from UNRWA, as a non-Palestinian and does not receive any assistance from the Lebanese authorities. To make the matter even worse and considering the prevailing economic conditions in the country, the salary of his son who provides for him, has be reduced by half.
Abu Beshara’s original citizenship did not help him in guaranteeing his necessary medication, nor helped Umm Hussein to live decently, and consequently they live as refugees in their own country.

Extracts:
When I die, I want to be buried in the camp
Abu Beshara, a Lebanese Christian living in the Palestinian refugee’s camp, Burj Alchamali for more than fifty years, a well-intentioned person, always aiming to solve problems and to ask for young women’s hand in marriage. He knows everybody, big or small, and all their relatives.