The confrontation between Israel and the Palestinians: 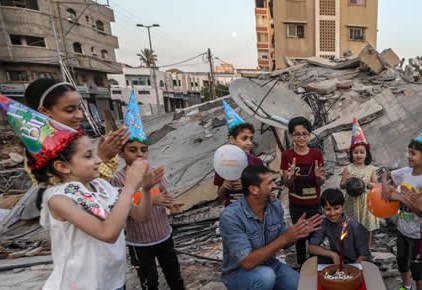 From the river to the sea, the occupied Palestinian territories witnessed a massive popular uprising, unprecedented since the first and second intifadas. Significant developments characterized it:

First, the stubborn, brave and conscious resistance of the youth of East Jerusalem towards the policy of Israel, its soldiers and police, and their engagement in addressing world public opinion. This brought great sympathy to their cause by showing them as a victim, by exposing Israel for its true nature as a colonial, settler and racist state that uses excessive force in the face of peaceful protests.

Israel harnesses its security services to support attacks by extremist and religious colonists. It is evident that Palestinians all over the world contributed to this campaign on social media, which made remarkable breakthroughs in the Western countries, including the United States of America.

Second, the participation of the Palestinians of 1948 in an active and significant way in the activities of the popular uprising in East Jerusalem. They embraced it, and this culminated in a massive march on Jerusalem, from the cities and villages of the Palestinians of 1948 on May 8 (the Night of Revelation in the month of Ramadan), which had a great effect in confusing the political and military institutions in Israel, especially since this combined with the comprehensiveness of an uprising of all Palestinians – from the river to the sea.

This development (it took place before the missile confrontations) was the main reason for Israel’s retreat from continuing its position in Bab al-Amud, as it dismantled the iron barriers. Regarding the evacuation in the Sheikh Jarrah neighborhood – the court session was postponed to decide on this matter on May 9.

Third, the entry of the Hamas movement into a military confrontation with Israel with the use of  missiles. This was a critical development, especially since it was Hamas that took the initiative this time, in contrast to the three previous wars Israel launched on Gaza (2008, 2012, 2014), and that this confrontation demonstrated the missile force stored by that Hamas which blanketed the Israelis with bombardment in many of their cities, including Tel Aviv – an unprecedented and surprising manner, especially for Israel itself, and its Western allies.

In addition to this, a shift towards militarization and the missile war increased Israel’s ferocity in its attempts to destroy Gaza, its buildings and infrastructure. It also added attempts to impose itself in various Palestinian territories – manifested in its policy of repression against the Palestinians in Jerusalem, as in Haifa, Jaffa, Lydd, and Acre.

Overall, these developments created multiple and conflicting repercussions, including:

First, the decline of the Palestinian leadership, due to the poor performance in support of the popular uprising, or under Hamas’s leadership, by taking the initiative to launch strikes against Israel, especially since the rebellion came in a circumstance in which Mahmoud Abbas, the head of the organization and the Authority and Fatah, has reached the most extreme cases of his weakness, and the fading of his popular legitimacy, after postponing or canceling the elections, and overthrowing all agreements to end the division, and with the setback in his Fatah movement. However, that war, despite the preceding, contributed to getting the position of the president afloat, albeit unintentionally from Hamas, as he became the accepted interlocutor or negotiator in the international community for the Palestinians, and concerning calm and reconstruction projects, by classifying Hamas as a terrorist movement, no one can deal with.

Second, despite the weakening of the popular legitimacy of the president and his Fatah movement, the Palestinian reality is very complex and interferes with the wills of the external parties, as the alternative that exists in practice is Hamas, which is unacceptable, and perhaps inappropriate for the Palestinians, by its nature, given the demise of the other factions, leftist, which no longer have a strong position among the Palestinians at home and abroad. Furthermore, it no longer has a role in confronting Israel, not to mention the lack of its political or intellectual identity and reliance on its history. In such circumstances, the difficulty of generating an alternative comes from the Palestinians’ lack of a common territory, with their dispersion, their subjection to multiple and disparate regimes, and their dependence on rents from the supporting countries (and their dependency on them) more than their dependence on their people, and the reality of their lethargic political movement, which lacks democracy, internal movements, and deliberation and critical review, and the collective frameworks, and finally because of a mass of full-time employees, in the authority, the organization, and the factions, of approximately a quarter of a million. Thus, each one of these factors constrains any attempt to bring about political change, and this is the secret of the strength of the weak Palestinian leadership towards the outside and strong towards its people. The idea is that political change is an objective need that is available. Still, the sufficient condition requires the availability of the subjective factor, and with it the Arab and international conditions that allow this.

Third, on the Israeli level, the ruling political forces in Israel, and Israeli society, this time, felt that controlling the Palestinians, or subjugating them, was not that easy. In one moment, the borders between them vanished. In the West Bank, Gaza, Jerusalem, the regions of 48 and countries of asylum and diaspora, they appeared as one people, as if nothing had happened in 73 years. Instead, they returned to the same narrative, which was founded on the establishment of Israel, the displacement of the Palestinian people, and the birth of the refugee problem, overthrowing the illusions that spread with the two-state solution (1974) and the Oslo Agreement (1993), which were both established on the displacement of the historical story based on the Nakba file (1948) into a novel based on Israel’s occupation of the West Bank and Gaza (1967). The second issue is that the Palestinians fight with everything, with their stubbornness and faith in their cause, with a high willingness to sacrifice, whatever the costs. As it turned out, the besieged Gaza Strip accumulated a military force that could confuse or afflict Israel and withstand its brutality, knowing that Arab countries were unable to do so, as happened in the June 1967 war. Therefore, it is too early to speculate how Israel will deal with this particular security development, the easy and the soft way or the hard and harsh way, the political way or the military way.

The question now is to see whether or whether not the Palestinians can invest their sacrifice and heroism in developing their national movement and solidifying its promise, under the principle of the oneness of the people, the land, the cause and the historical narrative, and whether or whether not the Arab and international situation will allow them to win even by points, this time, over Israel.