The Duty to Remember and Speak Out 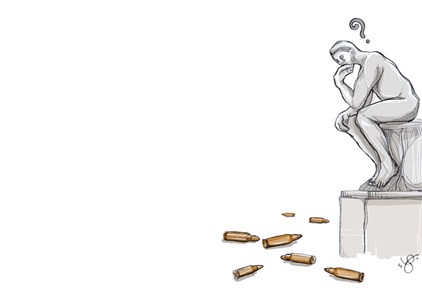 * Honorary Professor at the Faculty of Law and Political Science, Saint Joseph University; lawyer; former minister of justice.
The Lebanese-Palestinian war has yet to be chronicled; we have not learned its secrets and we do not understand who was behind any of the decisions. For my part, I know that we were all victims of a bloody conflict.
Those days in 1975-1976 were difficult, with many areas shelled.
Jules Boustany, the Lebanese army intelligence chief, would put a helicopter at the disposal of “Abu Zaim” and “Abu Hassan,” representatives of the Palestinian National Liberation Movement (Fatah), to carry them to the Holy Spirit University in Kaslik, where we met many times with Abbot Charbel Kassis, Abbot Boulos Naaman, and the late Shaker Abu Suleiman and Dr. Saeed Bustani. Every time we agreed on a cease-fire, there would be a special and congruous atmosphere, as if we held the same view on matters and employed the same reasoning. When I would return to Baabdat, passing through Bikfaya and bearing the good news of the ceasefire to Sheikh Pierre Gemayel and his wife Genevieve, the latter would ask me with a measure of sarcasm: “So, you’ve accomplished a Herculean task.”
Then the situation would take a turn for the worse again and the shelling would come back.
I think that others understood this kind of concord. The impression was that none of us wanted the war, that we were prepared to reach an agreement, and that the war and operations were subject to hidden orders, which many called the “fifth column.”
Many continue to believe to this day that getting rid of the “Lebanese formula” [sectarian political quotas] began with the start of the use of the Palestinian cause to put an end to it, especially after the Black September and the increase in the number of Palestinians in Lebanon, and the security turmoil of the 1973 and later the 1975 incidents. At the time, the Arabs’ primary cause appeared to be a prologue to the destruction, fragmentation and division of Lebanon in order to establish an alternative Palestine on parts of its territory.
At the time, these attempts benefited from many errors and calls for the removal of Christian “privileges” from the Lebanese system. The world seemed convinced that the war in Lebanon was civil, a Christian-Muslim one, and that it was enough to amend some parts of the constitution to normalize the situation and stabilize Lebanon.
However, the subsequent events, and the upheaval, occupation and mandate that Lebanon experienced led to our country being placed under tutelage and maintaining a substitute army outside Lebanon’s legitimate structures, such that the regional powers no longer needed, in this emerging situation, to remain in Lebanon officially. Perhaps the pretexts that some had come up with to keep Lebanese territories occupied have been banished from memory, especially after Israel’s withdrawal from South Lebanon in 2000.
The factions who fought, clashed, offered thousands of martyrs, victims and disabled persons, and destroyed each other have become, over the years, united in the face of great upheavals, if not allies. The Middle East requires a rethinking because the revolution that almost saw the light of day after the Arab Spring and the subsequent blows did not produce democratic systems, and encouraged disregarding the Palestinian central cause, which is the other side of the requirements to establish a solid foundation for the future.
One day, which must be near, we would have to address honestly and frankly all these ambiguities and political images because Palestinian politics has changed after the emergence of Palestinian legitimacy on Palestinian land, albeit with different methods, and Palestine has deliberately adopted a policy of “dissociation” from the inter-Lebanese religious and sectarian tangle. I have witnessed this personally after going through three years at the Ministry of Justice, as frank and open cooperation had replaced the clashes and relations have become direct between two states that respect each another.
The time has come for drawing lessons from what happened. Its subjects are complex and thorny, especially after the other calamity has hit Syria and vast numbers of Syrian refugees have rushed to Lebanon without being aware of what happened in 1948 and beyond and without realizing that refugees in Lebanon alter its demographic equations.
No doubt that Lebanon must acknowledge its humanitarian, social, cultural and economic responsibilities, which raises the question: What is the Lebanese policy towards the displaced and refugees? How many times will we repeat that the only policy for Lebanon is to the “right of return” or returning return the displaced to their country?
If there is to be a dialogue, it is better to define a framework, program and agenda for deliberations, which would ensure going back to searching for the truth about what happened, to bring to light what was concealed, to seek openness and to exchange views. After all, Lebanon’s interests are in the interest of a just peace in the region.
Previous post
Next post