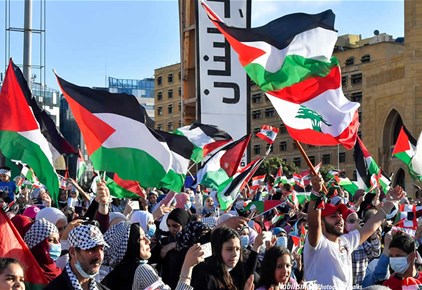 I will begin by extending my sincere condolences for the martyrs of the last Gaza war and imploring God’s care and providence for the wounded and injured. I salute the ability of the Palestinian people to remain steadfast and for their resoluteness to reclaim their land and obtain their rights and dignity.

The repercussions of the recent confrontations in Palestine are significant. We can say that after the May 2021 war on Gaza, the conflict in Jerusalem, the intifada of the West Bank and the people of Palestine 48 is not as it was before.

The Palestinian cause and the pursuit of its solution have returned to the international agenda and have become, at the same time, even more, important than the Iranian-American negotiations.

This confrontation made America wary of completing its negotiations with Iran before significant progress is made on the Palestinian cause, which has become an important issue that has imposed itself on the Biden administration – previously turning its back on it.

The issue of the Palestinian people struck at the heart and conscience of the left of America’s Democratic Party and in now, again, a controversial matter within Jewish-American lobby groups. These confrontations revealed a young Palestinian – and militant – generation committed to the cause, showing their intention to continue through sacrifice, conflict, and martyrdom.

Israel has made sure that imposing a solution on the Palestinians without their consent, even with unlimited support (as during the Trump era), is nothing but a mirage, and it has been convinced that a two-state solution must be tackled through negotiation and not by force of the fait accompli.

This confrontation also showed that there is now a balance of power and progress in favor of the Palestinians, in a way that the attack on Palestine, its people and land, has a military price, disturbing Israel economically, morally and politically, and unsettling its global image.

In Lebanon, the confrontation showed that the Palestinian presence is disciplined under the Lebanese administration and that the broad support of the Lebanese people for the cause of Palestine appears in an organized, rational and effective manner, without any chaos or the use of force. In the long run, the confrontation came in favor of the Palestinians and Lebanon because it restored interest in the Palestinian cause, finding a decent solution to it and facilitating the return of the refugees after giving them the tangible hope that that return is no longer a mirage.

In the face of that vital progress for the Palestinian people on the path to regaining their land and rights, the politically and economically crippled Lebanese situation is weighing heavily on the Palestinians in Lebanon. It makes their daily life and survival challenge greater on the refugees and us; thus, their confrontation is ours.

Working together is key to lifting the economic and political siege on Lebanon. Key, too, is isolating it from the struggle between the powers that surround us, and sparing it from the consequences of matters that are not in its hands to decide but which affect Lebanon and the refugees.

A joint effort must also be intensified in maintaining the security of the camps and following up on the firm policy by everyone not to plunge them again into Lebanon’s disputes, to enable both parties to work jointly on the Arab and international levels in support of the Palestinian cause, to improve the conditions of refugees, and ensure that any upcoming solution will not forget them, nor leave them in the camps of misery. It will even return them to their motherland.

There can be no real peace without the decent and rightful return of the refugees to Palestine, and this is what they want first and foremost.

After the formation of the government and progress in reforms for Lebanon, it is crucial to also return to the inclusion of the issue of seeking an Arab solution to the Palestinian presence across Arab countries – an issue that has been sending tremors throughout the region since 2011, and which made their presence even more difficult for all.

Easing the realities of their presence will facilitate job opportunities in the stronger Arab economies. Achieving this will alleviate misery and spread the goodness of education and public health in Palestinian societies.

The same is true for wealthy countries around the world – each must work to speed up their return and secure possible job opportunities for them according to labor laws and international assistance.

Yes, there are many common interests between Lebanon and Palestine. The awareness of officials from both countries has evolved to such a level where practical cooperation is in the interest of both the Lebanese and the Palestinians.