The youth of Nahr al-Bared camp, for whom dreams fade like the smoke of cafés 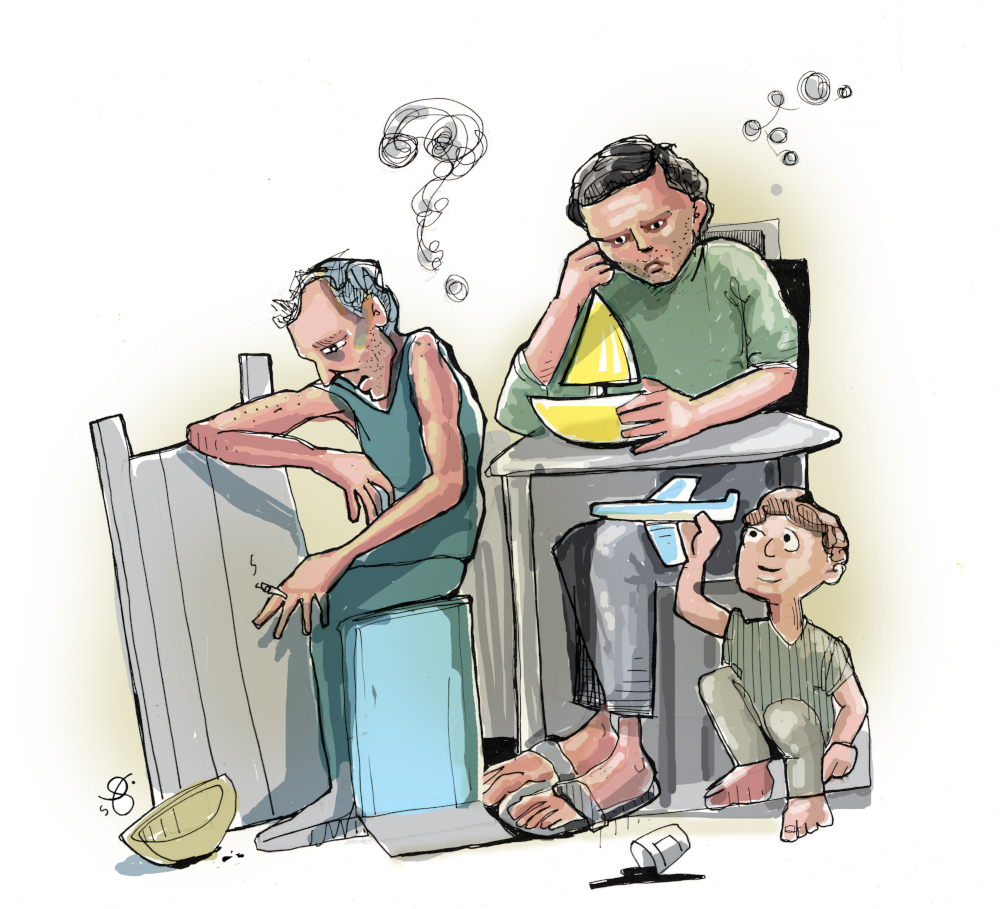 Young people are the human capital in the progress of societies. In northern Lebanon’s Nahr al-Bared camp, youth are present in large numbers, but progress is tenuous at best. All one needs to do is roam the streets or enter a café, and someone will speak honestly and immediately talk of their suffering, and you can see how their psychological state has made their young bodies age prematurely.

Travel is an obsession and unemployment a scourge

“I tried many times to emigrate, and I paid a broker, but I never succeeded. I got married and divorced in record time. The victim was a child – we gave birth to him for no reason,” says M.N., explaining that “the main reason for the divorce is my inability to pay rent for a home, so we ended up on the street, and the solution was divorce and each of us returning to our families.”

Musab Mansour, meanwhile, tells his story. “Because I underwent foot surgery, I stopped going to class when I was in the ninth grade. Afterwards, I didn’t finish school because I saw that most young graduates could not find work, so I stopped studying, stayed up late, and built-up debts. I am now 19 years old, and since 2019 I have been helping my father run a coffee stand on the street. We cannot rent a shop because what we earn in a day is barely enough for our basic needs and to pay rent on our house,” he explains

“Working in Basta is not my first choice, but it is my only available choice because I cannot find another job. My sole goal is to secure our livelihood for the day. I aspire to travel like others who emigrated to Europe, but in a legal way. I will not throw myself to my death in the sea or the deserts, and I will not leave my family with heartbreak because of me,” Musab.

N.N., 30, and with a bachelor’s degree in architecture, says, “If I work in my specialty, and this is rare, my effort will go to others. I draw the plan and design the buildings, and in the end, a Lebanese engineer’s name is put on it. Is this justice?!” He continues: “When I got married, the economic situation differed. The dollar was not as high as it is today, and I could secure our livelihood, but now I can’t at all.”

While Musab is against risking travel by sea, N.N. doesn’t care about the consequences, saying: “I want to travel, even in a pot in the sea. I want to secure a future for my two children and achieve a decent life so that they do not grow up and suffer what I suffer because I am a Palestinian refugee deprived of human rights in Lebanon.”

Amer Al-Hassan, 26, says that he is trying to find a way to travel. “I tried hard to secure the money needed to emigrate, to help my family. The economic conditions are very harsh, and they are among the most significant challenges facing young people in the camps, in addition to the rising unemployment and the camp being closed to us in every way,” he says

On the other hand, Amer Ismail, also 26, failed in his attempt to travel. “I studied business administration at the Siblin Institute for Vocational Training and Social Sciences at the Lebanese University, and I did not find a job in my major, although I studied two different fields. A year ago, I immigrated to Europe and was arrested, imprisoned in Hungary for 20 days, and returned to Lebanon. Despite that, I have not despaired and am still looking for a way to emigrate from Lebanon,” he says.

The searching for an opportunity

In the café, the group discussion intensifies between young people who reject illegal immigration and their peers who support it. Everyone, however, agrees on the need for equal opportunities and securing them, and that opportunity involves finding a permanent job, whether inside Lebanon or abroad.

Amer Al-Hassan says: “I studied air conditioning and refrigeration at the Siblin Institute and graduated in 2016. I have since not found a job as a specialist in the camp or outside. Most of the jobs required in the camp focus on the reconstruction of Nahr al-Bared camp, including painting, tiling, and tying steel rebar and so on, after it was the most important economic region in the north.”

M.A. confirms that “finding a job is not an easy thing” and adds: “I searched a lot, but I found nothing, the camp is closed in every way. There is no economic movement in it and no life as before. I did not complete my education because I did not like school, so I left it while I was in seventh grade. I took drugs for a while and stopped with the help of someone from the camp.”

He adds sarcastically, “I have achieved important feats in my life, including marriage, divorce, having a child, failing to find work, drug abuse, and all that before the age of 21. I deserve to enter the Guinness Book of World Records for failure. Unemployment is enough of a reason for my turning towards drugs and my sense of despair and frustration. Yes, I took the wrong path, and there are many like me. On the other hand, some people find individuals to help them, but they are few. The camp lacks institutions that take care of young people and their affairs. There are sports clubs in the camp for football and bodybuilding and kickboxing, but all of those require monthly subscriptions.”

Musab agrees. “Unemployment leads to drugs, theft, fraud, etc. Despair often pushes young people in this direction, or they get involved in it without realizing,” he says.

Amer al-Hassan quips, with a hint of despair, that “unemployment in the camp hinges on the number of cafes, which in the Nahr al-Bared camp alone number about a hundred, and unemployment is the main reason for delinquency and the trend toward theft, drugs and other things. Many of the camp’s youth go to cafes, and those who don’t have the money for a cup of coffee and a hookah, you see them in the corners of the camp, while others belong to football, weightlifting or martial arts clubs.”

N.N agrees and says: “The sports clubs belong to the Palestinian organizations. The Palestinian youth in the camp are a marginalized group. They need someone to support them morally and materially by establishing productive projects so that they do not remain dependent on the community.”

M.A. points out that “most young people have no place to go to pass the time. Like most of the camp’s youth, we spend our time in the streets and cafes, but I cannot go to cafes a lot because I do not have the price of a cup of coffee, not even a cellphone.”

Less than zero, with no future

At the height of despair, Amer says: “I don’t think about marriage at all. If I can’t secure my future, how can I secure my children’s future? Isn’t it unfair to bring them into an uncertain situation, not to mention the injustice against a person who has no fault but that she married a miserable refugee?” As for Musab, he wonders: “How do I think about marriage when I am less than zero? I think I will never get married any time soon.”

N.N. believes that the challenges facing the youth in the camp, which are the high prices, unemployment, drugs and the closure of the camp, come on top of the challenges facing Lebanon’s entire population, such as the gasoline crisis and the catastrophic economic collapse. Amer Ismail, meanwhile, believes that “we have no future in Lebanon, and I do not want my children to experience the same suffering as me. Unemployment is rampant like epidemics, and its danger is imminent and deadly as it evokes psychological problems, divorce and orientation toward social sicknesses such as theft and drugs. Young people want to earn a financial income, and not just play sports for fun.”

All the youth agree that the relationship with the surrounding Lebanese areas was destabilized in the period after the battles of the Al-Bared camp, but that it has returned to the way it was before. The camp is connected to its environs through intermarriage, friendship, fellowship and work. And one of the young people points out that the situation of Lebanese youth, especially in Tripoli, has become similar to their Palestinian counterparts.