Time has erased our differences, we must move on 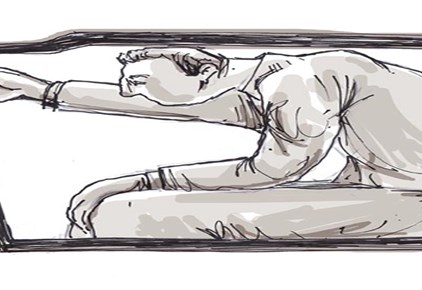 * Lebanese researcher and analyst at Synaps, a specialist in the criminal justice sector in Lebanon
Growing up in Lebanon, I could not escape stories about the 1975 war nor the consequent stereotypes about Palestinians. Like many Lebanese, I thought of refugee camps such as Ain al-Heloue or Nahr al-Bared only as dangerous places full of drug lords, criminals, and extremists. But when I first set foot in a Palestinian camp two years ago, I found that it was barely different from the rest of Lebanon, aside from a few resistance posters and graffiti. Young people were sitting in cafes, sharing dishes, and laughing together while smoking narghile.
This first experience set me on a long research process, to get to know the people who had felt so foreign even though we speak the same language and live side by side. I met families who, just like ones in my community, were struggling to get by while holding out hope for better days. The youth I befriended in Bur al-Barajneh were not the delinquents, drug addicts and terrorists I was taught to expect: We ended up talking at length about Star Wars over coffee. Most conversations, on our daily routines and dreams for the future, echoed those I usually have with my Lebanese peers.
This is not entirely surprising given that our generation did not experience, first-hand, the traumas of the Lebanese civil war; indeed, we were not even born when Lebanese and Palestinian militias fought against one another. I now believe that time has erased many of the differences that stood between Palestinian and Lebanese youth and it is up to us to take the reins and start a real dialogue.
Such dialogue will require tackling Palestinian stereotypes on both a political and social level. Lebanese communities remain scarred by the civil war, fear demographic change through the refugees’ naturalization or tawtin, and resent competition over jobs in a depressed economy. Lebanese authorities, meanwhile, still view Palestinian refugees largely through a security lens—as a threat to the country’s security and stability. For their part, many young Palestinians told me that their first real contact with Lebanese didn’t occur until they attended university.
Like most people in Lebanon, I grew up with distorted opinions of the other side that stemmed, in part, from a poor collective memory of the war. Lebanese society was never given the chance to mourn the atrocities of the war and find ways to move past them. No memorials were built, no commemorative plaques were hung, and no common history has ever been written.
The resulting misunderstandings permeate even the most basic views of one another. Lebanese are often surprised, amazingly, when I tell them that Palestinian camps are not made of tents but buildings, shops, schools, restaurants, and cafes. The sight of the bustling market street in Beddawi camp would come as a shock to most of them. In fact, major cities like Tripoli, Beirut, Saida, and Sour have absorbed Palestinian camps into their own urban fabric to the point where they have become virtually indistinguishable from other popular neighborhoods. Yet the communities remain as distant as ever.
The estrangement is not just psychological. Lebanon’s 175 000 Palestinians, who live in 12 camps as well as various towns across Lebanon, still do not enjoy basic access to education, healthcare or employment. Moreover, Palestinian youth are confused and torn between the resulting sense of banishment from Lebanese society and their increasingly fragmented Palestinian identity. Having nowhere to look back or forward to, young Palestinian men and women are in a state of limbo. Not unlike many young Lebanese, they oscillate between hanging out with friends, desperately seeking a job, and pinning their hopes on emigration. “If you give them a visa to Germany, they will all leave,” a Palestinian shopkeeper once told me.
The majority of Lebanon’s political class consistently argue that they support the Palestinian cause, especially regarding the right of return. But the argument of tawtin precludes any solidarity vis-à-vis Palestinian in Lebanon itself, where refugee communities are increasingly dependent on international aid. Perpetuating this status quo is a charade: It does nothing to safeguard the right to return, address mounting socioeconomic problems among Palestinians, or ease Lebanese fears. Sadly, the multitude of international donors and humanitarian actors involved have done little to bring the two sides closer together. Young Palestinians and Lebanese, however, now have the opportunity to do what their parents did not: accept one other.
This likely will be a long and trying process. To start, I encourage more Lebanese youth to simply visit Palestinian camps, to see for themselves. Palestinian NGOs could also develop programs to encourage Lebanese and Palestinian youth to meet and share their remarkably symmetrical experiences. International donors should support such projects and internalize the idea that fostering such cross-community dialogue is critical to any meaningful work on the Palestinian issue in Lebanon.
In 1948, Lebanon opened its borders to provide Palestinians with much-needed shelter. Seventy years on, Palestinians are still treated as strangers at best, if not dangerous invaders. It is time to put our humanity forward, dissociate our fear of tawtin from the need to guarantee basic human rights, and provide dignity for a population that, for now, has nowhere to go.
Previous post
Next post