To Respect The Refugees’ Right to a Dignified Life 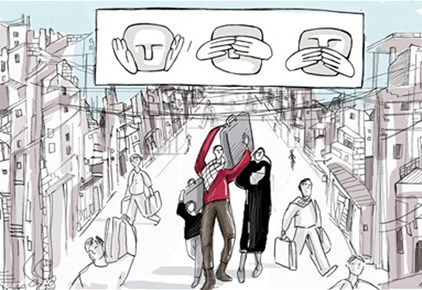 In our ministerial statement of the 74th Lebanese government after independence and the first in the era of President Michel Aoun, for which we chose the title of “Restoring Confidence,” we stressed the importance of strengthening the Lebanese-Palestinian dialogue.

​
Just as “restoring confidence” is the right of the Lebanese that we owe to them by restoring their confidence in national accord, their State and their institutions. It is also the right of the Palestinians that we owe to them. We must reaffirm our commitment to the Palestinian cause, which was always present in our political discourse.
​
Because confidence is our country’s most precious possession. Restoring it as soon as possible can only be achieved by consensus and interaction between the different Lebanese political forces, by going into various issues with a cool head and democratically, as we live in a democratic system based on dialogue and interaction.
The Lebanese chose dialogue among themselves in the interest of Lebanon and its stability, and because no one wants to go through a civil war again. The Palestinians also chose dialogue through the declaration of “Palestine in Lebanon” and in practice after the Civil War. Through the Lebanese Working Group on Palestinian Refugees, which included Lebanese political forces of all persuasions and affiliations, we have reached a deep Lebanese understanding of how to deal with the Palestinians in a manner that respects their basic right to a decent life until their return to their homeland, while upholding the provisions of the Constitution in terms of rejecting settlement clearly and consistently through: Paragraph (i) of the preamble to the Constitution, which states that “Lebanese territory is one for all Lebanese. […] There shall be no segregation of the people on the basis of any type of belonging, and no fragmentation, partition, or settlement of non-Lebanese in Lebanon.”
Today, in the face of the challenge of confronting Israel’s belligerent intentions, its clear plans to reject all efforts to achieve peace and its renewed threat to declare war on Lebanon, we must implement an inclusive policy whose main concern is the interests of Lebanon emanating from its Arab context while remaining committed to the Palestinian cause. This policy requires us to rise above conflicts and polarization. Our duties to the Palestinians living on our territory must not be a point of contention. We must work together so that the international community fully assumes its responsibilities and contributes continuously and uninterruptedly to the funding of UNRWA, which is suffering from a financial crisis that will inevitably and negatively affect the needs of refugees in Lebanon. We all know that the reality in the camps is tragic and the Lebanese state should not continue to simply watch this reality and it is exacerbated to become an unsolvable issue.
The official Lebanon has reaffirmed that it will not relinquish the right of the Palestinian people to return to an independent state with Jerusalem as its capital. The Lebanese, of all persuasions, stressed that they are not an obstacle to any project that allows Lebanon to shoulder its responsibilities towards the Palestinian refugees. Lebanon will not shirk its duties, and it has stressed before international forums that there is no room for settlement or any action contrary to the right of return. Our position does not contradict at all with granting refugee brothers their human rights. In fact, giving them these rights provides us with the strength necessary to face the difficulties we face at various levels, political, economic or subsistence, and restore the strength of sound bilateral brotherly relations.
Previous post
Next post