UNRWA and Remote Education: Two years of no interaction 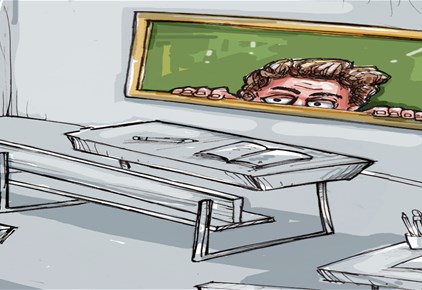 Educators understand the current administration at UNRWA in Lebanon is not capable of managing and developing the remote education process; not because teachers and staff are inefficient, nor that the process requires millions of dollars, but because it’s been over a year and a half since on-site education was suspended in March 2020. In the meantime, officials at UNRWA took no steps towards developing a plan and a strategy upon which the new school year could start, considering the COVID pandemic developments.

Blended education – a combination of remote and in-class learning – is the Lebanese Ministry of Education’s format for the new school year. It is also the plan adopted by UNRWA, months after failing to upskill teachers and principals to manage and run the remote education process, over the period since on-site education was suspended in March last year.

This has been made especially evident through the embarrassing incidents we’ve seen where teachers were unable to use tools such as Teams, Zoom, or other technology, and through providing minimal teaching through lessons in the form of voice notes on WhatsApp or a few videos that were distributed to students.

A year ago, UNRWA’s officials in Lebanon estimated that 71% of students had interacted with the remote learning plan adopted by the agency, as had been previously stated by Salim Deeb, the Head of the Education Program at UNRWA.

However, a study by the Palestinian Center of Documentation and Information indicates that the education process was not interactive due to having over fifty students within the same classroom to reduce costs and save money, following UNRWA’s termination of a large number of teacher’s contracts due to the financial crisis it is facing.

Furthermore, electronic devices were only distributed to a few schools, and supervisors were overwhelmed by having to oversee the teaching process in too many classes. According to one of the supervisors, they left things up to teachers’ ‘ethics’.

Notably, KG classes in some schools are the only shining example among all other grades, as they are being monitored and supported by donors, spearheaded by the French Embassy in Beirut.

Teachers across different stages (except KG) were not trained on any electronic tools available for remote education, which are many and easy to use.

As for the students, no one cared about their ability to access electronic learning channels, to access the internet, or whether they always had a laptop and a smartphone available. An additional and unmeasured burden exists through the electricity and fuel crisis Lebanon is now facing.

A secondary stage teacher confirmed that “all attempts by principals to train and upskill teachers were initiatives by only a handful of committed individuals” and that this is one of the issues with UNRWA’s performance.

“It would have taken no more than two months to train and upskill teachers. This, of course, is not just about how to operate the platform used in the teaching process, but should also cover training on how to make electronic presentations of written lessons, much like a teacher would write on a board in the class so that they can share it with students”.

The response of educational staff to the COVID pandemic was very swift after the lockdown, especially in creating WhatsApp groups and adopting plans in schools to finish the school year, according to Hassan Al Sayed, a member of the UNRWA’s Teacher’s Union.

However, instead of upskilling teachers to use interactive educational platforms, UNRWA chose to launch, this April, a digital educational platform for nearly 540,000 Palestinian students who are children of refugees in Jordan, Syria, Lebanon, Gaza, and the West Bank, where educational videos and instant tests can be uploaded for students.

In effect, this means less interaction between teachers and students, which is a significant challenge facing students who need to interact with a teacher for discussions, questions, and the ability to understand the curriculum.

Can we go back to on-site or blended education next year?

According to many, going back to schools represents a real threat to the health of students, teachers, and their families as the pandemic continues. According to Hussein Jawad, an educator, a health protocol must go hand in hand with an education protocol, inside and outside schools. No matter how perfect the health measures adopted in schools are, they could be rendered ineffective if students are transported from their homes to schools in overcrowded school buses.

According to Mohamed Samaha, representative of Al Mustafa Schools in the Educational Institutions Union, a similar concern was shared by private schools, so they decided to abide by the instructions of the Minister of Education whereby they do not take any responsibility for an outbreak among students and teachers and their families. As per Samaha, the educational process requires “a minimal level of attendance, especially at KG and G1 stages”.

This plan was supposed to be commissioned by September 28th. However, an increasing number of COVID cases, exceeding 1,000 patients a day, led to a state of confusion within the Ministry, leading it to postpone the beginning of the school year until November 12th.

During that period, schools hadn’t obtained sanitizers and thermometers they were targeted to receive. A state of confusion led the Ministry to take row back the possibility of sending all students to schools and have on-site classes for only students in transition grades.

UNRWA schools, in particular, suffered more than most due to the high density of students in each class, making it impossible to adopt this plan.

Blended learning thus seems the only realistic solution available to the Ministry of Education and UNRWA, as it ensures students receive at least half the curriculum on-site, especially under such obstacles facing students at home due to poor or no internet connection, lack of electronic devices or laptops, and repeated power outages. Hence, what students get from remote learning becomes complementary to what they get on-site.

The coming school year is expected to start by adopting a postponed plan that the Ministry of Education had approved, whereby stages are divided into two groups in the first term, each comprising 50% of the total students in the grade, with a maximum of 18 students per group, thus ensuring the required social distancing.

Group 1 will attend all days of the week, followed by Group 2 the following week. Group 1 will conduct remote learning while Group 2 is on-site and vice versa. Official working hours of teachers will remain the same.

However, according to Samaha, blended learning requires the adoption of two plans in parallel:

1: A plan developed by the Ministry to enhance the remote learning process. It cannot always rely on 50% in-class attendance and think of online as a luxury, considering the uncertainty that classes will be open for students or that students in transition grades and G11 will attend their classes.

2: A national plan the government should develop as part of an emergency health plan. This should include public safety measures in transport, thus ensuring students get to schools in proper health conditions that observe social distancing. This is if vaccination campaigns fail to reach a level that genuinely provides herd immunity that protects students, teachers, and their families.