What the Deal of the Century Means 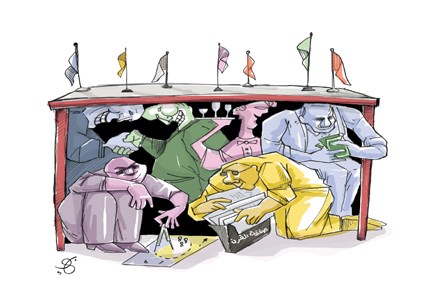 A Lebanese journalist, expert on Israeli affairs
For more than a year and a half, the American team headed by Jared Kushner. President Donald Trump’s senior adviser, has been working on “the deal of the century” to resolve the Palestinian-Israeli conflict. So far, the details of the plan have not been announced, but many of its components have been leaked, perhaps in an attempt to capture the public’s reactions, especially since the negotiations held by the American team have hitherto been limited to Israelis and a few Arab leaders after the Palestinian leadership’s refusal to hold talks with it in protest against the U.S. president’s decision to move the American Embassy to Jerusalem.
How has the Israeli government dealt with this plan in light of the geopolitical changes that have taken place in the region? To what extent does this plan correspond with the rightist Israeli ideology of the ruling party in Israel?
A correlation between the American approach and the Israeli rightist stances
One of the most important points of convergence in the American-Israeli viewpoints on the new plan is that the “Deal of the Century” turns the Palestinian problem from a rights issue of a populace seeking to regain their land and demanding an independent state into a humane economic issue. The American team deals with the issues of historical conflict between the two peoples in the same way it would approach a business transaction, ignoring the national and communal factors that govern this long and bloody conflict, and this presents a fundamental weakness. “Despite the similarities between negotiations and agreements between two countries and negotiations in trade deals, there is a fundamental difference, which is that the national aspirations of the people are more durable than any agreement, and these aspirations cannot be controlled by leaders and will continue to be very strong”, said Maj. Gen. Gershon Hacohen. “A comprehensive deal for a complex conflict supercharged with national-religious dreams like the Israeli-Palestinian conflict is unreachable with the logic of a trade deal. How does one expect any people to give up their dreams?”
This American approach complements the deep-seated inclination of the reigning Israeli right-wing to strip the Palestinian cause of its national, ethnic and historical dimension, exploiting the turmoil affecting the countries of the region and the Arabs’ diminished interest in the Palestinian cause, to say that the Palestinian problem is a security and economic problem and that the solution lies in dealing with the issue of Palestinian terrorism and economic distress.
The second point of convergence is that the “Deal of the Century” rejects the multi-stage approach in the negotiations for a final resolution. Instead, the new plan aims at reaching comprehensive negotiations that would lead to a final resolution. This is a point for the right-wing Netanyahu government, which is not required to make any concessions to the Palestinians at the moment. It can move forward in enforcing its reality on the ground, building Jewish settlements in the West Bank, and pretending that it is the party that responds to the efforts of the American peace team, contrary to the Palestinian party that refuses to cooperate with it.
However, this American approach is riddled with flaws, according to national security adviser Shimon Arad, who stated, “The new approach cannot create trust between the two parties, trust needed to overcome the fundamental difficulties that will arise during the negotiation process. The lack of trust will render the negotiation process fraught with crises and jeopardize the entire peace process” .
The third important point in the “Deal of the Century”, which coincides with a current Israeli goal, is the role it is giving to some Arab countries. Israel is presently seeking to exploit its anti-Iranian role in the region in order to get closer to it. According to leaks from the American team’s tours of some Arab countries, these countries will finance economic projects to rebuild Gaza and support the Palestinian Authority in the West Bank, with emphasis on Gaza as a free trade zone between Gaza and Al-Arish, as well as execute large industrial projects, with two-thirds of their workers from Gaza and the remaining third from Al-Arish . But the American proposal collides with more than one obstacle: The problem of East Jerusalem; talk of the establishment of a Palestinian state in Areas A and B, as well as parts of Area C in the West Bank; and the recognition of Gaza as a separate entity, a scenario that raises concerns at the Palestinian Authority, which views this as a subversion against its leadership of the Palestinian people and an Israeli-American perpetuation of the internal division.
In marketing the “Deal of the Century”, the American team uses the “positive motivations” method on Israel, and the intimidation and added pressure method on the Palestinians. Among the motivations are the transfer of the U.S. Embassy to Jerusalem, the declaration of Jerusalem as the capital of Israel, regional privileges and economic aid.
Conversely, Americans exert pressure on the Palestinians, for instance, by shutting down the office of the Palestine Liberation Organization in the United States, reducing UNRWA allocations and warning Palestinians that they will lose everything if they do not join in the negotiations.
Despite all the leaks about the announcement of the “Deal of the Century”, Israeli presumptions tend to be pessimistic after the American team’s final tour of the region in June last year. What is clear today is that the “Deal of the Century” still needs a lot of work before going public. In the meantime, Israel remains the biggest winner, whether or not the plan succeeds.
Previous post
Next post