Mneymneh in the Launching of the Palestinian Human Rights File 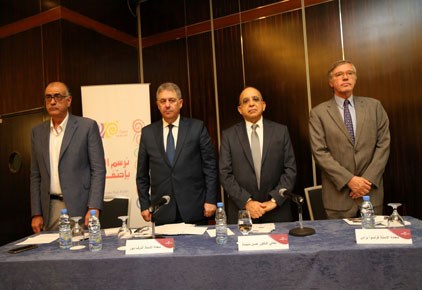 LPDC Chairman and former minister Dr. Hassan Mneymneh delivered a speech on the occasion of Masar’s launching of its file on the “Palestinian Human Rights of Palestine Refugees in Lebanon” yesterday on Thursday, July 28, in Crowne Plaza Hotel, in the presence of Swiss ambassador Francois Barras, Palestinian ambassador Achraf Dabbour, President of Masar Kamal Chia, and a number of representatives of Lebanese and Palestinian civil society organizations and international organizations.

During the launching, NGO President Chia and ambassadors Dabbour and Barras each delivered a speech, then a short documentary was projected and discussions took place, involving means to put this text into effect.

Highlights of Dr. Mneymneh’s speech were as follows: We are speaking together on the importance of the rights for Palestine refugees. I recall today the scenarios being arranged for Ain el-Hilweh camp spreading over the media on an almost daily basis.

Scenarios that are evoking the camp as a security spot, a source of risk and a threat to Lebanese stability.

Some even depicted it as the new “Arsal” in Lebanon. Those people ignore the real nature of the camp, as being a humanitarian habitat that accommodates in its neighborhoods around one hundred thousand refugees that have been displaced from their homeland for almost seventy years, together with populations recently displaced from Syrian camps. Moreover, there are people who are trying to stigmatize the Palestinian youth as being members of extremist groups. We have repeatedly asserted that extremism can only be confronted by building a better future for those persecuted as an alternative to the loss of hope and the existing despair.

He added: We at the LPDC are fully convinced that a radical solution should be political and developmental, where the security issue is incorporated as a complementary not a major factor. The development of the Palestinian community generally, and the youth more specifically, is the best way to confront the attempts of stigmatizing the camp as a terror stronghold. We see that this maintains the essential character of the camp, as being a homeland for resistance against the Zionist occupation of Palestine on one hand, and as a strong bulwark in the face of dispersion on the other hand. In order to reach such a purpose, we are in need of a Lebanese-Palestinian political, popular and media effort asserting that the Palestinian camp was not, and will not be a dagger in the back of its population and surroundings, nor in the back of Lebanon. We are confident that no one in the camp or in Lebanon, with a shred of humanity and patriotism, wishes to relive the experience of Nahr el-Bared camp that we are, altogether and with our partners, still trying to overcome, while still seeking to ensure the return of the camp inhabitants to their homes with honor and dignity. I am confident, dear brothers, that we both refuse to pay the price twice, for we have learned the lesson well, and this shall always remain enlightened in our memory, illuminating our daily practices

I intended by mentioning this to respond to what is being circulated by setting the record straight. Thus, I commend Masar’s initiative, given that it is a Lebanese NGO seeking to grant Palestine refugees their civil rights, after long years of deprivation.

We say yes to every effort aiming at advocating rights or ensuring the pathway for amending unjust laws, which interacts and complements the role played by LPDC, in striving to support creative initiatives, whether made by Lebanese or Palestinian associations. Our actual aspiration remains in changing the public policies in Lebanon and establishing a real partnership where roles are distributed and complemented between both the two peoples and communities, and turning this orientation into political prospects. All this would pave the way to build a common memory that learns from the lessons of the past, and eventually build a future based on dialogue, work, education and the adoption of human values and natural rights on all levels.