Roundtable Discussion on the Conditions of Palestinian Refugees from Syria 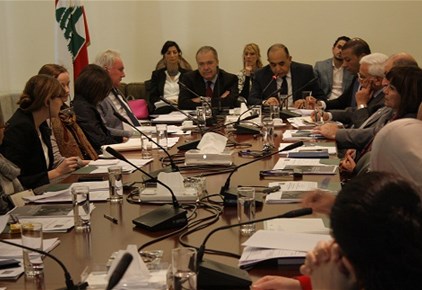 The Lebanese-Palestinian Dialogue Committee (LPDC) and AUB’s Issam Fares Institute (IFI) for Public Policy and International Affairs co-organized a roundtable discussion on Palestinian refugees from Syria at the Grand Serail, in the presence of representatives from embassies of the donor countries, the Ministry of Interior and Municipalities, the Ministry of Social Affairs, the Director of UNRWA Affairs in Lebanon Matthias Schemale, along with a number of academics and researchers.

The roundtable began with an introduction given by former minister Dr. Hassan Mneymneh, chairman of LPDC, whereby he stressed the importance of this issue in that it involves refugees who are experiencing a double displacement, after their first displacement from Palestine. He mentioned that PRS also suffer from dual marginalization, as the aid and protection they receive and the challenges they encounter are incomparable to those of their fellow Syrian refugees. Lastly, he urged UNRWA to maximize their urgent services in the sectors of education, health, food security, and shelter, though he specified that this should not absolve the Lebanese state of its responsibilities as a host country.

On the other hand, former minister Dr. Tarek Mitri, director of the IFI, highlighted the mitigating role that LPDC may play in making sure PRS are treated in accordance with international humanitarian rights. Mitri stressed that the double displacement encountered by this population prompts them to demand to be treated as refugees and not merely foreigners. He continued to say that IFI harnesses policy-related research with the aim of facilitating dialogue between knowledge producers and decision-makers, while cooperating with international organizations and neighboring countries. Mitri concluded by stating that the ultimate purpose of this discussion is to create an action platform to alleviate the impact of injustice suffered by PRS today.

Following the opening remarks, Dr. Sawsan Abdulrahim, Associate Professor at AUB, presented the findings of an extensive study entitled “Profiling the Vulnerability of Palestine refugees from Syria Living in Lebanon 2015.” The study focused on the demographic distribution of an estimated 44,200 PRS living in Lebanon. The assessment profiled the PRS population according to various sectors, including economy, education, food security, health, protection, shelter, water, sanitation and hygiene. In addition, Dr. Nasser Yassin, Director of Research at the Issam Fares Institute, presented the findings of a study conducted by the Institute entitled “Double Refugees: The Crisis of Palestinian Refugees from Syria in Lebanon”. Yassin’s study included 21 interviews with key stakeholders in Ain al-Hilweh. Study findings drew a comparison between the status of Syrian refugees and that of PRS. Differences in terms of international response, protection and services offered were highlighted, with emphasis on the higher vulnerability of PRS.

The roundtable discussion shed light on the importance of coordination between concerned parties, including UNRWA, LPDC, the Ministries of Interior and of Social Affairs, international organizations and donors, as well as the need to enhance both financial and human capacities for the continuous support of PRS.