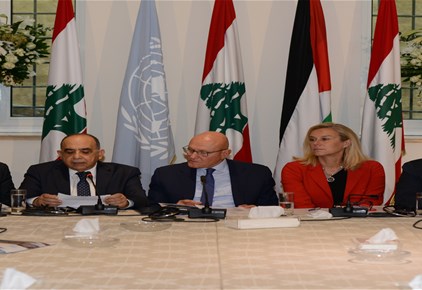 The Lebanese Prime Minister Tammam Salam chaired a meeting to discuss the ongoing plight of the Palestinian refugees displaced from Nahr el-Bared Camp (NBC), ten years after its destruction.
The meeting was attended by the Chairman of the Lebanese Palestinian Dialogue Committee Dr. Hassan Mneymneh, United Nations Special Coordinator for Lebanon Ms. Sigrid Kaag, the Commissioner-General of UNRWA Pierre Krähenbühl, Mr. Azam el-Ahmad and Palestinian Ambassador Ashraf Dabbour.
The attendees discussed ways to move forward on the issues of the displaced Palestinian Refugees through contributions. The amount contributed with by Germany, Italy and the European Union reached US$ 36.1 million. Therefore, the UNRWA, the Lebanese government and donors will ensure the full reconstruction of Nahr el-Bared, which will enable 72% of the originally displaced Palestinian Refugees to return to the camp.
Dr. Mneymneh specified that “the contributions are positive indicators of the international commitment to this instrumental project”.
Krähenbühl stated “I would like to thank PM Salam for supporting Nahr el-Bared Reconstruction Project following his statement at the London Syria Conference”. He also highlighted UNRWA’s commitment to complete NBC’s reconstruction and support to the return of displaced Palestinian families.
According to Ambassador Dabbour, the Palestinian community appreciates the progressive efforts made by the Lebanese Government. He underscored the cooperation and partnership between Lebanon and Palestine “to move forward and provide a decent living for Palestinian Refugees in Lebanon”.
The UN Special Coordinator Sigrid Kaag declared: “When we try to mobilize political and financial support for the Palestine refugees in Lebanon in support of UNRWA’s mandate and leadership, we do so in equal measure to seek support to help Lebanon remain stable and secure”. She acknowledged that “Nahr El-Bared has become a symbol of destruction but I would also say resurrection. Although the competition and the difficulty over the completion of the construction and reconstruction of the camp is much overdue, Nahr El-Bared also speaks to resilience and shared commitment.”
PM Salam concluded the meeting by stressing on the Lebanese Government’s commitment to the improvement of Palestinian Refugees’ conditions in Lebanon especially NBC’s reconstruction, calling on all partners to fully and justly contribute to this event.