Dr. Mneymneh: Khalaf is the Icon of a Striving Arab Woman 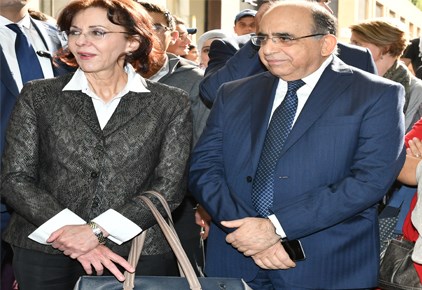 The Chairman of the Lebanese Palestinian Dialogue Committee, Former Minister Hassan Mneymneh, underlined LPDC’s support to the United Nations Under-Secretary General and Executive Secretary for the Economic and Social Commission for Western Asia (ESCWA), Rima Khalaf.
Khalaf resigned over withdrawal of the “Israel apartheid” report issued by ESCWA, that aimed to examine the core commitments of the international community to uphold the international law applied to the case of the Palestinian people, in defense of its rights including the right of self-determination.
Former Minister described Khalaf as the Icon of a Striving Arab Woman who is rejecting the repression practiced by the Israeli authorities and facing takfiri theologies and practices. She is battling as well, the historical Israeli oppression and domination over the people of Palestine. “She believes that she should up stand the human rights principles and values initiated by the international community for around 70 years”, added Mneymneh.
He stated: “Lebanon considers that this report confirms the rejection of racism and discrimination of all kinds.” He continued: “The content of this document is what Israel ignored since it imposed its authority on Palestine; hence resulting in the suffering and uprooting of millions of Palestinian Refugees”. He added that the pressure exerted on the United Nations has given rise to the ideology of force to overcome the power of right.
He finally called upon all countries and democratic forces to back the UN and its agencies to overcome pressure and to be aroused by this resignation in order to serve Palestine with justice.