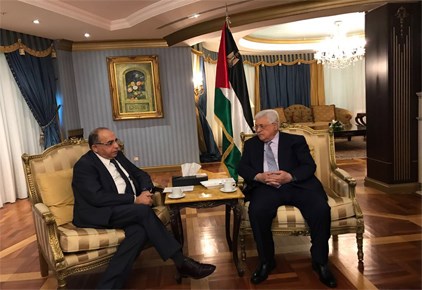 The Chairman of the Lebanese and Palestinian Dialogue Committee, Dr. Hasan Mneymneh, met with the President of Palestine Mahmoud Abbas in his residence at Habtoor Hotel during his visit to Lebanon. Discussions were related to bilateral relations and to the situation of Palestinian refugees in Lebanon. Mneymneh explained to Abbas that the Census Project of National Population and Housing in Palestinian Camps and Gatherings was initiated during the first week of February, under the patronage of Prime Minister Saad el-Hariri. It will be conducted by LPDC in partnership with the Lebanese Central Administration of Statistics and the Palestinian Central Bureau of Statistics.
The Ambassador of Palestine in Lebanon, Ashraf Dabbour, and members of the Palestinian Government accompanying President Abbas attended the meeting. The President stated that he noticed during his visit to Lebanon that “The Palestinian cause is in the hearts and minds of the Lebanese people”. He assured: “We want the Palestinian presence in Lebanon to be positive, the cooperation to be tight and the points of view to be common in order to prevent problems and conflicts”. Abbas added that the rights of Palestinian refugees should be dealt with fraternity and love and that rights should be given fairly for our benefit and for the hosting countries’. He claimed: “Lebanon has been hosting us for 70 years, therefore we should work ourselves to find solutions in cooperation with Lebanese officials”.
Abbas pointed out the worrying situation in Ain el-Helwi camp by saying that “We are working with all Eastern and Western countries to find a comprehensive solution and as long as there isn’t any, the issues of refugees will not be solved. Solutions should satisfy both the Lebanese and Palestinian parties”.
Dr. Mneymneh presented to the Palestinian President a copy of a memorandum that reflects a common Lebanese vision on Palestinian refugees in Lebanon. The memorandum was adopted after two years of negotiations by a working group consisting of representatives of the main Lebanese parties: the Lebanese forces, Hezbollah, Amal Movement, Free Patriotic Movement, Future Movement and the Progressive Socialist Party.
Mneymneh stated “For the first time, this memorandum shows one common Lebanese approach regarding the Palestinian Refugees’ issues. Circumstances have become more positive and solutions more reasonable for the benefit of both the Lebanese and Palestinian parties”.