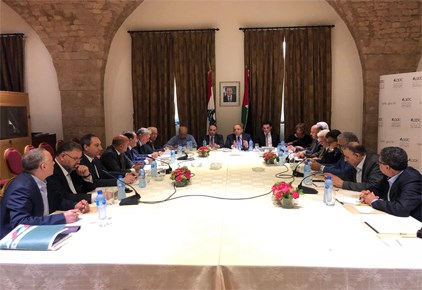 The Lebanese and Palestinian Working Groups on Palestinian refugees in Lebanon, composed of the Lebanese parties represented in the parliament and government; the Palestinian factions affiliated with the PLO and Palestinian National Forces Alliance held a joint meeting at the invitation of the Chairman of the Lebanese-Palestinian Dialogue Committee (LPDC) Dr. Hassan Mneymneh.
The meeting, held in the Grand Serail, comes on the eve of the “Manama workshop” under the pretense of peace for prosperity, while it aims to replace the legitimate national and political rights of the Palestinian people, in return for financial and economic projects, as if the rights of return and independent Palestinian state, freedom and live in dignity can be replaced by some donations and services.
The participants discussed reports relating to the American administration’s Middle East peace plan called the “deal of the century” and the grave dangers it poses to both the Palestinian cause and host countries. The participants concluded the meeting with the following statement:

First: Although the text of the so-called “deal” has not yet been published, the preliminary actions that have been emerged through the announcement of the economic plan and the leaks of its content, all that the plan’s aim is to the abolition of the Palestinian cause as the central Arab cause and the cause of the Palestinian people.

Second: The recognition of Jerusalem as the capital of the State of “Israel” and the transfer of the American Embassy to it; and the cuts in US aid to Palestinian and international institutions, especially those working to help refugees and alleviate the effects of the displacement that the Palestinians have continued to suffer for the past 71 years, confirm that the US administration seeks, in various ways and means, to substantiate the Israeli entity and to conform to its full expansionist ambitions.
Third: The annexation of the occupied Syrian Golan Heights to the state of the Israeli entity confirms that the dangers of the plan go beyond Palestine, its land and its people, to affect neighboring Arab countries, especially with Israel’s continued occupation of the Sheba’a farms, Kfarshuba and the Lebanese part of Ghajar village.
Fourth: As frequently stated in U.S. officials’ proposed plans and statements, the American administration has proven to be biased towards the Israeli narrative in defining as Palestinians refugees as those who were originally displaced in 1948. Insisting that the definition of refugee does not apply to their descendants, and eventually cuting-off funding from the UNRWA, is an attempt to deny them the right of return to their homes in compliance with Arab and international legitimacy resolutions.
Fifth: The US administration’s refusal to recognize the Palestinian people’s right to self-determination and to establish their independent state is a coup against Arab and international legitimacy resolutions that have led most countries to recognize the state of Palestine and stressed the need to establish it on Palestinian national soil with Jerusalem as its capital.

However, both Lebanese and Palestinian Working Groups believe that this project directly involves greater risks to Jordan, Lebanon, Egypt and Syria. Whereby manipulating the maps of these countries and permanently resettling 5.2 million Palestinian refugees – by UNRWA estimates – outside their country of origin which they have been displaced from, would represent a new fragmentation of the Arab region and run counter to the aspiration of their people to live in independent and stable states and entities in a climate of tolerance, justice, democracy and the respect of human rights.

As a result, the two groups calls to:

1 – To reject the provisions of what is called “deal of the century”, deem all its effects null and void, and decline to deal with it and reject all its related consequences, including the next workshop in Bahrain.

2 – Considering that the implementation of such a deal would put both Lebanon and the Arab world at the mercy of dangerous schemes, the two groups call upon to take the initiative to strengthen coordination and cooperation mechanisms in all efforts that would undermine the plan dubbed as the “deal of the century,” especially with regard to issues relating to refugees and their right of return; for any attempt to impose a permanent resettlement of refugees contradicts the fundamental principles of the Lebanese and Palestinian peoples. Furthermore, the rejection of permanent resettlement is clearly stated in the preamble of the Lebanese Constitution, and the charts of the United Nations and the League of Arab States reaffirm the inadmissibility of the acquisition of territory belonging to others by force and uphold the right of the Palestinian people to build its independent state.
3. The Lebanese Vision document affirms that the position about rejection of permanent settlement or “tawteen” is in compliance with the preamble to the Constitution, which stipulates that there shall be “no fragmentation, no partition and no resettlement.” This Vision also supports the implementation of the right of return and the preservation of the Palestinian national identity. Through this document, Lebanon upholds the Palestinian people’s legitimate national rights in general and those pertaining to the refugee issue. This stance has been positively welcomed by all the segments of the Palestinian population and representatives.
4. The rejection of the Palestinian refugees’ permanent settlement does not contradict the importance of emphasizing that the protracted presence of Palestinian refugees in Lebanon is necessitated by the continuous occupation of their territories. While the Lebanese and Palestinians are upholding the right of return as stipulated by international law, best mutual relationship are preserved in line with the “Lebanese Unified vision document”.
5. To urge the League of Arab States, collectively and as individual states, to play an effective diplomatic role through bilateral relations, in international forums and in the United Nations, with the aim of revealing, at various levels, the potential dangers of implementing this deal.
6.To organize various activities and events to inform Arab and international public opinion about the potential dangers of the so-called deal on regional and global security and peace, and thus encourage them to contribute and play their role in confronting it.
7. To call upon the Arab States and the International Community to support UNRWA both financially and dipolmatically duirng mandate’s renewal at the next UN GA sessions; and maintain the agency for being as a witness to the continuation of the occupation crime committed against the Palestinian people.
8. Calling upon the Arab states to provide necessary assistance to the Palestinian forces and institutions to continue their role in providing protection and assistance to the Palestinian people and to strengthen their steadfastness against the occupation and its projects.
The two working groups, as they sound the alarm, emphasize that they will continue cooperation to face the projects of settlement and all other projects aiming to abort the right of the Palestinian people to return to their land.