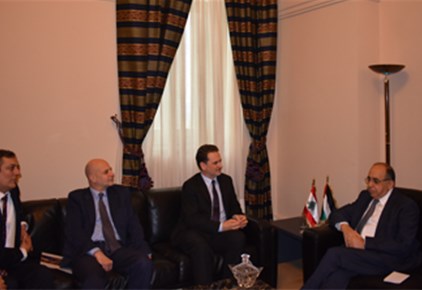 The Chairman of the LPDC Dr. Hassan Mneimneh, met at the Grand Serail the Commissioner-General of UNRWA Pierre Krähenbühl, with a delegation from the Agency’s office in Lebanon, including Director of UNRWA Affairs in Lebanon Claudio Cordone, UNRWA Head of staff in Lebanon, Hakam Shahwan, Senior Advisor to Commissioner-General Maria Mohamedi and Legal Officer Mary Chibli.
The meeting was an opportunity to discuss the regional and local situation and its possible impact on the work of the Agency and its services for Palestine refugees in host countries in general and Lebanon in particular. It focused mainly on the challenges faced by Palestinian refugees, in the light of the deficit in the agency budget due to unmet funding needs. Mneimneh pointed to the risks of decreased funding of the agency for the situation in Lebanon.  He stressed the need for  more steps to ensure a “sufficient, predictable and sustained” funding for the agency.
Krähenbühl confirmed his continuous efforts to find a solution for this deficit, pointing out to the ongoing efforts he is leading to encourage all donor countries and international organizations to provide more contributions. He agreed with Mneimneh on the need to call on donor countries to raise the level of funding UNRWA health and education programs and projects that benefit both refugees and host States instead of looking for ways to decrease expenses.