Mneymneh meets with the Director of UNRWA: US Administration’s decision to cut Aid to the Agency will further destabilize the region 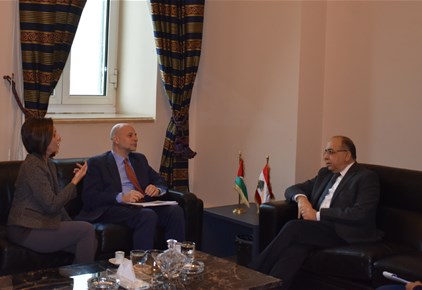 The Chairman of the Lebanese-Palestinian Dialogue Committee, Hassan Mneymneh, warned that the US decision to freeze 65 M US Dollars of its annual contribution to UNRWA, will further destabilize the region since it targets one of the most vulnerable communities.

In their meeting yesterday in the Serail, UNRWA Director in Lebanon, Claudio Cordone and Mneymneh discussed the decision’s implications on the Agency services in Lebanon and across the region praising UNRWA’s Commissioner General initiative to launch a global fundraising campaign in the coming days.

Cordone stressed that “the Agency will continue to provide critical services to its beneficiaries”.

Mneymneh warned of serious repercussions for the US decision over the humanitarian conditions in the Palestinian camps; and over the security and stability of the host countries.

“More seriously, the US cut decision conditioned to spend the contribution in Jordan, the West Bank and the Gaza Strip and denies the refugees rights to access service in both Lebanon and Syria which is unprecedented. It only signals political manipulation of Lebanon’s stability and security”- he said and “a completely unaccepted discrimination among the Palestinian refugees”.

Mneymneh pointed that UNRWA’s role shall be kept out the political bargaining in pressuring Palestinians and now Lebanese as well. The agency’s role should not be compromised, he said.

He reaffirms Lebanon firm position in supporting the continuation of the Agency’s mandate and work across all fields, especially in Lebanon.

Mneymneh warned that putting this burden on Lebanon, which is suffering from political tensions and deteriorating economic conditions, will lead to the strengthening of the climate of extremism, which may reflect not only in this host country concerned but might expand beyond our borders.

He expressed his concern that the American steps adopted by the Trump administration by closing the door to a real negotiation process constitute a perfect recipe for an explosion with no limits in a region already inflamed and in dire need of real political solutions.

Mneymneh stressed that the Trump Administration drift towards the Israeli government’s position in indicates that gradual dismantling of UNRWA; through financial means; is already underway. He said that “UNRWA cannot be blamed for sustaining the refugee crisis since its mandate is purely service oriented and humanitarian. But, the continuous need for UNRWA’s will remain as long as a just and sustained solution for their cause remains unresolved by those are accusing the agency.”

LPDC chairman concluded by urging the Arab and International community to intensify political and diplomatic talks with the Trump’s Administration tin support of UNRWA, stressing that “Prime Minister Hariri will work to ensure that the Agency can continue providing the much-needed services to the Palestinian population”.