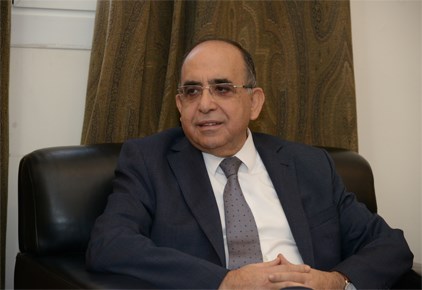 The Chairman of Lebanese Palestinian Committee, Former Minister Dr. Hassan Mneymneh, warned against the dangerous proliferation of extremism in Palestinian refugee camps especially in the Camp of Ain el-Hilweh. He stressed that “Palestinian refugees’ issues should be at the top of the national priorities’ list for Lebanon’s interest in the region”.
In an interview to Voice of Lebanon Radio, Mneymneh said: “The Census of National Population and Housing in Palestinian Camps and Gatherings in Lebanon was officially launched under the patronage of Prime Minister Saad el-Hariri”. This project will provide an explicit picture to the Lebanese Government on the situation of Palestinian Refugees in Lebanon. Therefore, the census will help finding solutions to prevent infiltration of extremists in camps by taking advantage of the miserable situation of refugees.
“The Lebanese Parties approved the Census to develop, in collaboration with Palestinian parties, appropriate policies and quick solutions for Palestinian Refugee Camps located in Lebanon”, said Mneymneh.
The Former Minister explained that LPDC would implement the census with the Lebanese Central Administration of Statistics and the Palestinian Central Bureau of Statistics, “This initiative comes in light of the government’s desire to improve Palestinian Refugees’ living conditions”.
According to LPDC Chairman, the censuses conducted by UNRWA, American University of Beirut or General Directorate for the Political and Refugees Affairs showed discrepancy in the estimated numbers. Nevertheless, this census is the first official one to publish conclusive results about Palestinian Refugees’ situation in Lebanon.