Siniora and Mneymneh Meet with the Palestinian Security Committee 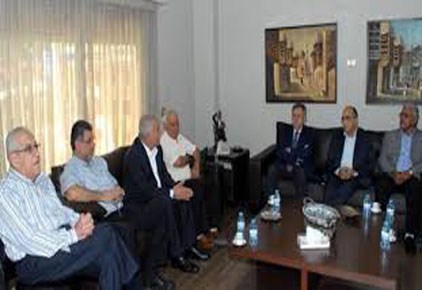 Former PM Fouad Siniora and LPDC Chairman Dr. Hassan Mneymneh met with the Higher Palestinian Security Committee, and discussed the security situation in the Palestinian camps in general, and in Ain el-Hilweh camp in particular. During the meeting, Dr. Mneymneh called for humanizing the situation in Ain el-Hilweh camp, instead of perceiving it from a mere security angle, amidst the unremitting efforts of the Palestinian factions and forces and their coordination together and with the Lebanese government, in order to establish an atmosphere of security and tranquility in the camp and prevent its use against its inhabitants and residents, and against Lebanon’s security and stability.

In a statement, Dr. Mneymneh considered that the common focus was on working together to spare the camp the attempt to picture it as insubordinate to the Lebanese government and its laws, and as a haven for Takfiri cells. He stressed the need to provide a decent life for the camp population, especially that it is the most populated and miserable of all camps on Lebanese soil; and this is what we will be working for alongside all Palestinian entities and the Palestinian embassy in Lebanon in the near future.

For his part, the Palestinian delegation spokesman said that “the Higher Security Committee affirms that Ain el-Hilweh camp is not and will not be a fertile ground for any group targeting Lebanon’s security and stability. We have demanded that light be shed on the camp from a humanitarian and social, not security perspective”. He finally expressed his hope that the meetings will carry on until positive outcomes appear in the future.