The Discussion of Lebanon’s Report by the (CERD) Against Palestinian Refugees at the United Nations – Geneva on August 10 and 11, 2016 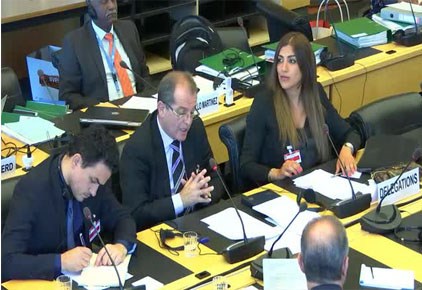 Allow me first to take some time to explain the Palestinian refugee issue in Lebanon; as we are well aware of its importance to your esteemed committee.

Therefore, I will discuss in a brief and centered manner 4 areas, prior to replying to the inquiries evoked yesterday by H.E. the Rapporteur who stressed that this item is “a serious concern”.

The main areas are as follows:

1- The Special Status of Palestine Refugees in International Law.

2- The International Responsibility through UNRWA.

3- The Absence of a Comprehensive Legal Framework.

4- The Beginning of an Institutional Change.

1-      The Special Status of Palestine Refugees in the International Law

Palestine refugees are classified as a special category of refugees according to international law. On one hand, they are not subject to the legal description of the 1951 Refugee Convention, according to article 2, paragraph (d).

Therefore, they do not benefit from the services of the United Nations High Commissioner for Refugees (UNHCR) in terms of a primary matter, which is the right to resettle in the host country or in a third country; hence the solid connection to the course of the relevant international resolutions, most importantly resolution no. 194 of 1949, stipulating the right of Palestine refugees to return to their homes and properties and to seek compensation; a matter that Israel, the occupant, still refrains from implementing to date.

Therefore, the international community was keen to grant the issue of Palestinian refugees a special character, and distinguished them from other refugees around the world.

2-      The International Responsibility through UNRWA

It is important to clarify, given that some members mentioned Lebanon’s responsibility as a host country to secure the basic needs of Palestine refugees, such as education and health care, that we will thoroughly detail shortly.

We consider that the responsibility for Palestine refugees is firstly an international responsibility, in light of the failure of the international community in reaching a permanent solution to their cause. Thus, The United Nations Relief and Works Agency for Palestine Refugees (UNRWA) will remain one of the most important expressions of this commitment, pending a comprehensive and just solution represented by their return to their nation and homes.

Established as a temporary agency by resolution no. 302 in 1949, UNRWA is mandated with relief and works for refugees.

The existing paradox is that the international community is now unable to support it with the minimum funds needed to allow it to keep up the relief, education and medical treatment of Palestinian refugees. And there it is today, suffering from an unprecedented financial shortfall exceeding 100 million dollars per year.

How is Lebanon, a country with very limited sources, expected to cover what the entire international organization could not?

3-      The Absence of a Comprehensive Legal Framework

Describing the public policies towards Palestine refugees in Lebanon as discriminatory lacks accuracy and objectivity. If Lebanon were to be a racist country, it would not have opened its borders to more than 100,000 Palestinians after the Nakba. It had not occurred to the Lebanese decision-makers and legislators, nor to the Palestinian refugees at that time, that the crisis would persist, and that the return will not occur after over seventy years.

It is relevant to mention that Lebanon then had welcomed the Palestinian refugees in 1948 merely 5 years after obtaining its independence. Also, the international system and mechanisms that regulated the refugee issues were not in place yet.

The series of tragedies and wars from the Israeli aggressions and the civil war in which the Palestinians took part, did not allow the Lebanese legislator since 1948 until recently, to take a look at the Palestinian refugee issue in its broader legal framework. Yes, we acknowledge that the absence of a comprehensive legislative framework has led to the absence of a legal personality that is in line with their special status in the local and international law. This confusion defines them as foreigners or Arab nationals at times, as stateless at other times.

4-      The Beginning of an Institutional Change

In spite of all the latter, the Lebanese government has made serious steps towards improving governmental policies through the creation in 2005 of an official entity in charge of dealing with the Palestinian refugees, under the designation of the Lebanese-Palestinian Dialogue Committee, attached to the Presidency of the Council of Ministers. In addition, the consecutive ministerial statements representing the orientations of the consecutive governments expressed their commitment to improve the livelihood and living conditions of Palestine refugees, and to seek through active diplomatic work to support their Palestinian national rights, namely their right of return.

I will now evoke the progress made regarding the issues of the humanitarian and social rights for Palestine refugees in Lebanon.

As for the issue of citizenship acquisition, and as we have previously explained, Lebanese and Palestinians consider that acquiring the Lebanese citizenship is a relinquishment of the right of return, in addition to being a demographic risk that affects the delicate social balance in Lebanon. In fact, the refusal of permanent settlement (Tawteen) is one of the key consensuses and common interests between both parties. Based on this, Lebanon is a principal supporter of the refugees’ acquisition of the Palestinian citizenship, especially following the approval of Palestine’s membership as a non-member observer state at the United Nations. In this sense, they are exceptionally holding a complex identity: refugees on one hand, and citizens of a country under occupation on the other hand. Lebanon has made a step forward in this regard by recognizing the state of Palestine and opening its embassy in 2011.

The intervention of the Rapporteur mentioned that the access to the public educational system is not guaranteed for Palestinians in Lebanon.

First, the responsibility of educating the refugees remains one of the most important obligations of UNRWA since its establishment and within its principal mandate, and its educational program consumes more than half of its budget. However and despite that, Palestinians residing far from UNRWA schools are still able to join the Lebanese public schools without discrimination. In the report you are holding, you will find in point 64 of article 5 a chart containing the numbers of Palestinian children enrolled in public schools. The numbers vary annually between 4 and 5 thousand children in the different educational phases.

Furthermore, the number of Palestinian students enrolled in the Lebanese public university vary from 2000 and 2500 students per year.

This responsibility also falls on UNRWA, and is within its obligations. The Ministry of Health facilitated an agreement between the Agency and the public hospitals, according to preferential conditions in terms of discounts on the hospital bill and several benefits related to tax exemptions and other procedures.

Moreover, the Ministry of Health covers the health cases that are not covered by UNRWA, such as dialysis, free vaccination campaigns, and certain special conditions.

The Lebanese government considers the issue of property ownership based on the concept of the right to decent housing. Accordingly, it is relevant to clarify certain issues.

First, the Lebanese laws relating to the regulation of ownership for foreigners handled the issue of ownership by Palestinians over decades after the beginning of their journey of asylum in Lebanon. The problems pertaining to this file broke out with the endorsement of law 296/2001, which imposed new legislative rules on this file, according to which the Palestinian ownership was linked to delicate and fragile matters in the Lebanese national and political life.

– With regard to the inheritance issue, based on the information and statistics issued by the General Directorate of Land Registry and Cadastre / the Ministry of Finance and which we can provide you with, it is clear that the transfer of ownership of a deceased Palestinian is automatically registered under the names of the heirs in the Directorate of Land Registry and Cadastre. Consequently, we categorically deny that any Palestinian refugee who owned property in a legitimate way, prior to the issuance of the law, is prevented from naturally transferring his ownership to his heirs.

– Camp Improvement Imitative (CII): Given that around 60% of refugees reside in Palestinian camps within a highly overcrowded residential area, the Lebanese government, in partnership with UNRWA, launched an initiative aiming at improving the infrastructure of the camps. It is important to note that the majority of the real-estates where the Palestinian camps are located are a property of the Lebanese government, and are put at the disposal of UNRWA.

The most important progress relating to the issue of access to the Lebanese labor market is the amendments introduced to the Labor and Social Security Laws in 2010, which I will not detail, as the latter were mentioned in the report you have.

There remains one important point that needs to be clarified, and which is related to the liberal professions that Palestinian refugees are allowed to practice. In this regard, it is important to mention that the law reserves to the syndicates the power to regulate their relevant professions, hence, the Lebanese government has no role in preventing or allowing the refugees to join these syndicates. That is first; and second, the syndicates themselves may sometimes, and according to the needs of the labor market, allow the refugees to become members, like what recently occurred in the Order of Nurses, which allowed the registration of Palestinians in this sector.

I would like to conclude by saying that our government is committed to continuously improve the conditions of Palestinian refugees residing in Lebanon, based on the Lebanese higher interest first, and the support to the inalienable national rights of the people of Palestine to return and compensation.